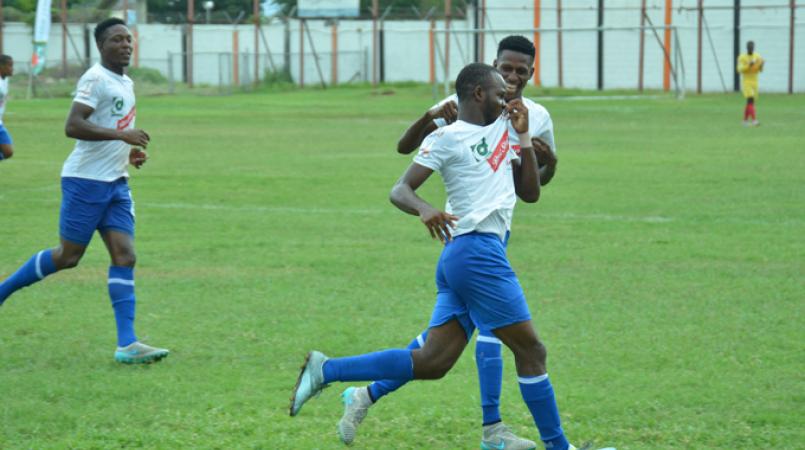 File photo of Portmore players after scoring a goal.

Ten-man Portmore United increased their lead at the top of the Red Stripe Premier League (RSPL) points standing on Sunday when they stopped UWI 1-0 at Mona Bowl.

Javon East was brought down inside the box and got up to score the resulting penalty in the 76th minute to secure the victory for Portmore, that moved them to 59 points, eight clear at the top of the league.

Cavalier, on 49 points, dropped to fourth in the standing, as they were held to a 1-1 draw by Dunbeholden at Anthony Spaulding Sports Complex, where Waterhouse will play their 29th round match in Monday's televised encounter against hosts, Arnett Gardens.

Dunbeholden are in ninth place on 28 points.

Leonard Rankin scored a 41st-minute penalty to give Cavalier the lead, with Lorenzo Dubidad securing the point for Dunbeholden with an equaliser one minute into the second half.

Cavalier ended the match with nine players and Dunbeholden with 10. Nicholas Hamilton of Cavalier and Kemo Gayle of Dunbeholden were sent off by the referee in the 30th minute for unsportsmanlike conduct, while Cavalier had Jeremy Nelson sent to the showers in the 63rd minute after picking up his second yellow card of the match.

At the other end of the standing, four-time champions, Montego Bay United, continue to maintain their optimism of staying in the league, as they stopped Reno 2-1 at Frome Sports Complex to join Harbour View on 27 points, but remained in the two-team relegation zone in 11th on goal difference.

Reno remained rooted at the bottom of the standing on 23 points.

In Sunday's other early match, Mount Pleasant Football Academy defeated Humble Lion 1-0 to move into third position ahead of Cavalier in the standing on 50 points, with Humble Lion remaining in eighth spot.

Francois Swaby scored on his former club in the 13th minute, which provided Mount Pleasant with the win, as Humble Lion also had the challenge of veteran Wolry Wolfe being sent off in the 70th minute of play.

Harbour View and Tivoli were scheduled to play later on Sunday at the Harbour View Mini Stadium.

At UWI Bowl, both Portmore and UWI played a disciplined first half, with most of the action being centred in the middle of the pitch, as their forward thrusts mostly broke down in the final third.

They played a more exciting second half, with both teams creating good scoring opportunities, with Portmore being reduced to 10 men after Damono Solomon was ejected in the 68th minute.

Portmore took the lead when a ball was played from midfield over the top by Damion Williams, for East to latch onto, and he was brought down inside the area.

Minutes before the end, UWI were given a grand opportunity to equalize, after the ball was handled inside the area, but the resultant penalty was kicked straight to goalkeeper Benjamin Williams by Fabion McCarthy.