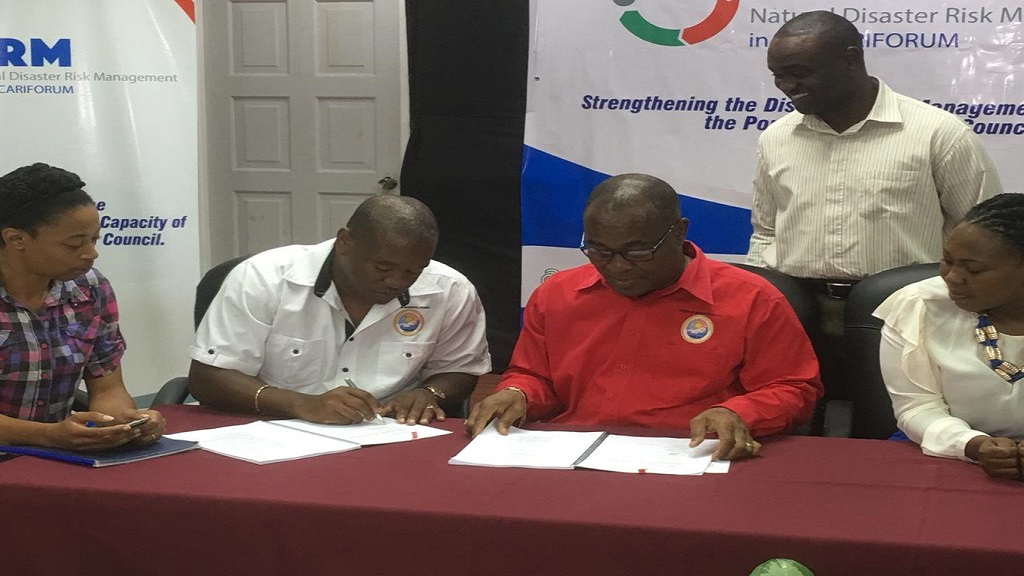 The dormitory community of Portmore in St Catherine which is said to be vulnerable to natural disasters and other hazards, will soon benefit from a disaster risk management plan courtesy of a €400,000 ((J$60 million) grant being provided by the Caribbean Development Bank (CDB) and the Jamaican Government.

This was revealed by the Mayor of Portmore, Leon Thomas, during a recent contract signing at the Portmore Municipal Corporation’s (PMC), Portmore Pines offices.

With its coastal areas like Edgewater, Bridgeport, Bridge View and the Port Henderson Road which is more popularly known as ‘Back Road’ being vulnerable to storm surges, and with the risk from an earthquake likely to be exacerbated, the PMC recently signed a contract with IH Cantabria, for consultancy services aimed at minimising said risks.

Thomas explained that the grant will allow researchers from IH Cantabria, a division of the University of Cantabria in Spain, access to analyze Portmore, create a disaster risk management plan, and to formulate a natural hazard risk profile for the area. The consultancy is expected to last 18 months.

"It will be an evidence-based assessment to get international agencies and institutions to see how vulnerable we (Portmore) are. At the end of the 18-month study, the results will be handed over, and then eventually published online," said Georgia Crawford-Williams, a sociological consultant and corporate trainer representing IH Cantabria.

Mayor Thomas who signed on behalf of the municipality, said it was timely, especially as the effects of climate change are being felt locally with more intense hurricanes and extensive flooding. He also noted the risks posed by earthquakes.

According to the mayor, the researchers will use specialised equipment to provide technical assistance to revise the Portmore multi-hazard risk profile and improve its disaster management risk plan.

"This project will build community disaster resilience, and aid the council to have evidence-based decisions in disaster risk management.  It will strengthen community preparedness and response capacity to manage natural hazard events," Thomas said.

The PMC will serve as a 'guinea pig' of sorts as the results of the study could be replicated in other municipalities and regions.

"The lessons learnt here will be taken to other municipalities," said Patrick Watson, senior director of hazard mitigation and risk management in the Ministry of Local Government.

Of note is that the Government received the financing from the CDB’s Special Funds Resources under the African, Caribbean and Pacific European Union (ACP-EU) CDB Natural Risk Management in the CARIFORUM Countries programme.

Disaster co-ordinator at the PMC, Phillipa Ricketts-Edmund who conceptualised the proposal which was submitted to the CDB for consideration, said the development is significant as many countries target such funding which is difficult to come by.

"I just personally contacted somebody at the CDB to express a need to improve on the disaster management framework in Portmore and we had an initial meeting which mushroomed into a more formal request to do a concept note, which then led to a proposal.

“This will improve the capacity of the Portmore Council in terms of disaster management," Mrs. Ricketts-Edmund said.

"We need evidence-based information so if in the future we want to request more tangible help we can substantiate that claim. It is often said that Portmore is vulnerable, but to date, there's still no data to show just how vulnerable we are.

“This is a way to provide documentation so that we can prove to international donors just how vulnerable we are and as such, we can request more tangible assistance," Mrs. Ricketts-Edmund noted.

In terms of building the capacity of the PMC, the disaster coordinator explained that a data base that will be accessible by members of the public will be created online. She said persons visiting the website will be able to familiarise themselves with things like storm surge maps, flood maps, or seismic maps that speak to earthquakes.

“So if they are going to do extensions to their buildings they can now submit plans which would include the necessary mitigation measures based on what they are seeing,” Ricketts-Edmund pointed out.

She said at least five members of staff of the PMC will be trained in Geographical Information System (GIS) to ensure that when the IH Cantabria team leaves, the database will be fully maintained by the PMC.

She also said a public education campaign will be a major component of the project. Disaster plans will be created for ten communities based on divisional boundaries.

The Environmental Hydraulics Institute 'IH Cantabria' is a joint research centre that carries out research, knowledge transfer and training of specialists in the fields of fresh and saltwater.