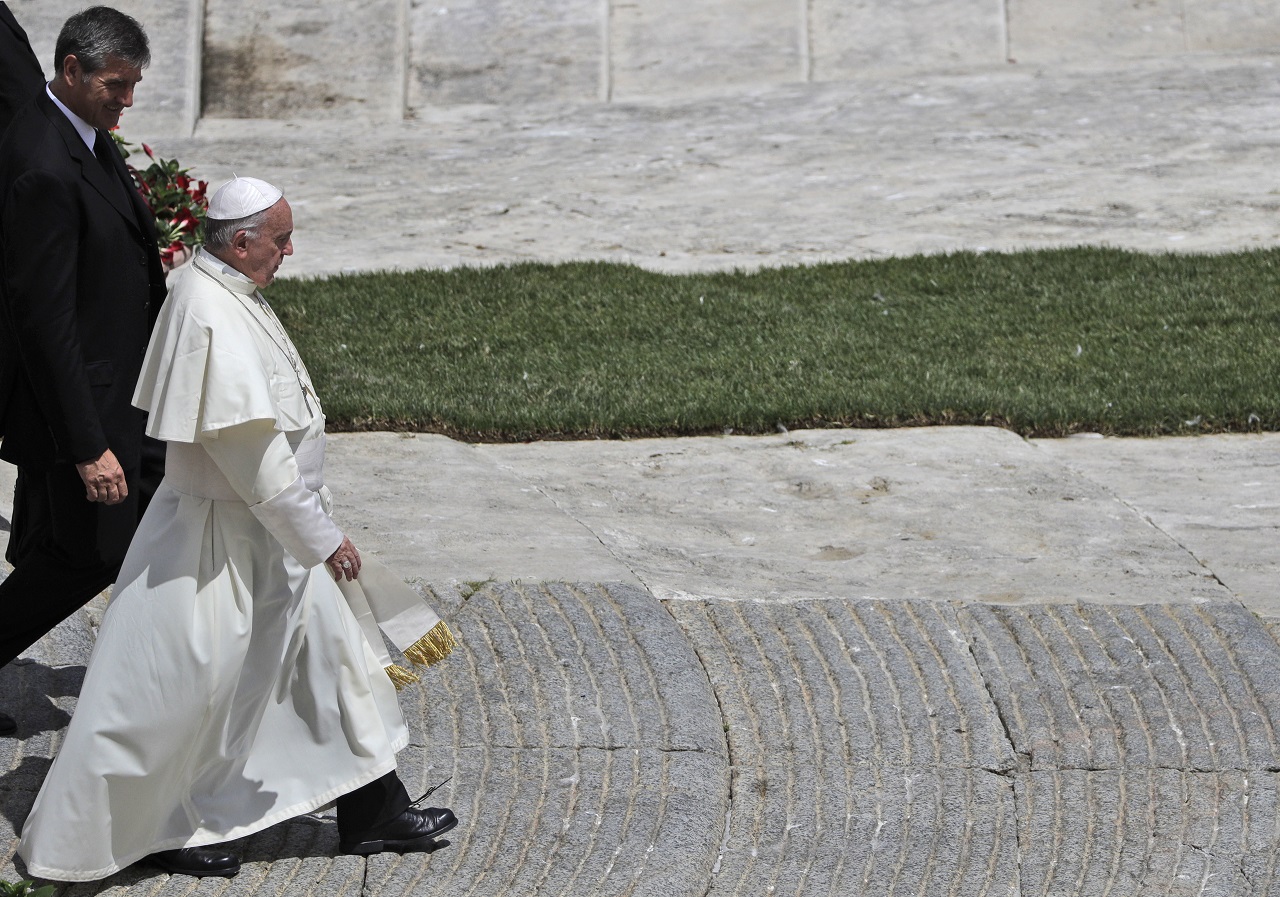 Pope Francis leaves with his butler Sandro Mariotti, at the end of a special mass for Roman holiday of St. Peter and St. Paul in St. Peter's square at the Vatican, Thursday, June 29, 2017.

Pope Francis on Saturday pushed out the Vatican's conservative doctrine chief, tapping a deputy instead to lead the powerful congregation that handles sex abuse cases and guarantees Catholic orthodoxy around the world.

Francis and German Cardinal Gerhard Mueller had clashed, most recently over the pope's cautious opening to letting civilly remarried Catholics to receive Communion. Mueller had insisted they cannot, given church teaching on the indissolubility of marriage.

In a short statement, the Vatican said Francis had thanked Mueller for his service. Mueller's five-year term ends this weekend and he turns 70 in December. The normal retirement age for bishops is 75.

Francis could have kept him on, but declined to do so. The Jesuit pope instead tapped the No. 2 in the Congregation for the Doctrine of the Faith, Jesuit Monsignor Luis Ladaria Ferrer, to succeed Mueller.

Francis' refusal to renew Mueller's mandate marked his latest move to remake the Holy See's hierarchy more in his mercy-over-morals likeness, following earlier moves to replace hard-line conservatives in the Vatican high court and office responsible for the world's clergy.

It was also the second major shake-up this week, after Francis granted another Vatican hardliner, Cardinal George Pell, a leave of absence to return to his native Australia to face trial on sexual assault charges.

Mueller and Pell were two most powerful cardinals in the Vatican, after the Vatican secretary of state, Cardinal Pietro Parolin. Their absences, coupled with Francis' earlier demotion of Cardinal Raymond Burke as the Vatican's chief justice, will likely create a power vacuum for the conservative wing in the Holy See hierarchy.

Emeritus Pope Benedict XVI had tapped Mueller, his fellow German countryman, to lead the congregation in 2012. Benedict had taken a hard line against clerical sex abuse during his time as prefect of the congregation himself, and later as pope, defrocking hundreds of priests accused of raping and molesting children.

It was also Benedict who insisted that bishops around the world send all cases of credibly accused priests to the congregation for processing, since bishops had for decades moved pedophiles around from parish to parish rather than sanction or report them to police.

During Mueller's tenure, the sex abuse caseload piled up as more and more victims came forward from Latin America, Europe and beyond. Last year, Francis confirmed there was a 2,000-case backlog, and he set about naming new officials in the congregation's discipline section to process the overload.

Mueller's handling of the abuse portfolio came under fire from Marie Collins, an Irish survivor of abuse. Collins resigned from Francis' sex abuse advisory commission in March in frustration of what she said was the congregation's "unacceptable" resistance to accepting the commission's advice on how to better respond to victims.

But the greater clash between Mueller and the pope concerned Francis' divisive 2016 document on family life "The Joy of Love," in which he used strategically placed footnotes to offer a cautious opening to letting divorced and civilly remarried Catholics receive Communion.

Church teaching holds that unless these Catholics receive an annulment, or a church decree that their first marriage was invalid, they are committing adultery and cannot receive Communion unless they abstain from sex. For a variety of reasons, such annulments often cannot be obtained.

Four conservative cardinals have led the charge attacking the pope's document as vague and confusing and publicly requesting Francis clarify it. Mueller didn't join their campaign, and in fact defended the document by insisting it in no way allows Communion for these Catholics because church tradition simply could not permit it.

But he has made clear he disagrees with Francis' suggestion that any such decisions could be arrived at in the realm of personal discernment.

"A privatization of the sacramental economy would certainly not be Catholic," he argued in a 2016 speech.

Ladaria, a Spanish Jesuit, was appointed No. 2 in the congregation in 2008 by Benedict. Francis last year appointed him to lead a commission to study whether women could be deacons in the church.

Knights of Malta head resigns amid spat with Pope Francis