Pope Francis under pressure to confront sex abuse in Chile 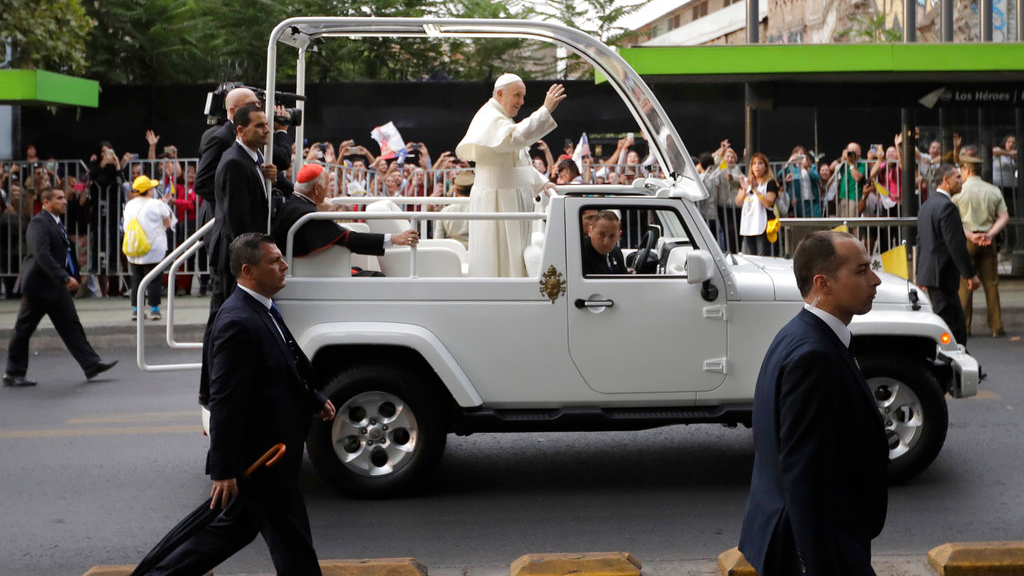 Pope Francis waves to followers on his way to the Apostolic Nunciature in Santiago, Chile, Monday, Jan. 15, 2018. (AP Photo/Natacha Pisarenko)

Pope Francis will be under pressure Tuesday to confront a priest sex abuse scandal during his first full day in Chile, an Andean nation where the majority identifies as Roman Catholic but strong currents of skepticism and even contempt for the church are increasingly present.

Many Chileans are still furious over his 2015 decision to appoint a bishop close to the Rev. Fernando Karadima, a priest found guilty by the Vatican in 2011 of abusing dozens of minors over decades.

Bishop Juan Barros of the southern city of Osorno has always denied he knew what Karadima was doing when he was the priest's protege, but many Chileans have a hard time believing that.

"Sex abuse is Pope Francis' weakest spot in terms of his credibility," said Massimo Faggioli, a Vatican expert and theology professor at Villanova University in Philadelphia. "It is surprising that the pope and his entourage don't understand that they need to be more forthcoming on this issue."

The Karadima scandal and a long cover-up has caused a crisis for the church in Chile, with a recent Latinbarometro survey saying the case was responsible for a significant drop in the number of Chileans who call themselves Catholic as well as a fall in confidence in the church as an institution.

That distrust extends to Francis, who is making his first visit as pope to this country of 17 million people. The Argentine pope is nearly a native son, having studied in Chile during his Jesuit novitiate and he knows the country well, but Chileans give him the lowest approval rating among the 18 Latin American nations in the survey.

"People are leaving the church because they don't find a protective space there," said Juan Carlos Claret, spokesman for a group of church members in Osorno that has opposed Barros' appointment as bishop. "The pastors are eating the flock."

People angry over Barros planned a protest for Tuesday, when Francis is scheduled to celebrate Mass, meet with President Michelle Bachelet and visit a female prison.

But other groups also called demonstrations against the pontiff.

Victor Hugo Robles, an activist in Chile's lesbian and gay community, said the Vatican tries to paint an image of the pope as being close to the people, particularly those with the most needs.

"We are the ones who need help," said Robles. "Gay people, people living with AIDS. When it comes to those things, the church has an attitude of intolerance, of disgust."

Felipe Morales, from a group called the Workers' Socialist Front, said many were unhappy with the pope and the church's historical influence in Chile. They planned to protest outside while Francis celebrated Mass.

"The role of the church has been nefarious," said Morales. "Sex abuse cases have been covered up and people are unhappy with many other issues."

To be sure, many will be excited to see the pope. Thousands lined the streets of Santiago to get a glimpse of Francis after he arrived Monday night, though the crowds were notably thin compared to previous visits to other Latin American capitals.

"It was amazing to see him," said Luis Salazar, a young boy who came out with his family to see Francis pass by in his pope mobile.

The pope will try to inject new energy into the church during his visit, which starts off Tuesday with a series of protocol visits for church and state.

He also plans sessions with migrants, members of Chile's Mapuche indigenous group and victims of the 1973-1990 military dictatorship. It remains to be seen if he will meet with sex abuse survivors. A meeting wasn't on the agenda, but such encounters never are.