Jamaica's Prime Minister Andrew Holness (left) addresses journalists at a press conference at the Office of the Prime Minister on Wednesday morning, while US Secretary of State Mike Pompeo looks on. (Photos: Marlon Reid)

Jamaica's Prime Minister Andrew Holness and United States Secretary of State Mike Pompeo say they have agreed on a raft of initiatives including measures to stem the illegal gun flow into the island.

Speaking at a press conference following bilateral discussions at the Office of the Prime Minister on Wednesday morning, Holness said he and Pompeo "found common understanding on the urgent need to scale up our security cooperation".

"The main focus will be on bolstering Jamaica’s capacity to counter transnational organised crime, secure our borders and ports, and interrupt the flow of illicit weapons into the country," Holness said.

Jamaica's homicide rate is at an alarming level, with murders being recorded on the island at nearly eight times the global average. In the majority of cases, guns are the weapon of choice. Neither the weapons nor the ammunition that are used to kill are manufactured in Jamaica, yet the island is awash with arms.

"I cannot overstate the urgency with which we need to address these security matters... Mr Secretary, we are therefore greatly heartened to have your pledge of support as we move to rigorously implement Plan Secure Jamaica," Holness said at Wednesday's press conference.

Holness said they also held discussions about strengthening the economic partnership between the nations. 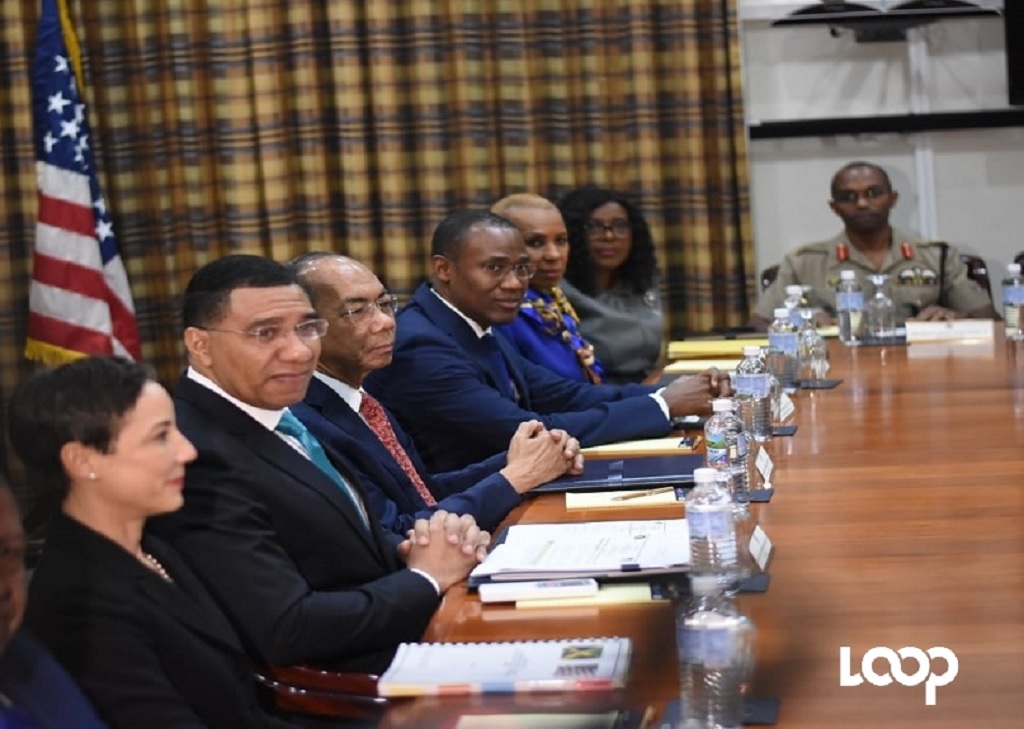 "At the wider level, securing Jamaica also requires sustained intervention on the economic and social front...
I therefore, reaffirmed Jamaica’s keen interest in and plans to build upon the economic partnership between the United States and Jamaica. We will bolster cooperation in the area of energy security, increased trade, and importantly, we re-stated our desire to see greater US investment in Jamaica and across the region," Holness said.

The Jamaican prime minister also said he and Pompeo "shared views on the challenges being confronted in the wider region" and "concurred on the importance of these issues being resolved in a peaceful but timely manner".

Last year, Jamaica sided with 18 other members of the Organisation of American States (OAS) in a vote that does not recognise the legitimacy of the Maduro government in Venezuela, a controversial issue that has divided Caricom.

The Trump administration considers Maduro's government a dictatorship and says he was re-elected in an illegitimate election. The US has sanctioned scores of top Venezuelan officials and has blocked US banks from doing business with Venezuela, putting a financial stranglehold on the cash-strapped country.

In the meantime, at Wednesday's press conference, Pompeo said the discussions are expected to strengthen existing bonds between Jamaica and the United States.

"As the prime minister and foreign minister discussed today, we are natural allies, natural friends. We have a close and historic relationship with Jamaica, that is built on a whole lot more than just proximity," he said, adding "More importantly, it is clear every day, in the bonds of trade, tourism and the flourishing communities of Jamaican-Americans in my home country... today in our meeting, the prime minister and I strengthened our friendship and set the table for greater engagement in that conversation."