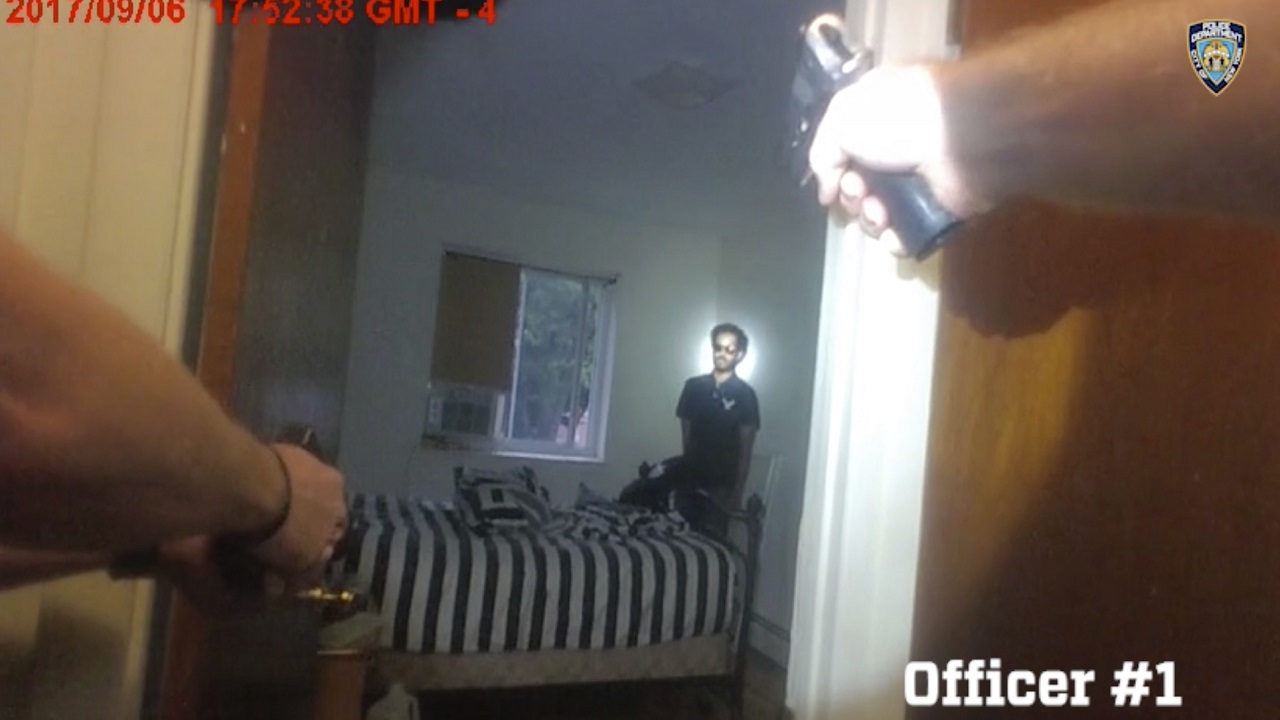 In this image taken from a New York Police Department officer's body camera video, officers aim their weapons towards Miguel Richards as Richards kneels on his bed in his New York apartment while holding a knife. The officers shot and killed Richards after he pointed a gun at them that turned out to be fake. Release of the body cam video marked the first fatal police encounter captured on the devices since officers started wearing them this year. (NYPD via AP)

New York police released bodycam footage Thursday showing the tense buildup to the fatal shooting of a Jamaican male student residing in the US by lawmen inside his apartment in the Bronx area of New York last week.

The footage shows 31-year-old Miguel Richards holding a knife and what turned out to be a fake gun, though the cameras didn't capture a clear picture of the moment when officers opened fire.

It was the first fatal police encounter recorded on the devices since officers began wearing them this year.

Police were called to the Bronx home of Richards on September 6 after his landlord reported he hadn't seen him for days.

The videos, shot by cameras worn by four officers, show how police pleaded with Richards for several minutes to drop his weapons and show his hands.

Officer Mark Flemming shines a flashlight into Richards' bedroom as the information technology student, wearing dark glasses and holding a knife, stands motionless behind his bed. He never speaks.

A friend called to the apartment by the landlord frantically begs Richards to drop the knife and put his hands up.

About 15 minutes in, the officers notice Richards has a gun behind his back.

What happens next is partly obscured by the officers' arms and the walls. Another officer, Jesus Ramos, quickly enters the bedroom with a stun gun. There is a loud bang — police said from the stun gun discharging — a thump, then 16 gunshots.

Police said the officers fired when Richards pointed a fake gun with a laser pointer at the officers. A red dot from a laser pointer can be seen, but it isn't clear whether that comes from the toy pistol or the sight on the stun gun. The officers appear to recoil just before firing. Watch the video below. WARNING: Footage contains strong language and graphic images. Viewer discretion is advised.

"This footage raises more questions than it answers," said Tino Luongo, a lead attorney at The Legal Aid Society. She said Richards seemed to pose no immediate threat to the officers. "Moreover, these officers demonstrate zero knowledge in identifying and handling a situation involving an individual who may be struggling with mental illness."

She likened the case to the death of Deborah Danner, a 66-year-old, mentally ill woman shot to death by a police officer during a similar well-being check last October.

"It's also troubling that in spite of the fact that about 5,000 officers have received training on interacting with mentally ill people, the NYPD has yet to figure out a way to get the trained officers to the scene or simply do not utilize crisis intervention teams as other cities use."

"That's a lot of warnings by both uniformed officers and a friend at the scene," Gomez said.

Richards’ father, Belvett, 61, identified the deceased as a university exchange student from Jamaica, who was studying information technology. He said they last spoke about a month ago, and everything seemed okay with his son.

Belvett has said he believed officers killed his son in cold blood.

"He did not deserve to die this way," he told the Daily News of New York.

The footage was released publicly over the objection of Bronx District Attorney Darcel Clark, who said she supported the need for transparency but wanted the video withheld until she had completed an investigation into the shooting.

In a note to officers, Police Commissioner James O'Neill said the department was releasing the footage because it was committed to being transparent.

"In the vast majority of these cases, we believe that body-worn camera video will confirm the tremendous restraint exhibited by our officers," he wrote.

Officers at the nation's largest department began using body-worn cameras in April as part of a federal judge's order following a ruling that the department discriminated against minorities.

Mayor Bill de Blasio has said he wants all 23,000 of its patrol officers outfitted with cameras by 2019. So far, 670 officers have them.

There are no set rules on when to release footage.

The NYPD has said it would evaluate each instance on a case-by-case basis. That includes decisions about how much footage to release, whether to edit excerpts or whether to make it public at all.

In some cities, the decision is made by mayors or prosecutors. In San Diego, the district attorney has said videos would not be released until her office has completed a review and only sections relevant to the investigation would be released. In Washington, D.C., the mayor's office decides with input from police and prosecutors.

In Chicago, footage must be released within 60 days. City Hall had fought the release of video showing a white officer shooting black teenager Laquan McDonald 16 times in October 2014.

Chuck Wexler, executive director of the Police Executive Research Forum, which wrote guidelines on body-worn cameras for the Justice Department, said he recommended a broad release policy and suggested that departments that don't want to release video not buy the cameras.

"The public expectation — they want it now — is vastly different from that of prosecutors or those who focus on the administrative aspect of this," he said. "And the public's right to know is winning out."

Cops roll out use of body cameras