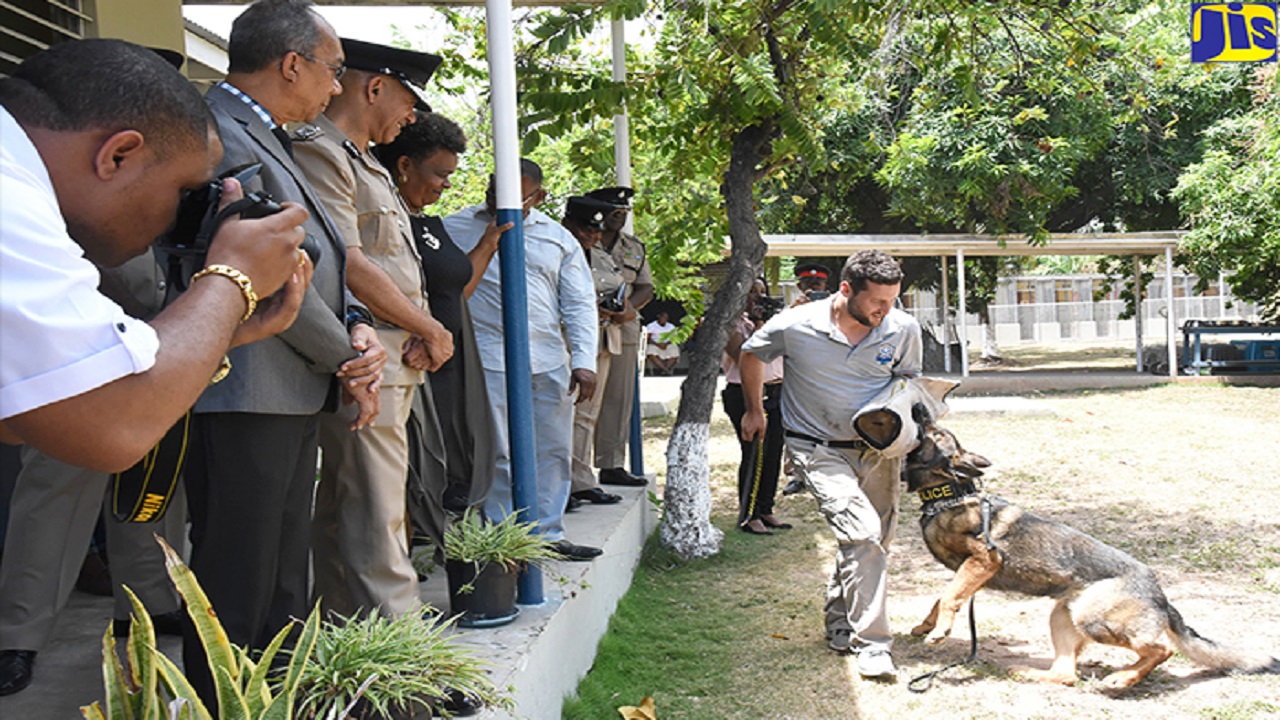 It is said that a dog is a man’s best friend, and for the police they are also worthy partners in the fight against crime.

Dogs have become a critical part of the Jamaica Constabulary Force (JCF) crime management strategy, particularly in the detection of illegal narcotics, firearms, and ammunition.

In recognition of the important role these animals play in this and other areas, the Government has moved to boost the capacity of the JCF’s Canine Division, having acquired 16 additional dogs between November 2017 and April 2018. This brings the complement of highly trained dogs to 61.

Head of the division, Superintendent of Police, Dalton Wright, boasts that the dogs, along with their human counterparts, “have been doing a tremendous job”.

“We have found (many) firearms and illegal drugs (such as cocaine and ganja), and we have been doing (various activities) for safety purposes,” he told JIS News.

He explains that the division, which comprises 50 per cent dogs and the other half humans, also specialises in carrying out search and rescue operations, as well as a cadaver service, which involves locating human remains.

“Our cadaver dogs have been working marvelously, in the sense that they have been finding a lot of human remains that are connected to various crimes. So they help in the crime-fighting machinery that we have in Jamaica, and will continue to do so,” he assures.

He notes that operations are normally carried out at both international airports in Kingston and St James; the Central Sorting Office; Kingston Wharf; and Kingston Freeport Terminal Limited.

“We also do commercial checks at cruise ship piers, (and offer) very important person (VIP) protective services,” he says, adding that the dogs of the Labrador, German Shepherd, Cocker Spaniel and Golden Retriever breeds are also trained to locate explosives.

“The persons were arrested for breaches of the Dangerous Drugs Act, and the cases were brought before the court and disposed of,” Superintendent Whyte indicated.

In 2015, the division carried out 48 operations that led to the discovery of 117 weapons and several rounds of ammunition. These included A1 rifles; one Smith and Wesson handgun; fourteen 5.56 cartridges; three .38 cartridges; 53 nine millimetre cartridges, and two 9 millimetre magazines.

In terms of search and rescue operations, in 2016, the canines were instrumental in recovering the bodies of two American missionaries in a shallow grave. The men were allegedly murdered in St Mary.

“The drugs, firearm and ammunition found were sent to the Government Forensic Laboratory for testing… (and) the contraband was destroyed in accordance with force olicy,” Superintendent Whyte explains.

Newly appointed Minister of National Security, Dr Horace Chang, said he is impressed with the work of the Canine Division and pledged further support.

“It is a well-run unit. I think the officers in charge are capable (and) competent,” he told journalists during a tour of the facility at its Deanery Road location in Kingston on April 20.

The minister said there are plans to import additional dogs to ensure there is an adequate number to carry out all the division’s operations.

“We will have to expand the number… We need a squad of about 82 trained dogs, organised between narcotics and firearm detection skills,” he says.

He notes that this is necessary, given that the techniques being used by criminals involved in arms and drugs are getting more sophisticated.

Seven of the recently-acquired dogs were sourced through dog-training company based in the United States of America (US), Stellar K-9.

Stellar K-9 trainer, Steven Thompson, told JIS News that the dogs, which were brought in from Germany, Slovakia and the Czech Republic, were trained in detecting firearms, ammunition and spent-shell casings.

Other dogs housed at the division were sourced from Colombia and the US.

“They’ll be able to go into a homicide scene or a scene-of-crime and detect spent shells from a shooting (for example) that the detectives weren’t able to find,” he says.

He notes that the company will be bringing in two more dogs that will be trained in criminal apprehension, human tracking and firearm detection.

During the tour, Thompson and his partner gave a comprehensive demonstration of the expertise of what he termed “dual-purpose” dogs.

“We demonstrated patrol work, which is criminal apprehension and complete obedience. Each dog needs to be trained on full obedience in order to get to the next level of training,”

The dog kennels at the division were refurbished and expanded at a cost of $11.7 million last year. The expansion will increase the capacity of kennels from 70 to 105, and is to be completed this year.

Minister Chang was joined on the tour by Permanent Secretary in the Ministry, Dianne McIntosh; Commissioner of Police, Major General Antony Anderson, and other JCF personnel.

'Mango thief' hospitalised after falling out of tree, attacked by dogs