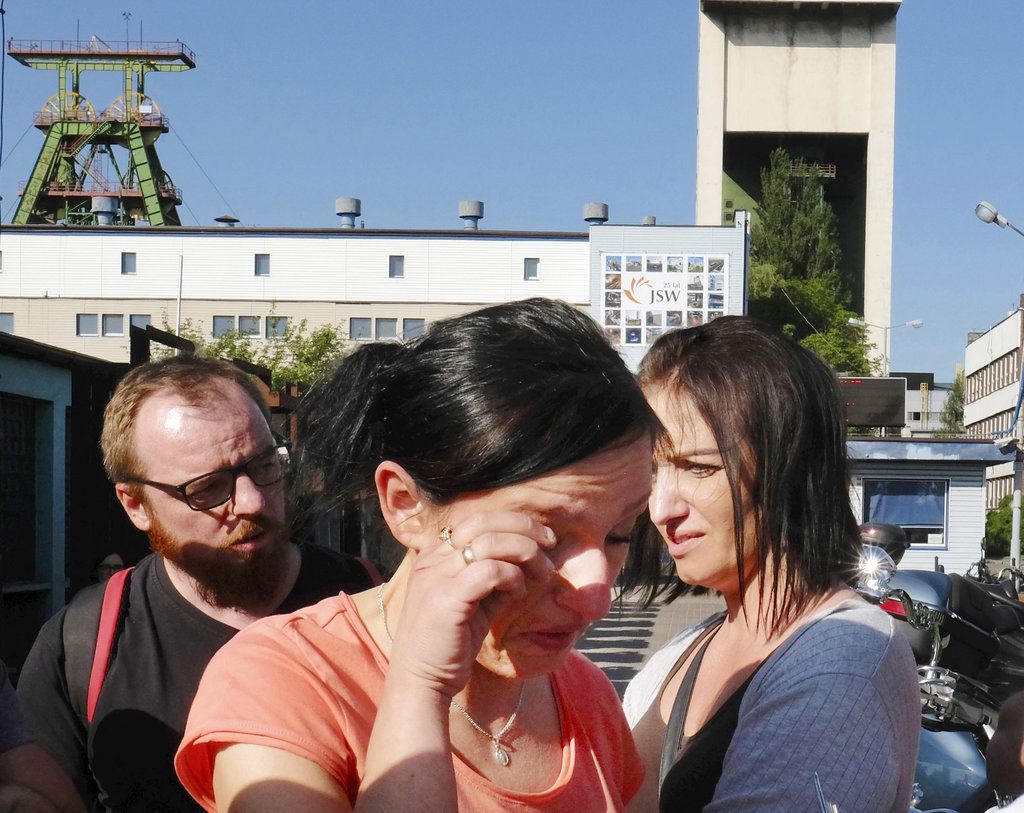 A woman crying in front of the Zofiowka coal mine in Jastrzebie-Zdroj in southern Poland. (AP Photo/Rafal Klimkiewicz)

Polish rescue workers on Sunday found the body of 38-year-old coal miner, the first fatality after an earthquake hit a coal mine in southern Poland.

Three other miners have been missing some 900 meters (2,950 feet) below ground since Saturday morning at the mine in the town of Jastrzebie-Zdroj, close to Poland's border with the Czech Republic. One of them has been located but was not rescued yet, a mining official said Sunday.

The head of the Jastrzebie Coal Company, Daniel Ozon, said the latest miner pulled out of the Zofiowka mine was pronounced dead after he had been trapped under some metal. He had worked for the company for 10 years.

More than 200 workers were involved in the rescue operation. Ozon said emergency workers were pumping air into the affected area to lower the level of methane gas before they can safely move ahead.

After the quake hit, four miners were rescued quickly but seven others went missing. Two of the missing were later found alive and have been hospitalized.

Prime Minister Mateusz Morawiecki, who came to Jastrzebie Zdroj on Saturday night, visited the hospitalized miners and met with their families. President Andrzej Duda was on his way to the town.

Authorities have launched an investigation into the accident.

Poland's State Mining Authority said the temblor had a magnitude of 3.4, while the European Mediterranean Seismological Centre pegged it at 4.3. TVN24 said the quake was also felt on the surface and shook some houses.

Coal mining is a major industry in Poland. Coal remains the main source of energy and heating in the country but Poland is taking some steps to shift toward renewable, cleaner sources of energy. The Main Statistical Office said some 65.8 million metric tons (58.7 million tonnes) of coal were extracted last year in Poland, some 4.8 million tons less than in 2016.

Still many of Poland's mines are dangerous, with methane gas that has led to a number of deadly explosions and cave-ins. So far this year, five miners including Sunday's casualty have been killed at different mines, according to the State Mining Authority.

In 2016, eight miners were killed in a cave-in at the Rudna mine in Polkowice and methane explosions killed five miners at the Myslowice-Wesola mine in 2014.