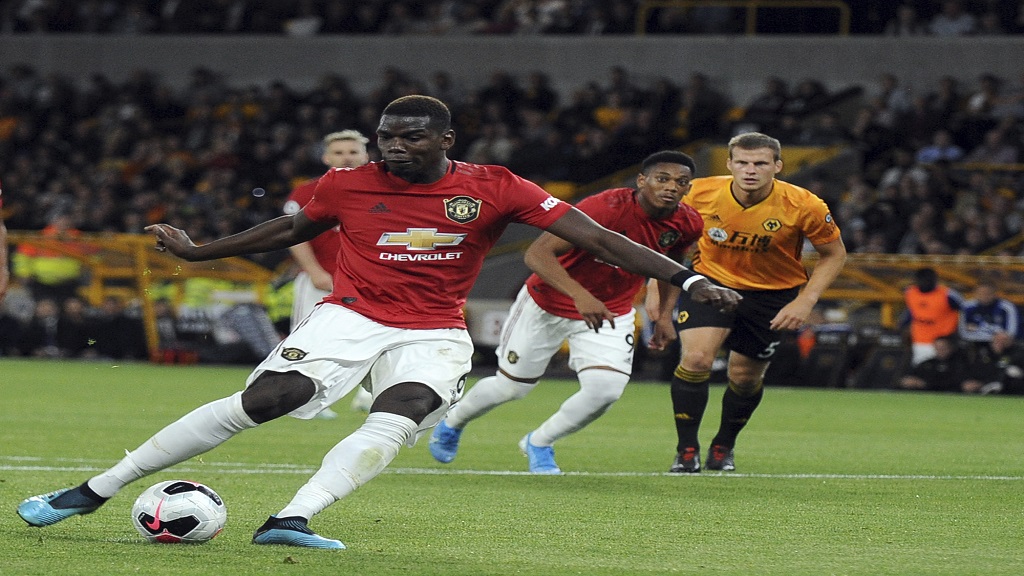 Paul Pogba pulled his jersey over his face when the final whistle sounded, his latest spot-kick failure costing Manchester United two points and casting doubt over the wisdom of the team rotating its penalty-takers.

The France midfielder saw his 68th-minute attempt saved — his fourth penalty miss in the past year — as United had to settle for 1-1 at Wolverhampton Wanderers in the English Premier League on Monday.

Pogba won the penalty after being tripped by Wolves defender Conor Coady and opted to take the kick himself after talking with Marcus Rashford, who converted a penalty in United's 4-0 win over Chelsea on the opening weekend of the season.

"The two of them are designated penalty-takers," United manager Ole Gunnar Solskjaer said. "It's up to them, there and then.

"Marcus scored last week but Paul was also confident. I like players with confidence."

Rashford said Pogba "wanted to take it, it's that simple."

"Anyone can miss a penalty," Rashford said. "He has scored so many penalties and it is normal to miss one. I took one last week, so for me it's no problem that he took it. It's unfortunate he didn't score but that's football."

Anthony Martial put United into the lead at Molineux after running onto Rashford's pass and shooting first time with his left foot high into the net in the 27th.

United handed Martial the No. 9 jersey for this season, with Solskjaer demanding more goals from the winger he has converted into a striker. It is two goals in two games for the Frenchman, who also netted from close range against Chelsea.

Wolves was overrun in the first half, but improved in the second half — mainly after the halftime introduction of pacy winger Adama Traore — and equalized through a superb strike from Ruben Neves.

The midfielder received the ball on the edge of the area from Joao Moutinho, took a touch, and curled a shot in off the crossbar. The video assistant referee checked the goal for offside against Moutinho but the goal stood.

"First half was a mature performance. Second half was a bit sloppy," Solskjaer said. "We are improving. We are a young team who will learn. We learned on the pitch today."