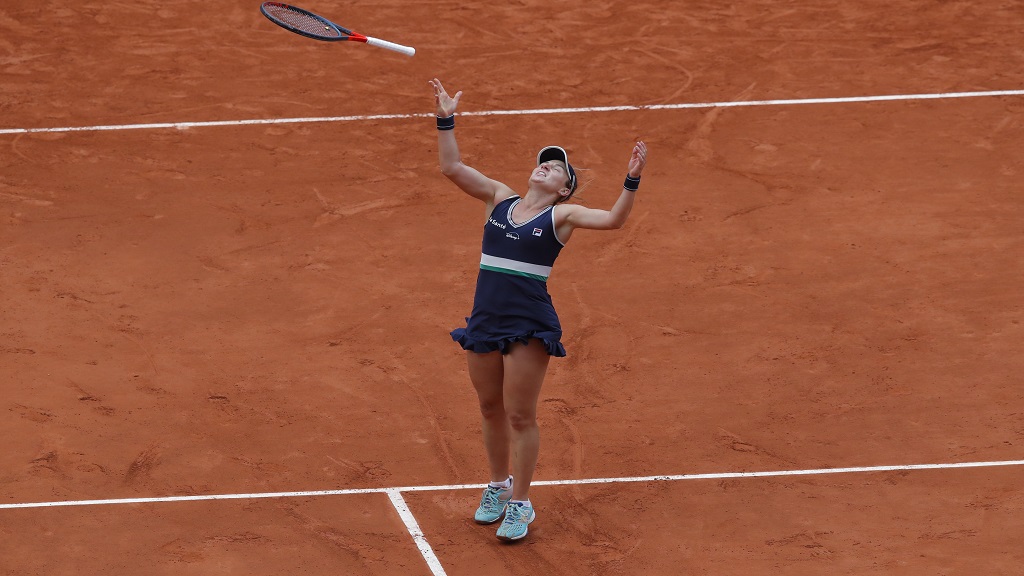 Argentina's Nadia Podoroska throws her racket in the air as she celebrates winning the quarterfinal match of the French Open tennis tournament against Ukraine's Elina Svitolina in two sets, 6-2, 6-4, at the Roland Garros stadium in Paris, France, Tuesday, Oct. 6, 2020. (AP Photo/Michel Euler).

Nadia Podoroska caused an almighty upset to beat third seed Elina Svitolina and make history by booking a spot in the French Open semi-finals thanks to a 6-2, 6-4 triumph.

The Argentine had never played a grand slam match prior to this tournament and was facing a top-20 opponent – the highest-ranked player left in the top half of the draw – for the first time in her career.

But in an immense debut on Court Philippe Chatrier, Podoroska – ranked 131st in the world – outfought Svitolina, who held serve only once against her unfancied opponent.

Podoroska is consequently the first women's qualifier to ever reach the French Open semis and her brave display is rewarded in the shape of a last-four dance with either Iga Swiatek or Martina Trevisan.

After the match, she said: "Well it's a little bit difficult speaking now after the match my English is not so good, thank you so much everybody for your support – I'm very,very happy."

Podoroska's nerves perhaps betrayed her when dropping serve in the first game but from there the Argentine's aggression on the forehand, which helped towards 17 first-set winners, coupled with Svitolina's serving woes, saw her reel off five straight games.

Even a rare blip was followed by a break to love to clinch the opening set and it was not until Svitolina's first service game of the second that the Ukrainian was able to hold.

There were six consecutive breaks from that point as Svitolina failed to consolidate against a gutsy opponent, who crucially held for a 5-4 lead.

Svitolina saved two match points, the second at the end of a mammoth 27-shot rally, but the third time proved a charm for a euphoric Podoroska.

Take nothing away from Podoroska, who was fully deserving of her historic win, but Svitolina paid the price for poor serving. She won only 33 per cent of points on first serve and 40 on second, affording her opponent far too many opportunities. Podoroska hit 30 unforced errors, yet her willingness to take on shots also produced 30 winners.

French Open 2020: Kenin and Kvitova through to quarter-finals