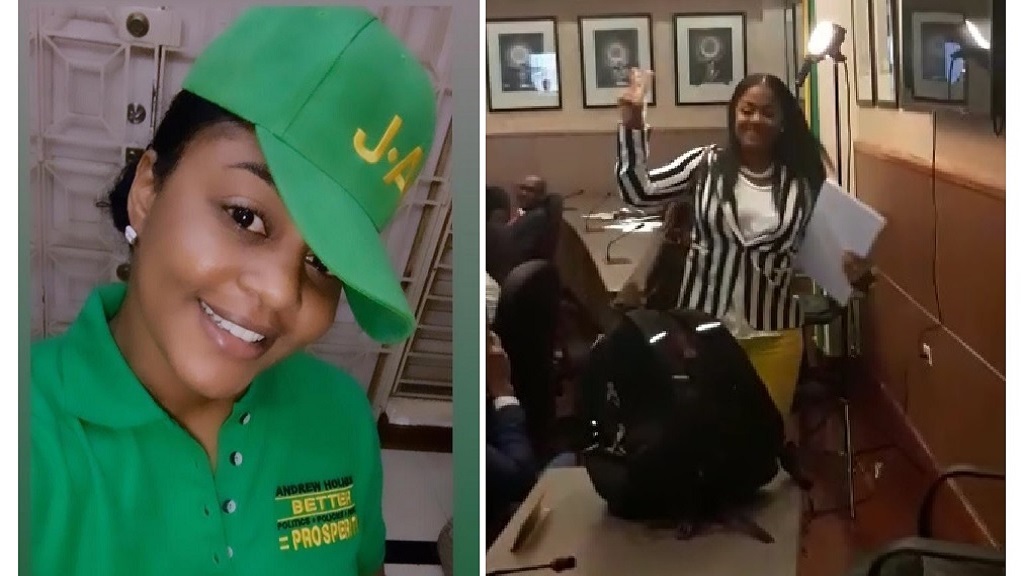 Combination of photos showing councillor Kari Douglas after crossing the floor of the KSAMC to become a member of the ruling Jamaica Labour Party. At left she is pictured decked out in green, the colour of the JLP, while at right she flashes the JLP's 'V' sign immediately after crossing the aisle.

The People's National Party (PNP) has extended well wishes to Kari Douglas, its longstanding councillor for the Trafalgar division of the Kingston and St Andrew Municipal Corporation (KSAMC), on her decision Tuesday to switch allegiance and join the ranks of the Jamaica Labour Party (JLP).

The PNP, in a tersely worded statement, said the party has taken note of the decision by Douglas to cross the floor.

“The party is already well advanced in confirming its new candidate for the Trafalgar division and is committed to retaining the seat in the next Local Government elections.

“The party wishes Ms Douglas well as she embarks on a new phase of her political journey,” the statement said.

Meanwhile, the JLP said Tuesday that it welcomed Douglas’ decision to join the governing party.

JLP Chairman, Robert Montague, in a statement, said the party was encouraged when citizens of Jamaica are attracted by the JLP's vision of working hard towards prosperity for all.

Montague described Douglas as a talented Jamaican who has much to offer the JLP and the country. He said she was the first of a cohort which has indicated a willingness to join the ranks of the JLP.

For his part, JLP General Secretary Dr Horace Chang, while welcoming Douglas, said it was instructive that in her statement, she noted that many of the younger cohort of the electorate are persuaded to assist Prime Minister Andrew Holness and the JLP in the vision to develop and execute policies that are beneficial to the people of Jamaica.

“In spite of challenges and constant scrutiny, politics remains the highest form of public service and the JLP respects and welcomes young Jamaicans who wish to work within our party to provide public service to Jamaica,” Chang stated.

In a lengthy statement confirming her decision to leave the PNP, Douglas said that for some time she has been “deeply concerned that my former party has become a political organisation which is primarily focused on winning elections at any cost, as opposed to pursuing an unswerving commitment to national development and in that process listening to the people and creating policies to meet their needs”.

“My former political party has also for sometime not been a space where creative ideas, especially the thoughts of young people, are encouraged and treated seriously. I have decided that enough is enough,” Douglas added.

The daughter of the late former Cabinet Minister Easton Douglas said she was concerned that given the “tribal nature” of the country’s politics and her political antecedence, her decision to leave the PNP could cause her former comrades to become vindictive. As such, she said the decision was not an easy one.

She went on to heap praise on the leadership style of Prime Minister Andrew Holness.

“I must indicate that given the dynamic leadership with a positive difference that Prime Minister Holness has been able to offer the country and the JLP over the past few years, I am certain and in absolutely no doubt that I have made the right decision,” Douglas said.

Phillips, Bunting embrace in show of unity after bitter contest