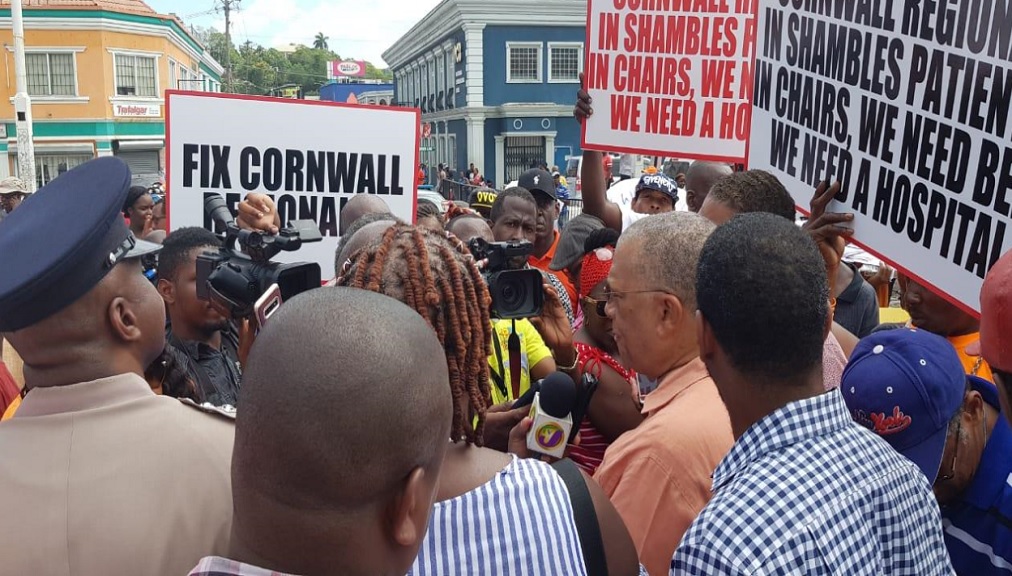 The People’s National Party (PNP) will be hosting a national stakeholders’ meeting on crime at the Jamaica Conference Centre, downtown Kingston on July 30.

The announcement was made on Thursday by Opposition Leader and PNP President, Dr Peter Phillips, while speaking with journalists during the party’s second anti-corruption vigil “against corruption in Government” in Sam Sharpe Square, Montego Bay, St James.

Phillips has increasingly expressed his disappointment over, what he has described as, the failure of the Andrew Holness-led administration to convene such a meeting which was reportedly agreed to at the Vale Royal talks in January.

Phillips’ latest call for such a meeting was made on Tuesday in the House of Representatives during the debate on a resolution to extend the state of emergency (SOE) in the St Andrew South police division until October 5.

Phillips had also met with church leaders on Wednesday, July 10, one day before the party’s first anti-corruption protest that was held in Half-Way Tree, St Andrew.

At that meeting, the crime situation facing the country, as well as corruption issues, were reportedly discussed.

On Thursday, Phillips reminded that he has, on several occasions, asked the Prime Minister to convene such a meeting.

“Since they have not acted, we are going to act,” Phillips told reporters.

“We (the PNP) are hosting one (stakeholder’s meeting) at the conference centre on the 30th of July and we have invited all critical stakeholders including the leadership of the security forces, the academic community, the private sector, the churches and others,” Phillips added.

Phillips said the Opposition will be willing to accept the presence of the Government” if they choose to attend.”

“But I am throwing it out, we cannot afford the inaction of the Government any longer, and we are going to be taking direct action across the country until they hear the voice of the people,” Phillips said.

Thursday’s corruption protest saw a relatively sparse turnout when compared to the first anti-corruption vigil that was staged one week earlier in Half-Way, St Andrew.

Prior to, and since the Half-Way Tree vigil, both the PNP and the governing Jamaica Labour Party (JLP) have accused each other of being more corrupt.

Meanwhile, Peter Bunting, the Member of Parliament for Central Manchester who is challenging Phillips for the presidency of the PNP, has responded to criticisms that neither he nor his supporters have turned up at the corruption protests.

In a statement issued on Wednesday, Bunting said he is in “full and total support" of protests against corruption (which) the PNP held last week Thursday, and the one planned for Montego Bay tomorrow (Thursday) morning.

Bunting also indicated that he is looking forward to personally participating in and mobilizing his constituency and parish when the PNP organised protests “come to Central Jamaica.”

Manchester is part of Region Five.

“Corruption not only depletes resources that could otherwise be available to improve the quality of health care and education of the Jamaican people, but corruption is the handmaiden of organized crime,” said Bunting.

He said public corruption weakens the will of political leadership and policymakers to take decisive actions against the top criminals at all levels of the society and damages Jamaica’s good name abroad.