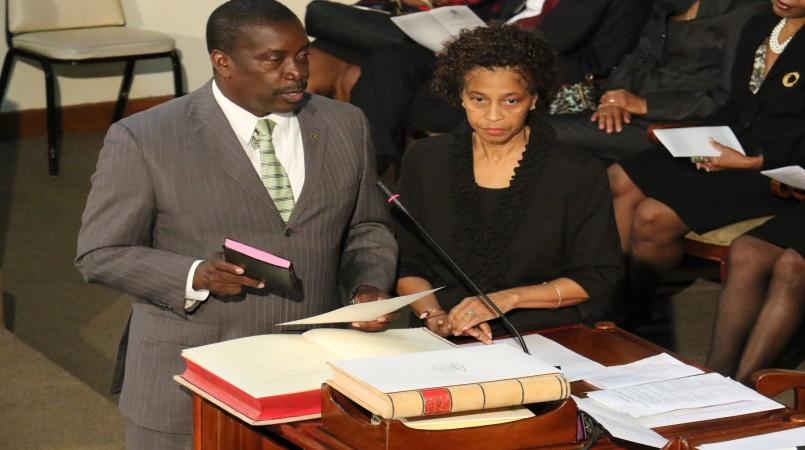 File photo of Montague being sworn in as a Member of Parliament in 2016.

Numbered among the 29 was a St Mary man who was reportedly involved in lottery scamming and gang activity.

Minister Montague argued at a hastily convened press conference in August that it was determined that the man was a security asset who provided vital information on corrupt activities at the FLA.

According to the PNP, the Prime Minister should take action as it has now been proven from testimony at the Internal and External Affairs Committee of Parliament by the Permanent Secretary in the Ministry of National Security, Dianne McIntosh, that Montague “deliberately misled the Jamaican people.”

The PNP recalled that at the August press conference, Minister Montague, after it was revealed that he had approved 29 gun licences to persons with "adverse traces", claimed that those licences were granted on the advice of a committee he had empanelled that unanimously overruled the decisions of the FLA, its Review Board and the police.

“This resulted in 29 gun licences being issued to persons who should have been rightly denied the permits,” the PNP said in a statement Thursday.

It noted that at his press conference in August, Montague claimed that he, as Minister, took the additional policy decision to improve the governance of this process, explaining then that he empanelled a committee of six persons, very senior within the national security framework to sit as part of an appeals panel.

But, in answering questions before the Internal and External Affairs Committee of Parliament on Tuesday, McIntosh stated that there was no review committee as described by Minister Montague.

The parliamentary Opposition noted that McIntosh explained that there is normal administrative support to all ministers from the various units within the Ministry, such as the Protective Security Division and the Legal Division, as a routine course of action which is available to all security ministers.

It said that based on the obvious contradiction between Minister Montague’s statement to the press and the testimony of the Permanent Secretary to the parliamentary committee, “Minister Montague’s account about this specially empanelled review body amounts to a flat-out lie to the nation.”

“It is an accepted principle in political administration that a Minister lying to cover up his actions is considered a high crime and therefore should be sanctioned,” said the PNP.

“Prime Minister Andrew Holness continues to embrace the lack of integrity and candour as clearly displayed by Minister Montague as transferring him from one ministry to another does not address the core issue of deceit,” the PNP added.