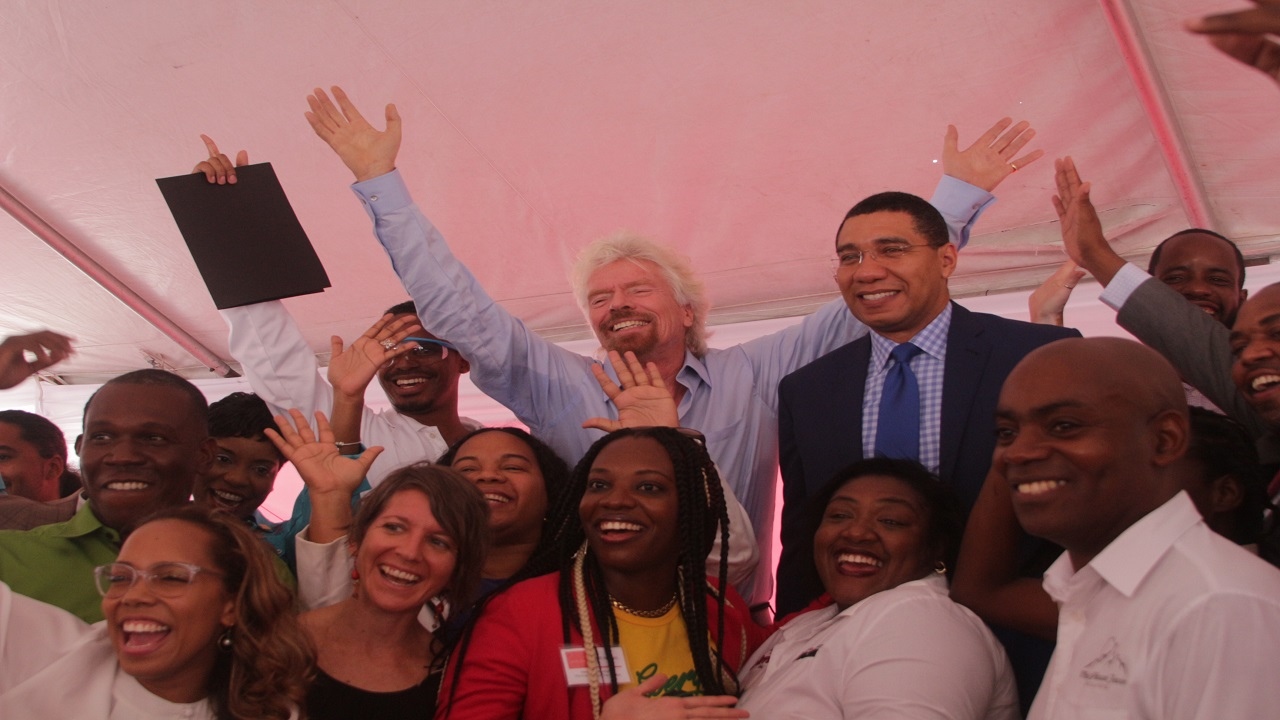 Prime Minister Andrew Holness and Sir Richard Branson, among others, celebrate the re-launch of the Branson Centre of Entrepreneurship in Kingston on Tuesday. (PHOTO: Marlon Reid)

The Branson Centre of Entrepreneurship in the Caribbean officially shifted its regional headquarters to Kingston, with founder Sir Richard Branson cutting the ribbon in Liguanea on Tuesday morning.

The Centre was moved from Montego Bay, St James to facilitate the relatively larger volume of entrepreneurial start-ups that apply for funding from the Corporate Area.

“Most of our accelerators are here. All of our partners are here and we want to create new opportunities for entrepreneurs in Jamaica,” Rickards said.

She said the way forward after the relaunch will be to get high-potential entrepreneurs with external capital. The entity has also been certified by the Development Bank of Jamaica (DBJ) to issue vouchers to entrepreneurs to offset cost to access the services, which will now be accessible to the general public.

The event was attended by politicians led by Prime Minister Andrew Holness, members of the diplomatic community, entrepreneurs (many of whom have benefited from the Centre), and corporate executives including representatives of Branson's Virgin Group of Companies.

The Branson Centre of Entrepreneurship was founded in 2011 to be a hub and accelerator for Caribbean nationals interested in starting their own businesses.

Since then, the entity has grown considerably with over 900 entrepreneurs accessing its online trading platform.

The entity has helped entrepreneurs in many ways including training, mentorship, different forms of funding opportunities, exposure and networking. It has also done workshops for the general public.

According to Rickards, each of the small entrepreneurs that they have helped has in turn created an average of three new jobs, resulting in over 300 new employment opportunities. They have also grown their average revenues by more than 150 per cent since joining the programme, she said.

She said, “we have achieved some great success in Montego Bay so we are contributing to the growth of the Jamaican economy. We have contributed a total of US$594,000 (approximately J$75m) to entrepreneurs to date.”

She said the Branson Centre for Entrepreneurship has helped 240 businesses in the British Virgin Islands since going there in March last year, with 12 official entrepreneurs, three of those making the trip to Jamaica for the relaunch.