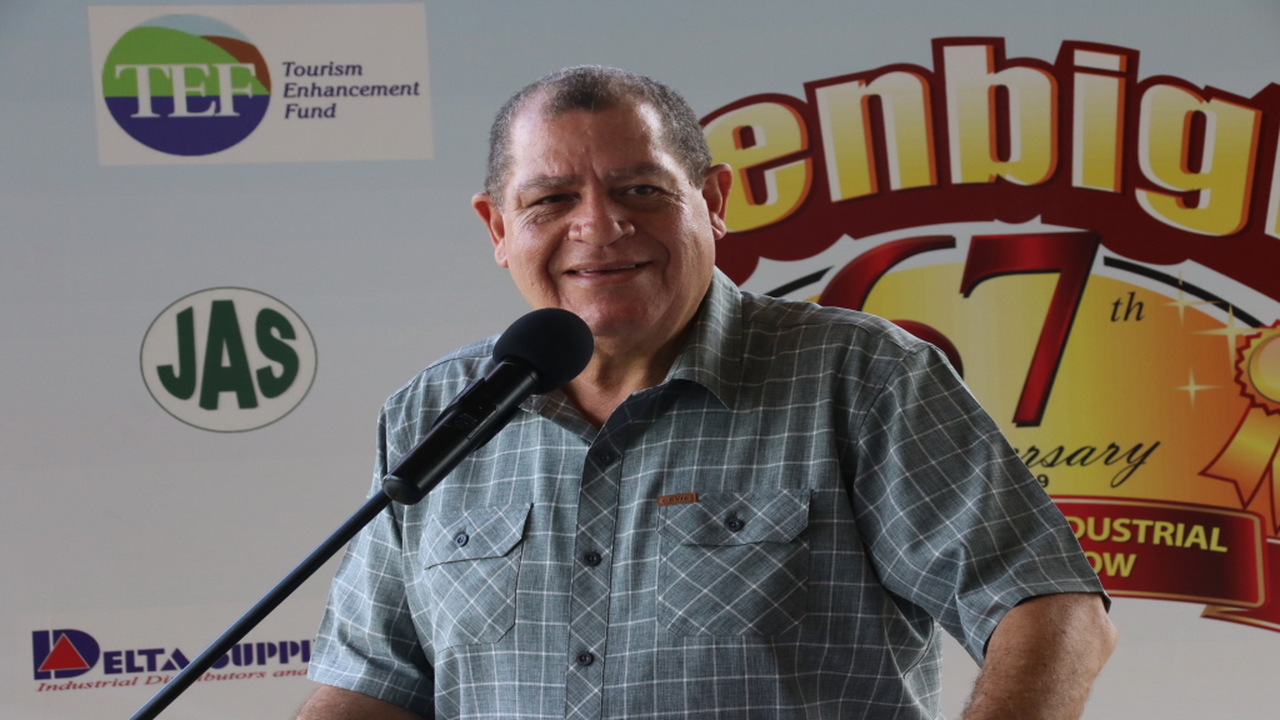 Industry, Commerce, Agriculture and Fisheries Minister, Audley Shaw, has hailed the success being generated by local farmers through their own initiatives in harvesting rainwater and cultivating hope in their enterprises, including under a particular ongoing project.

Speaking on day two of the annual Denbigh Agricultural, Industrial and Food Show in Clarendon on Monday, Shaw pointed to a project that he said is being implemented in some 70 training institutions island-wide, in which students as young as six years, and unattached youth in their 20s, ”are learning how to grow plenty food where water is scarce”.

The minister said reports from the project indicate that with the use of water storage tanks and harvesting rainwater for drip irrigation systems, a significant number of schools have been reaping bumper harvests in their gardens. He pointed to Medina Primary School in Manchester, where some 1,000 pounds of sweet potato, 1,400 pounds of Irish potato, 500 pounds of sweet pepper and 500 pounds of tomatoes have reportedly been reaped under the programme.

“I wish to commend and applaud the young farmers, and the Jamaica 4-H Club, who, working in collaboration with the United Nations Development Programme (UNDP), have been successfully implementing this project, funded by the Japan Caribbean Climate Change Partnership (JCCCP) project,” Shaw stated. 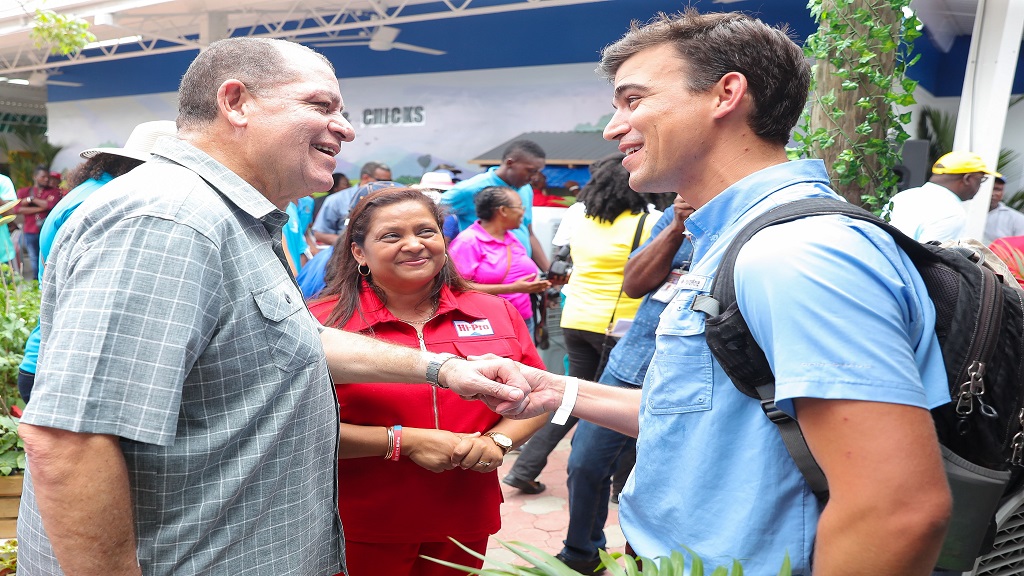 Industry, Commerce, Agriculture and Fisheries Minister, Audley Shaw (left), greets a farm interest inside the Hi-Pro Village on day two of the Denbigh Agricultural, Industrial and Food Show 2019 in Clarendon.

“They have taken the seed of opportunity and are demonstrating possibilities. They are defining the way of the future to an agricultural sector that holds a myriad of economic opportunities,” added.

He said among his central plans for the agricultural sector is for a much wider scale of rainwater harvesting and mini drip irrigation systems, which he urged the Jamaica Agricultural Society (JAS), organisers of the Denbigh show, to partner with the ministry on as a top priority

“I have a plan and ambition for at least 50,000 farmers in Jamaica to get access to drip irrigation,” declared Shaw, pausing, however, to indicate that the plan is not for "a giveaway", but a partnership in which “you put in something and the Government (also) puts in something”.

Like Governor General, Sir Patrick Allen, indicated the day before, Shaw pointed to the contestants vying for the National Farm Queen title, stating that in a visit to his offices a week before, the contestant demonstrated impressive knowledge of agriculture.

“Some have been trained (in agriculture), some are in training, others are with HEART, the Jamaica 4-H Club and so on, all with a sincere interest in and knowledge of agriculture, and I especially applaud their initiative, working with the JAS, to establish a young farmers’ association. This co-ordinated and organised approach will foster the continued interest of our young people in agriculture,” Shaw stated.

He said $35 million is being provided by the ministry to assist with short-term mitigation of the ongoing drought conditions.

In declaring that farmers in irrigated areas, with some assistance from the allocation, “are responding to the challenge positively”, he said there may be increases in some food prices, which is a normal situation at this time of year, but it “should not require any large-scale importation of the affected crops”.

He cited the need to continue to modernise the agricultural sector, and to make it more adaptable to varying conditions. That process, he said, includes transformation and restructuring of the agencies within the sector, and also the industries therein. 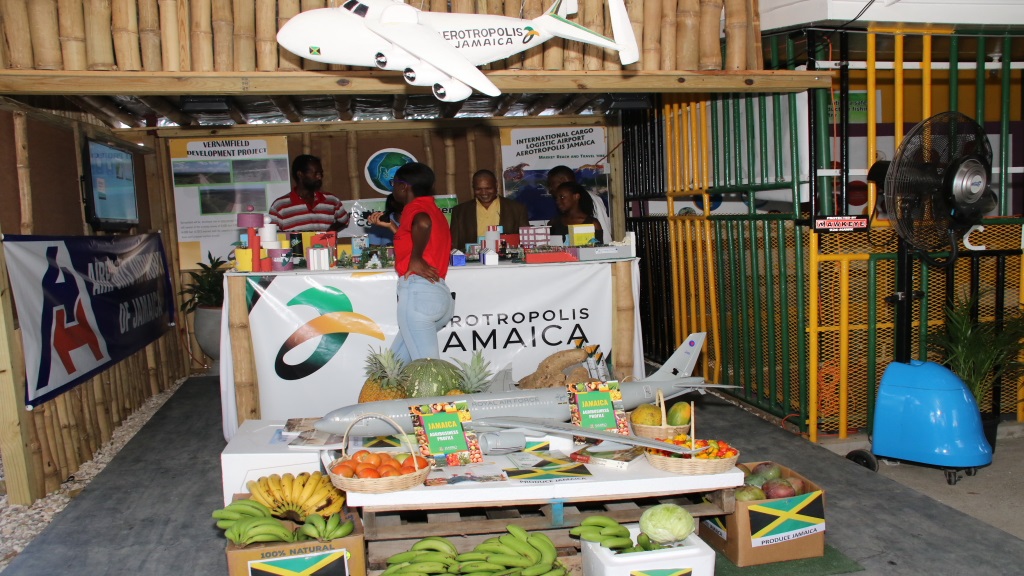 The minister said that perennial process is now being undertaken in accordance with the Government’s Modernisation and Transformation Programme, with the merging and modernisation of several agencies in the ministry, including the JAS, which is being transitioned into a formal Non-Government Organisation (NGO).

“The goal of this transformation exercise is to make the JAS a stronger, more modern and more agile organisation representing its 230,000-strong membership and lobbying for their causes,” said Shaw.

“And so, we have met, in retreat. We have examined the various issues, and we have agreed to work together to agree on the best model for the JAS, going forward,” he added.