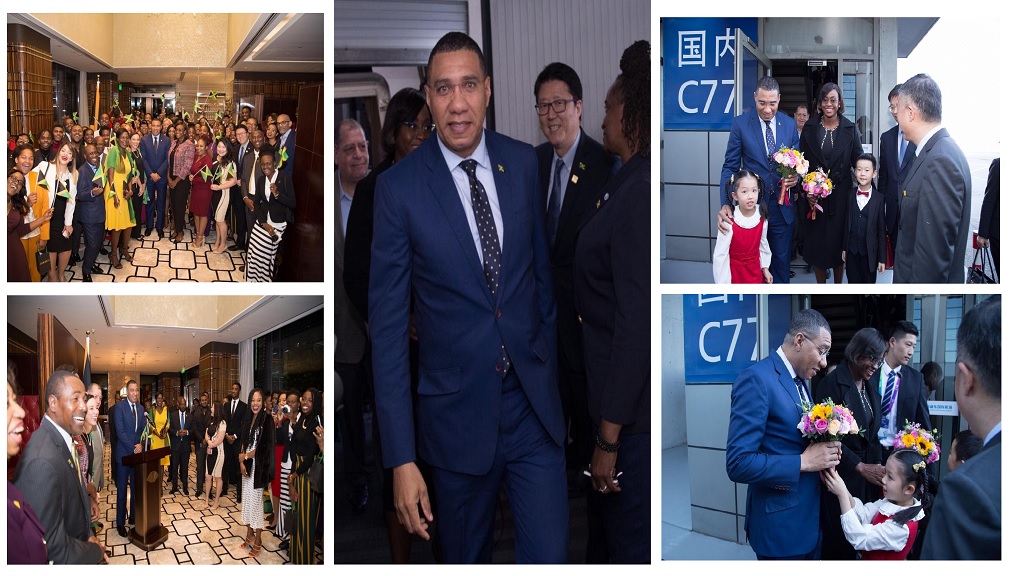 Combination of photos released by the Office of the Prime Minister.

Holness' trip will take him to four key cities in China including Shanghai, Shenzhen, Zhuhai and Beijing.

The official working visit is highlighted by bilateral discussions with President of China, Xi Jingping, municipal leaders, other public and private sector officials, investors and the members of the Jamaican community in China.

Holness will address the opening session of the China International Import Exposition (CIIE) and tour one of the world’s largest expos along with President Xi and Minister of Industry, Commerce, Agriculture and Fisheries, the Audley Shaw.

See OPM photos of Holness' arrival in China and meeting with the Diaspora in the gallery below.

The prime minister will also get a first hand view of China’s shipping and logistics operations during a tour of the Yangshan Port.

He is slated to visit several historic monuments and areas including the monument of the People’s Heroes in Tiananmen Square, Beijing, where he will lay a floral tribute, and the Great Wall.

Prime Minister Holness will meet with Premier Li Keqiang and engage in a series of bilateral meetings.

He will wrap up his official working visit on Saturday, November 9.

Holness is accompanied by his wife, Member of Parliament Juliet Holness and is supported by Audley Shaw, Minister of Industry, Commerce, Agriculture and Fisheries; Senator Kamina Johnson Smith, Minister of Foreign Affairs and Foreign Trade; President of JAMPRO, Diane Edwards; and senior technocrats from MICAF and the Ministry of Foreign Affairs.

Holness will return to the island on November 10.

Minister of National Security, Dr Horace Chang is in charge of the Government during the period.