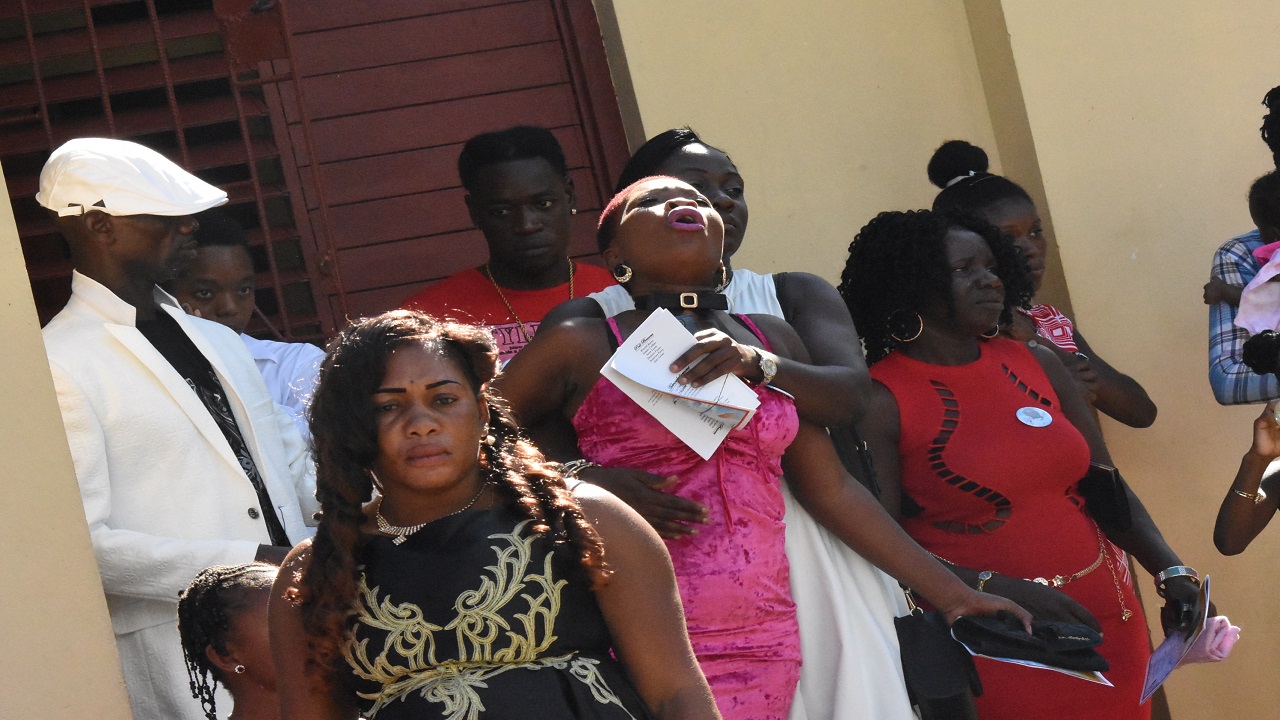 Tears flowed abundantly from family members and friends during and after the church service of notorious gangster, Marlon ‘Duppy Film’ Perry, who was buried on Sunday in the district of Lloyd’s in St Thomas.

While being a bit constrained during the unusually short 30-minute service, they held nothing back while the body was being taken from the church to the hearse, with one woman wailing uncontrollably for minutes.

Clad in a pink dress with matching colour spayed in her hair, she was assisted from falling by a few men, as her screams triggered the emotions of others, including many children, who had gathered for the calm service at the Lloyd’s Seventh Day Adventist Church.

While jumping up and down several times, the weeping woman hysterically shouted a few times, “Dem kill him, dem kill him”.

The other individuals who wept were more sombre, as they tried to hold on to memories of the man who was wanted by the police for years for numerous atrocities, including the killing of two policemen who were entertaining themselves in a game of domino when they were attacked and shot dead in St Thomas.

At the graveside rituals in Lloyd’s Cemetery, however, tears were completely absent, as the mood changed, with those who had gathered either singing along with the choruses that Pastor Linton Hamilton led or chatting among themselves.

“Marlon black yuh si. Him black, him black! Him look good though, although him black like dah piece a cloth deh,” said a young woman while pointing to a dress being worn by another woman.

It wasn’t clear how she got the opportunity to view Perry’s body, as the casket was not opened at the church or the graveside. Efforts to find out if she was among the individuals who rode in the hearse from the church to the graveside, were unsuccessful, as family members and friends declined all efforts to gain an interview.

Missing from both the church and the cemetery were the usual fanfare and excitement that are usually associated with the burial of individuals of Perry’s notoriety in Jamaica.

The dressing among those in attendance at the funeral was generally moderate, and the entire funeral proceedings were incident-free, with no suspicious-looking persons being noted at any stage of the activities.

According to Pastor Hamilton, the funeral service went as planned. He said he had met with the family a few times to offer counselling before Perry’s demise, as after he had shot to the top of the police’s wanted list, the family went through some trying times, including the burning of a few homes.

He said he had previously officiated at a funeral for an individual of Perry’s reputation, and he wanted to keep this service in line with what happened then.

He said with family members opting out of individual participation in the funeral service itself, it made it easy for the service to last only 30 minutes.

According to Hamilton, when he spoke with the police before the funeral, he was told that a strong police presence would be in place for the event, and was advised that a short service would be appropriate from a security standpoint.