Seven young Jamaicans and a Cuban living in Jamaica have been awarded scholarships to pursue studies at the School of Medicine in Cuba.

The students, five of whom will study medicine, one dentistry and two postgraduate medical specialities, were selected from a pool of 200 applicants.

Marianne Binta Konate Hernandez, the daughter of Cuban resident in Jamaica, will study medicine. Hernandez has Cuban and Ghanaian roots, a mixed origin that has coalesced in Jamaica, where she has lived most of her life. 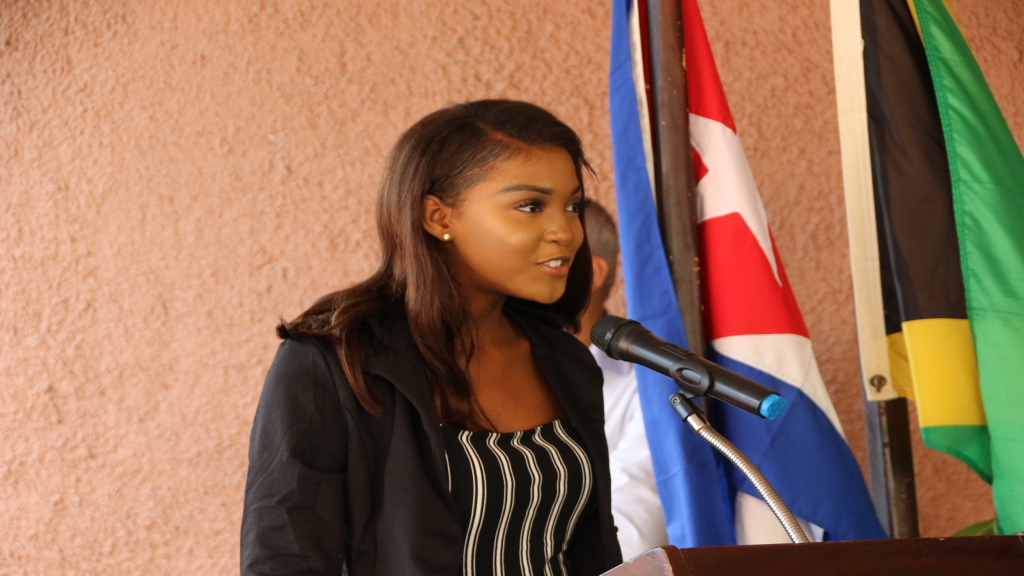 Pictured is Marianne Binta Konate Hernandez, a Cuban descendant who was awarded a scholarship.

Speaking at an awards ceremony at the Cuban Embassy on Trafalgar Road in Kingston last Friday, Cuban Ambassador to Jamaica, Inés Fors Fernandez said the students selected were dedicated with excellent academic grades.

She said the students “displayed the vocation to serve their communities and country, but whose humble origins have made it difficult for them to realise their dreams”.

Fors Fernandez further noted that the Cuban government has decided to be consistent with its solidarity and humanist vocation, in spite its current economic challenges caused by the impact of the international economic crisis and the reinforcement of the unjust US economic, financial and commercial blockade.

The medical students will be trained for public service in disadvantaged urban and rural communities, developing competencies in comprehensive primary care, from health promotion to treatment and rehabilitation.

“Once in Cuba, you will spend three to six months in a pre-medical connecting programme to address uneven educational backgrounds. Non-Spanish speakers, like most of you, study the language, since instruction is in Spanish,” Fors Fernandez told the students.

Click the slider for more photos of the awards ceremony captured by Llewellyn Wynter.

In encouraging the students to take advantage of the opportunities afforded to them, the ambassador said: “Become respected professionals. Save lives, help humble people. Do not look on which side you would live better, but on which side is the duty. That will be the best way to give back to Cuba.”

After completing their studies in Cuba, the students will return to Jamaica ready to make a useful contribution to the island’s development and to the well-being of Jamaicans.