PHOTOS: Cubans and others in Jamaica celebrate Fidel Castro's birthday 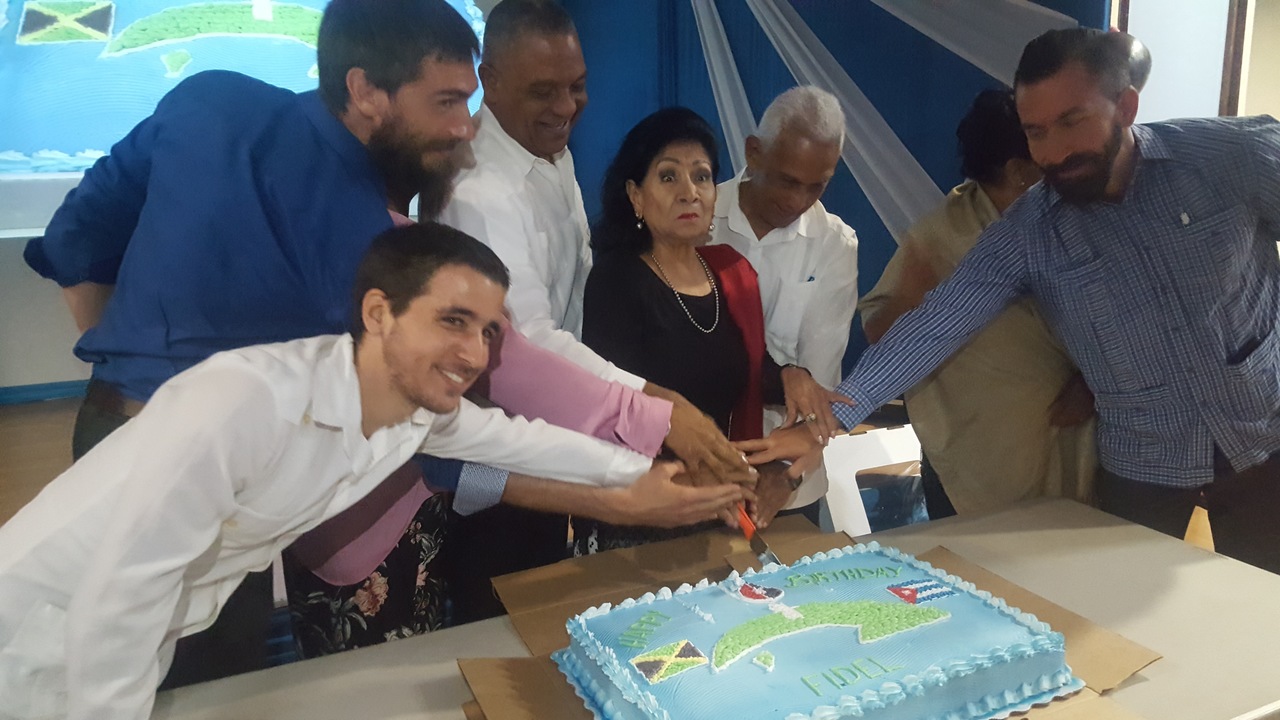 Members of the diplomatic community join with their Cuban counterparts in cutting a birthday cake in recognition of the 93rd birthday of former Cuban leader, Fidel Castro, during celebrations at the PCJ Auditorium in St Andrew on Sunday. (Photos: Marlon Reid)

The Cuban Embassy in Jamaica joined with Friends of Cuba and the Jamaica/Cuba Friendship Association on Sunday at the PCJ Auditorium in St Andrew to celebrate the life and work of Cuban revolutionary leader, Fidel Castro.

Embassy officials from Venezuela, Nicaragua, Panama and Japan, along with those representing the high commissions of South Africa and Nigeria, and as well as consulates of Guyana and St Lucia, blended with Cuban residents and visitors to Jamaica for a grand show of support for Castro.

A large contingent of Jamaicans was also involved in the celebrations.

The occasion, in recognition of what would have been Castro's 93rd birthday, was in keeping with the tradition of Cubans showing their love for their former leader on his actual birthday, August 13.

Cuba, primarily though Castro, has had a longstanding relationship with Jamaica, starting in 1972 when the two countries established a diplomatic relationship under then Jamaica leader, Michael Manley. Castro and Manley had a very close friendship.

Anecdotal speeches, as well as those heralding the work of Castro, formed the main course for the evening's celebrations, and were interspersed with video presentations and performances in songs. It ended with the cutting of a huge cake which was then shared for those who wanted to indulge.

Cuba's Ambassador to Jamaica, Ines Fors, in a speech read by Charge d'Affaires, Ulises Calvo, said Cubans have learnt many lessons from Castro. She also emphasised the relationships between Cuba and Jamaica.

"Fidel taught us may lessons: to be loyal friends, to remain together before adversity, and to draw strength from our unity to overcome the ever-increasing challenges of modern imperialism, she said.

"He taught us that internationalism is a duty and an honour for every revolutionary, that solidarity is not giving what we can spare, but share what little we have with our friends," she added.

According to Fors, Cuba has graduated more than 650 university students from Jamaica while having approximately 350 Cuban health and education workers all over the island.

Among the speakers was Horace Dalley, who represented Manley's People's National Party (PNP). Dalley the Deputy Chairman of the party, said Castro transformed Cuba while helping all developing countries during his time in power.

Dalley said Castro was able to unite all his forces against the imperialist system that was in Cuba at the time, to enable the country to have an "international spirit that is respected by the world, even the enemies".

Nicaraguan Ambassador, Briggett Budier, expressed the viewpoint of Castro having been a liberator of the downtrodden and forgotten.

"His intervention in different parts of the world wasn't to put boots unto to people, but to build and make people free. Socialism is one of the best things for the Caribbean because we are mainly Afro Caribbean, the most disenfranchised in the world," Budier said.

Charge d'Affaires of Panama, Rolando Barrow, said Castro was an impressive and outstanding personality who instantly drew attention and concentration wherever he was spotted. He said Castro helped many inner-city youths in Panama by allowing them into Cuba to study, and they are now helping to develop the country.

Dada Olisa, the husband of Nigerian High Commissioner to Jamaica, Janet Olisa, described Castro as having been a humanitarian. He said he got the opportunity to meet Castro while studying in Cuba, and he "was the embodiment of love all over the world".