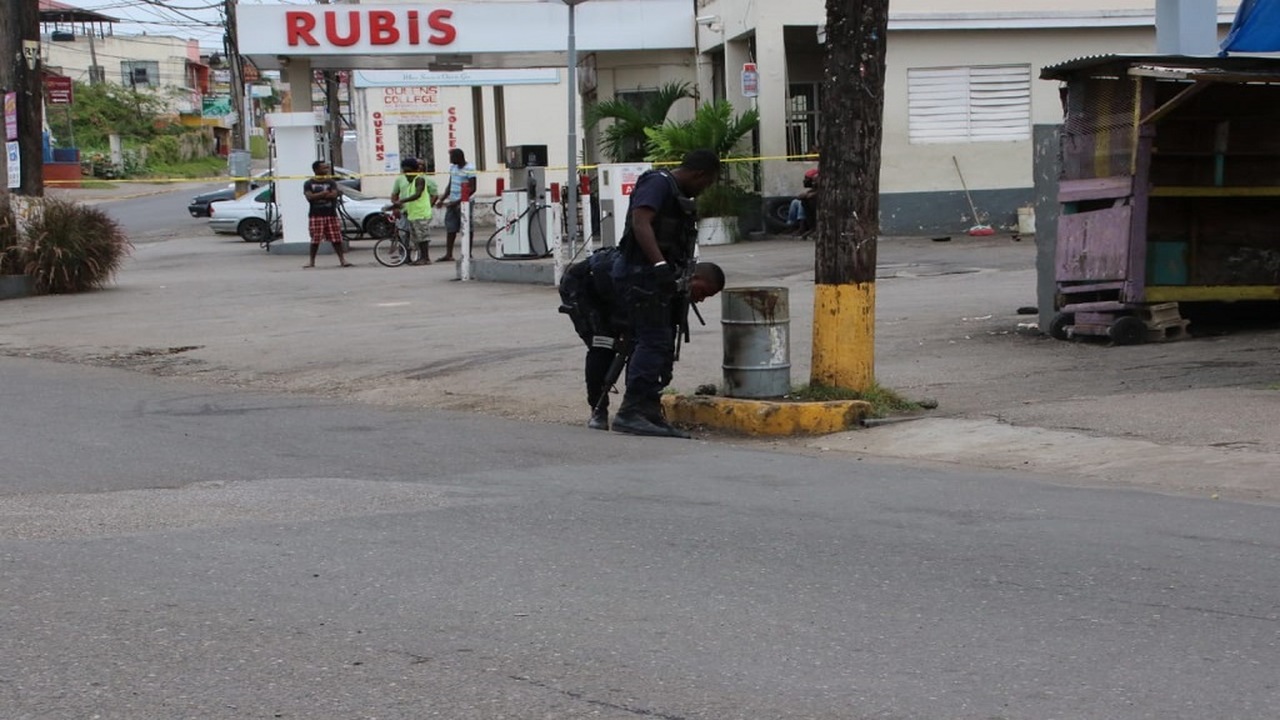 Police personnel examine the scene outside a supermarket at Guinep Tree in May Pen, Clarendon where heavily armed robbers were thwarted by police personnel on Sunday morning, but not before two lawmen were shot and injured in the gunfight.

Two police officers were shot and injured as they attempted to thwart a daring, daylight robbery spree that was being committed by heavily armed gunmen in May Pen, Clarendon on Sunday morning.

"Two policemen were shot this morning. It's an ongoing situation at this time, as police personnel still are on the scene," a representative of the CCU told Loop Jamaica reporter Claude Mills on Sunday morning.

A video showing several spent shells from a 12-gauge shotgun and other firearms outside the large, Chinese-operated supermarket in the Clarendon capital, has been circulating on social media.

Loop News understands that a police sergeant and a constable, both attached to the May Pen Police Station, came under gunfire while on foot and mobile patrol, respectively, in the Guinep Tree area of the town.

Cops injured in shoot-out in May Pen

Reports are that about 9:15 a.m., two motorcars with several men with high-powered weapons, descended on the Guinep Tree area and were in the middle of a robbery spree there, during which they opened fire on a vehicle reportedly on loan to the May Pen police. The constable received gunshot wounds to the face and right shoulder, and the sergeant, who was on foot patrol, challenged the men and was shot twice in the abdomen and buttocks, and in the groin.

The gunmen reportedly peppered the police service vehicle on the scene and a Toyota Mark X motorcar that was being driven by another police officer with bullets, during which the third officer also challenged the rampant gunmen.

One of the getaway vehicles, a white Toyota Probox motorcar, later crashed along nearby Howard Avenue in the town.

Both injured policemen were taken to the May Pen Hospital, where they are being treated for their injuries.

Loop News will be tracking the development to provide further details on the incident.