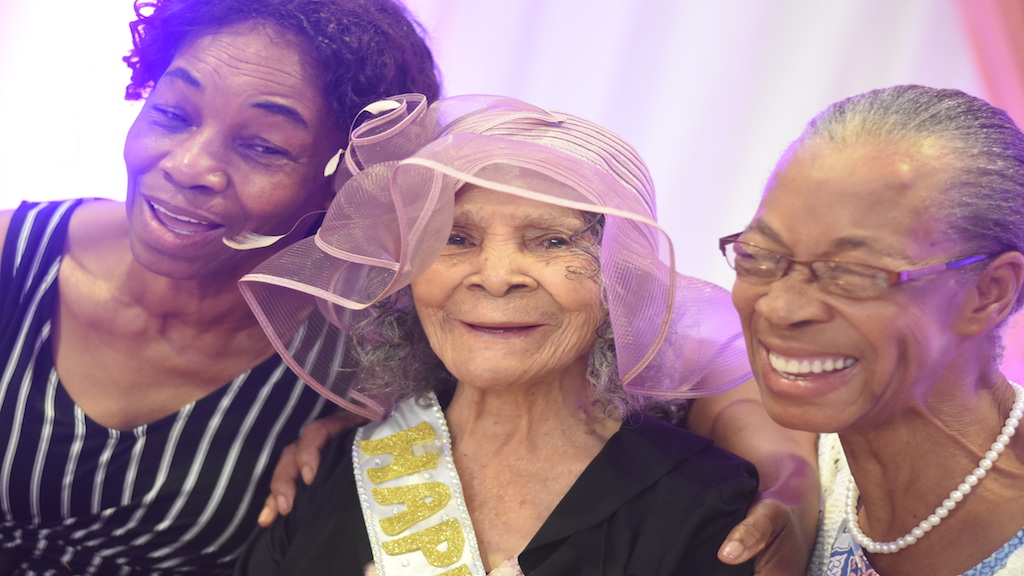 Centenarian Evelyn Stanley (centre) in the company of two of her daughters, Zelpha (left) and Dorothy, at her birthday celebration at the Knutsford Court Hotel in St Andrew on Friday. (Photos: Marlon Reid)

Evelyn Stanley (nee Goodall) was a picture of calm as her relatives and friends doted around her at her 100th birthday celebration at the Knutsford Court Hotel in St Andrew on Friday.

‘Miss Evelyn’, as she is affectionately called, was born on August 2, 1919, and the centenarian was the pride and joy at her birthday party.

Born in the rustic district of Farm in St Ann, she grew up in Orange Hill close to Brown’s Town in the parish.

She is the last surviving sister of 15 siblings, and only has one brother alive, who is aged 91.

Stanley was a farmer who sold her produce at the Brown’s Town Market to help keep her family afloat.

She's not as active as she was up to a few years ago, but is aging gracefully.

Even though she was transported into the hotel suite in a wheelchair, she mustered the strength to walk to her space at the head table.

According to Cornelius Brown of the Newland Seventh Day Adventist Church, Stanley is a devout Christian who started attending the church when she came to Kingston to live with her daughter.

“It is only God alone that has kept her this far,” he said.

Executive Director of the Students' Loan Bureau (SLB), Monica Brown is a long-time family friend who recalled that Stanley was never a woman to be mired in controversy, and was a respected figure in her community.

“Miss Evelyn is one of the hardest workers I know. She was always respected and admired in the community,” Brown said.

There were many tributes in song and the spoken word, but it was the anecdote read by Master of Ceremony, Kevoy Burton, that drew the most resounding round of cheer and laughter.

“Miss Evelyn was known to be an expert at using a coal stove, wood fires and kerosene oil stoves to cook. She knew exactly when to remove the wood or coal, so that the food wouldn’t be burnt or the water dried out too quickly,” Burton said.