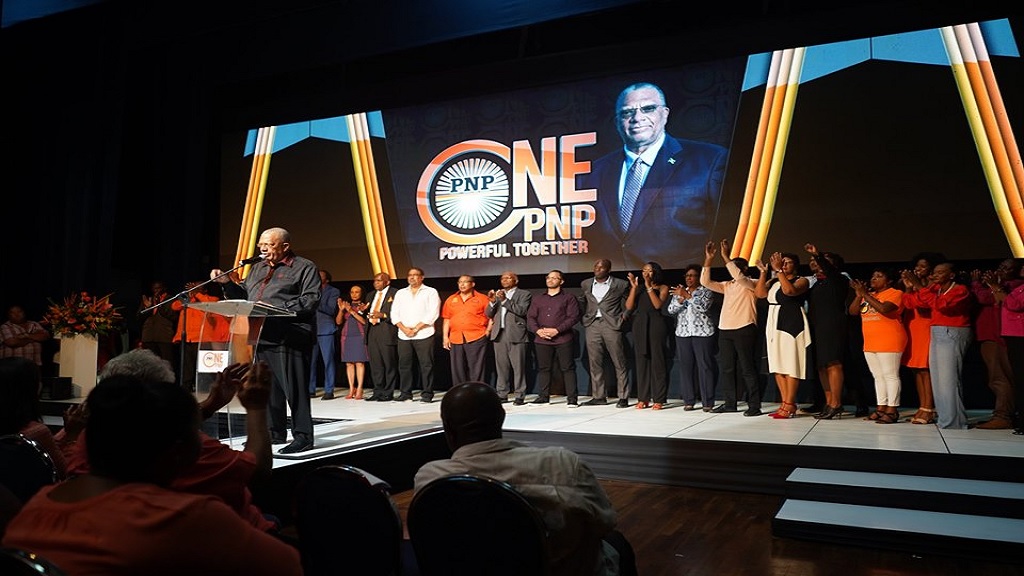 Opposition Leader Dr Peter Phillips addresses Comrades at the launch of his 'One PNP' campaign.

The ‘One PNP’ campaign of People’s National Party (PNP) President Dr Peter Phillips has responded quickly to a poll commissioned by his challenger Peter Bunting that shows Bunting as the candidate who would have less challenge defeating Andrew Holness and the Jamaica Labour Party (JLP) in the next General Election.

More importantly, when asked ‘Who had the better chance of beating Prime Minister Andrew Holness?’, 36 per cent of respondents said Bunting, 16 per cent said Phillips, 19 per cent were ‘not sure’ while a significant 29 per cent said ‘none’.

However, Chairman of the Phillips campaign, Senator KD Knight has rubbished those findings, describing them as “garbled, incomprehensible and out of line with OnePNP’s polling data.”

“The data presentation was obviously designed to confuse the public but in particular, the party delegates, who are overwhelmingly in support of the President of the People’s National Party, Dr Peter Phillips.

“In none of the answers provided to the questions did they account for 100 per cent of the sample size, which gave the distinct impression that the numbers were being selectively presented.

“This data makes no sense without knowing the size of the undecided elements,” Knight stated.

“The OnePNP campaign, whereas it acknowledges the right of Rise United to highlight numbers to make its own case, it is important that delegates be warned of the convenience of the results presented,” Knight said.

And, while promising to make the results of the Johnson poll public by the end of the week, Knight gave a synopsis of those findings.

When the question was asked, ‘What if Peter Bunting were the leader of the PNP and Opposition Leader?”

Thirty-six per cent of respondents indicated that they would vote for Holness, 27 per cent said Bunting, 12 per cent were undecided, two per cent declined to answer and 23 per cent said they were not voting.

Knight said the OnePNP campaign rejected, in particular, the claim that the increase in PNP support by 12 percentage points over the past two months was entirely attributable to the work of the Bunting campaign. Senator Knight said any such claim had to be a farce, as comrades from both campaigns had been active in the field over the same period.

Bunting, the Member of Parliament for Central Manchester, is challenging Phillips for the presidency of the PNP. They will face off against each other in a special delegates’ conference on September 7.

To date, Bunting has a slight edge in the number of Members of Parliament backing him.

For his part, Phillips has claimed the majority support of the women in leadership in the party and of the Opposition Senators.

As it relates to the eight Opposition Senators, all but one have declared support for Phillips. Senator Wentworth Skeffery can not declare as he is a member of the party’s secretariat.