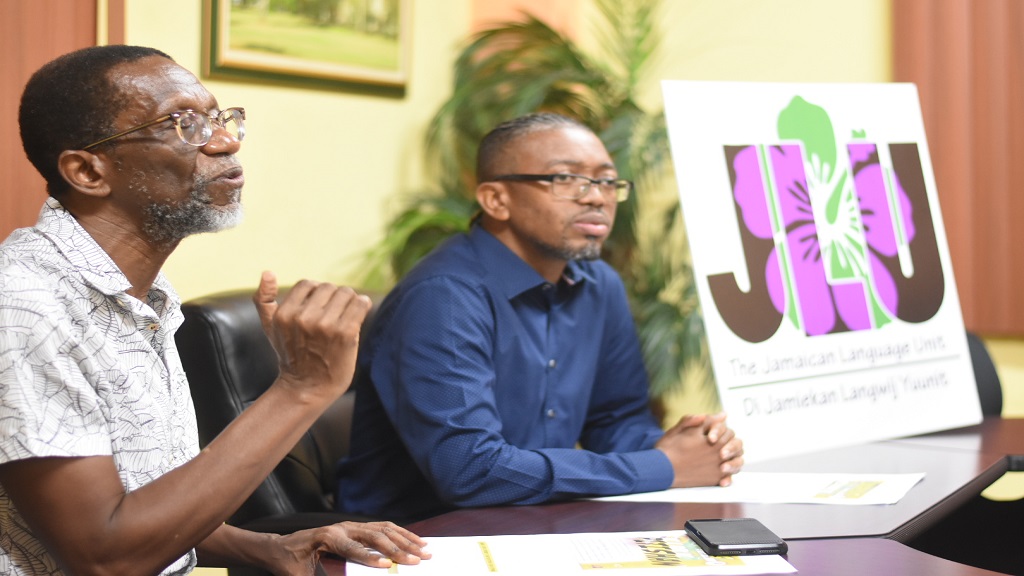 Professor Emeritus Hubert Devonish (left) of the Jamaica Language Unit (JLU) makes a point as he addresses journalists at a press conference on Thursday. Seated beside him is head of the JLU, Dr Joseph Farquharson. (Photo: Marlon Reid)

The Jamaica Language Unit (JLU) of the University of the West Indies (UWI) has intensified its drive to make Jamaican an official language by launching a petition which can be found on the website of the Office of the Prime Minister.

Speaking at the launch of the petition at UWI on Thursday, Professor Emeritus Hubert Devonish, an associate of the JLU, argued that Jamaican should be made an official language due to the fact that most Jamaicans who do not converse in English are often treated unfairly when they are in the public domain.

He said it was full time our legislators realised that endorsing patois was a step in the right direction.

“The idea is that we need to ensure that the majority of Jamaicans who have learnt Jamaican as their first language have all the same rights everyday. There should be an end to the tittering where they put you on speaker so everybody can hear how you chat bad,” he said.

The JLU said it had conducted several surveys and the results reveal that 70 per cent of those polled support patois being made an official language.

“We already speak two languages. International studies have also shown that children who are taught in their native tongue from early education straight through to the tertiary level do much better than those who are taught in the official language. We need to make it official. Just dweet,” he said.

Head of the JLU, Dr Joseph Farquharson, said the move is long overdue.

“The services provided by the state should be available not only in English, but also in Jamaican, the language spoken by the majority of Jamaican people. By doing so we would not disenfranchise any segment of our population,” Farquharson said.

The JLU is seeking to acquire 15,000 or more signatures to the petition in 40 days in order to force the government to issue a statement on the issue.

The petition can be signed at https://opm.gov.jm/participate/jamaica-house-petition/sign-petition/?pet=100.