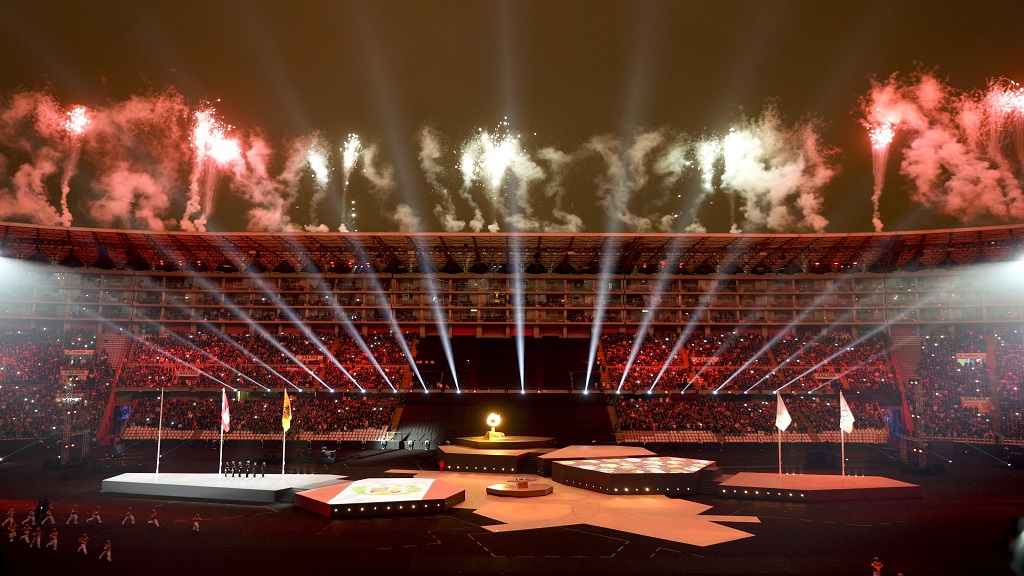 The Pan American flame is on the center stage during the closing ceremony of the Pan American Games at the National stadium in Lima, Peru, Sunday, Aug. 11, 2019. (AP Photo/Martin Mejia)

Dancers in colourful costumes took the capacity crowd of 50,000 at Lima's National Stadium — and millions following across the world — on a trip along Peru's coast, over its mountains and deep into the dense forests and jungles of the Amazon.

The Pan American Games closed Sunday with a ceremony that gathered nearly 1,000 performers from more than a dozen nationalities.

The ceremony that capped the 17-day multi-sport event paid homage to Andean civilizations with the set design inspired by stonework from walls used by the Incas to build their colossal cities. It also highlighted the natural wealth of a country whose name itself, from the Quechua Indigenous word, means land of abundance. But it also showed a modern side of Peru with a DJ mixing cumbia beats on a stage-turned-dancefloor, and colorful "Chicha" posters and graffiti that are often on display on the streets of Lima.

Fireworks burst at the end of a ceremony that also included performers dressed as hunters, fishermen and warriors, a parade of athletes from the 41 competing countries, and a woman who played a tiny Andean guitar known as the charango.

It was a huge way to close the Games that showcased world-class venues, world-class cuisine and enthusiastic fans who braved Lima's chilly, damp weather to cheer on athletes from across the Americas.

The tournament also featured the debut of surfing in a country that is known as the Hawaii of South America and that rode a wave of support at home to dominate with gold medals and a likely ticket to Tokyo 2020.

Nearly 7,000 athletes competed in the games. A record 21 of the 61 sporting disciplines served as qualifiers for next year's Olympics. The Americans finished atop the medal standings with 293, followed by Brazil with 171 and Mexico with 136.

The British Virgin Islands and Aruba won their first medals. Jamaica's Shelly-Ann Fraser-Pryce broke the 40-year-old Pan Am Games 200-meter record and El Salvador flexed its muscles winning both men and women's categories in the debut of bodybuilding. Colombia's two-time BMX Olympic gold medalist Mariana Pajon and triple Greco-Roman wrestling gold medalist Mijain Lopez from Cuba cemented their legacy in their sports by winning it all.

Athletes and visitors were also able to taste why Peru's cuisine is famous worldwide for its delicious blend of indigenous traditions with European, African and Asian influences with an abundance of seafood from the Pacific Ocean.

Fans roared when the Panam Sports president said that they had been "the best Pan American Games in history."

Although the Pan Am Games closed with a grandiose finale, the big bash will be likely followed by a bad hangover. Peru must return Monday to the reality of its political woes. Former President Alejandro Toledo was recently arrested in the U.S. following an extradition request. He's wanted in Peru on accusations of taking bribes from Odebrecht, a construction Brazilian company at the center of Latin America's biggest corruption scandal. In April, former President Alan García mortally wounded himself with a gunshot to his head as officers waited to arrest him in a graft probe linked to the scandal.

Peru's largest ever sporting event came at price tag of about $1 billion. Organizers said that was about half as much as Toronto 2015 and that the project created world-class infrastructure for the 9 million residents of the Peruvian capital located in a desert across from the Pacific Ocean. But some said the government should have instead spent that money in poor communities that lack drainage, roads and drinking water in one of the world's driest capitals.

At the end of the Sunday's ceremony, a couple under a chandelier of white handkerchiefs danced for the last time. When she threw her handkerchief into the air, the flame of the Pan Am Games was put out. The flame will be lit again in 2023 when the Games will be hosted in the Chilean capital of Santiago.