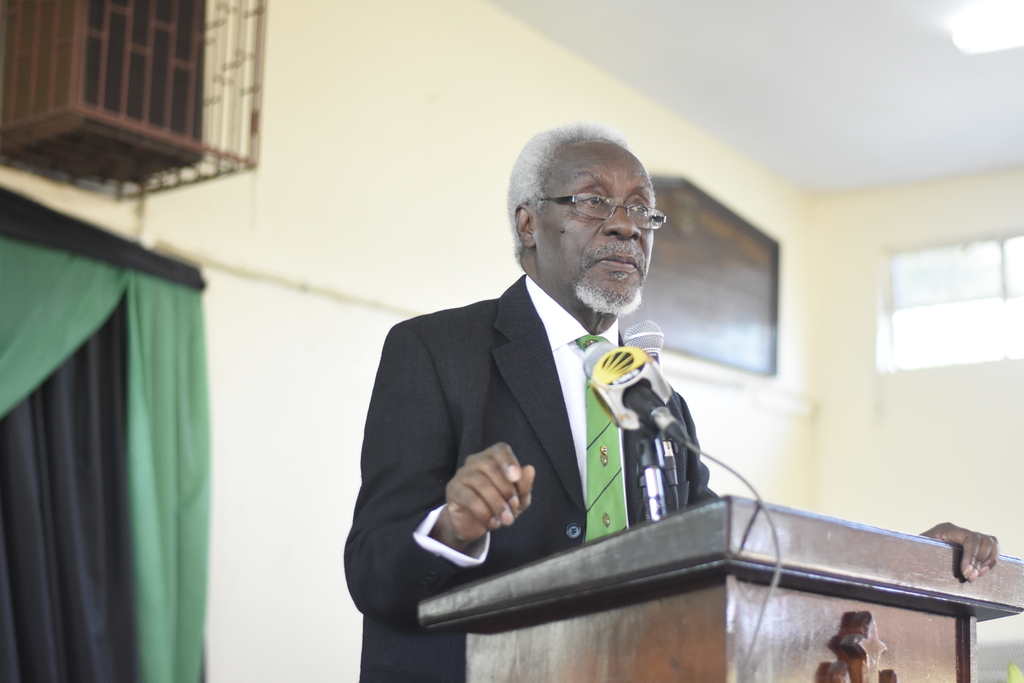 Former Prime Minister and Calabar Old Boy, PJ Patterson Patterson said he has taken note of various incidents on the school grounds, which he said: “doesn’t cause anybody any pleasure.” (Photo: Marlon Reid)

Patterson shared the words of wisdom with Calabar students during a visit to his alma mater on Wednesday as part of the Kingston & St Andrew Development and Homecoming Foundation’s Student Motivation and Empowerment programme.

The initiative is aimed at encouraging students to pursue peace and excellence, by fostering an understanding of, and commitment to, the principles and standards expected of good and productive citizens.

Patterson said he has taken note of various incidents at the Red Hills Road, St Andrew-based school grounds, which he said “do not cause anybody any pleasure.”

The former PM recommended that prefects, who serve as leaders in the school, can help to stomp out certain unscrupulous activities.

Patterson told the boys to be guided by the school’s motto: “The utmost for the highest”, as they seek to help to build Jamaica, just as he and others who in various fields have.

Click the slider for more photos by Marlon Reid from the empowerment session.

He reminded the students that they are a part of the group of educated Jamaicans who are expected to use their knowledge to contribute to national development while being socially aware, spiritually responsive, conscious and tolerant of diversity.

Calabar must look to produce vibrant productive citizens, whose education, training and socialization, prepare them to be responsible citizens, capable of good, wholesome human interactions and who add value to national outlook, the former PM and People's National Party president said.

“Here at Calabar as indeed elsewhere in our secondary schools, traditional and non-traditional alike, we have to provide the training in order to build Jamaica as the place of choice to live, work, and raise families and do business,” Patterson added in reference to the Vision 2030, which was established under his leadership.

He said: “Jamaica as a nation needs to produce in our boys, the skills the energy, the dedication that can build true respect for self and true respect for others that is the only way we will have lasting peace and prosperity within our native land.”

The KSADHF’s Student Motivation and Empowerment programme began with Prime Minister Andrew Holness’ visit to the Penwood High School, in his constituency, on November 6.  He spoke on leadership development, civic responsibility and how to get to the next step to achieve individual goals.  The prime minister engaged with the students who asked questions for about one hour after his presentation.

At the recent official launch of the programme, Custos Steadman Fuller, Chairman of the KSADHF noted that the objective was to get 40 outstanding citizens to begin a conversation with young Jamaicans who have been stigmatized as rude and uncouth.