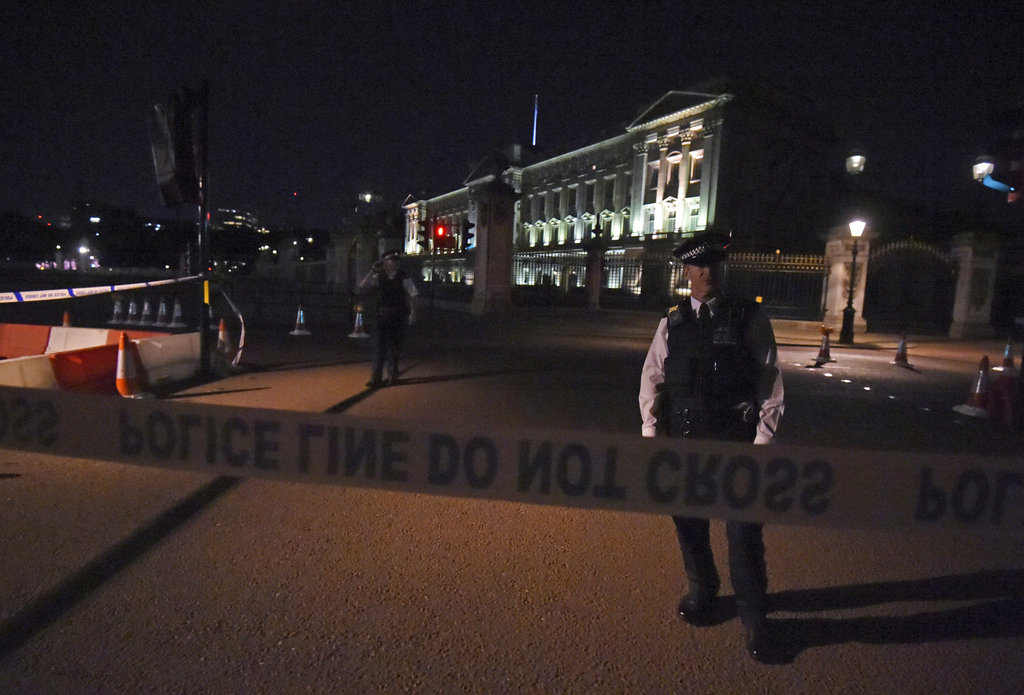 A police cordon outside Buckingham Palace where a man has been arrested after an incident, in London, Friday Aug. 25, 2017. (Lauren Hurley/PA via AP)

British counter-terrorism police on Saturday were investigating a man who was detained after he drove a car at police outside Buckingham Palace then "reached for a 4-foot sword," injuring three police officers.

"Uniformed officers then confronted the driver of the vehicle and during that confrontation, the driver reached for a 4-foot sword" in the car, said Dean Haydon, commander of the Metropolitan Police counter-terrorism branch.

Police believed the suspect was acting alone and were not looking for other suspects Saturday. Counterterror officers were carrying out searches in Luton, north of London, where the suspect was from.

Kiana Williamson said she saw officers trying to wrestle a man out of a car that had stopped near the palace. In less than a minute, "the man had been restrained and looked almost unconscious by the side of the road," Williamson said.

The suspect was taken to the hospital for minor injuries and remained in custody in a London police station. No one other than him and the police officers were injured.

British media reported that no members of the royal family were in Buckingham Palace at the time.

The police presence in London was stepped up because of the long Bank Holiday weekend and the annual Notting Hill Carnival, a busy street festival that attracts huge crowds.

Buckingham Palace did not comment on the incident and tours of parts of the palace that are open to the public in the summer were unaffected Saturday.

Last year, a man convicted of murder climbed a palace wall and was detained on the palace grounds while the queen was at home.

Jamaican muslim cleric, wanted in US on terror charge, arrested

Van plows into crowd in Barcelona; Police view it as terror