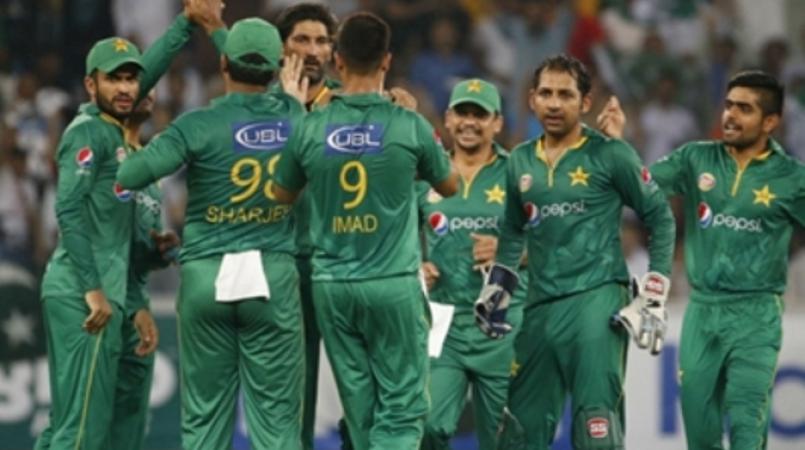 File photo of Pakistan players celebrating during a match.

The ICC Champions Trophy holders were embarrassingly bounced out for 105 in a seven-wicket win for West Indies in their first game of the tournament but showed what they are capable of at the same venue three days later.

Mohammad Hafeez top scored with 84 from only 62 balls after Jason Roy dropped him on 14, which summed up a characteristically below-par showing from the hosts in the field as Pakistan posted 348-8.

The classy Root (107 off 104) took advantage of being put down by Babar on nine by crafting the first hundred of the tournament and put on 130 for the third wicket with the explosive Buttler (103 from 76).

Root and Buttler - whose century was the fastest by an England player in a World Cup match - were dismissed by Shadab Khan (2-63) and Mohammad Amir (2-67) respectively soon after reaching three figures to make it advantage Pakistan.

Wahab Riaz struck twice late in the innings as Pakistan stopped the rot and gained revenge for a recent 4-0 series defeat to England.

What does it mean? Pakistan must be taken seriously

Eoin Morgan said he was prepared for Pakistan's 'A-game' and Sarfraz's side proved they should never be taken lightly with a brilliant batting display.

Fakhar Zaman (36) went out all guns blazing with a license at the top of the order and Hafeez showed age is no barrier, punishing Roy for putting him down a skyer early in a classy innings with powerful hitting and great timing.

Babar also batted with great fluency and captain Sarfraz silenced his critics with a quickfire half-century as Pakistan made England, who were sloppy in the field, toil.

England were in big trouble on 114-8 when Shoaib Malik snared Ben Stokes caught behind, but Root and Buttler set up a tense finale.

Root provided the glue, ticking over with aggressive running along with Buttler and putting away loose deliveries with an orthodox approach to score at more than a run a ball, hitting 10 fours and one big six down the ground off Hafeez.

Buttler played his typically expansive shots from the start of his magnificent knock and blasted two huge sixes with the tension building, but he and Root gave it away with tame dismissals soon after raising their bats to leave England facing a tall order.

Eyebrows were raised when Wahab was handed a World Cup call-up after two years in the ODI wilderness, but the left-arm quick showed why the selectors put their faith in him.

Wahab generated playing of pace and bowled with great variety, getting Jonny Bairstow caught behind for 32 when he was looking dangerous early in the run chase.

He was on a hat-trick after seeing the back of an out-of-sorts Moeen and Woakes, then caught Jofra Archer in the deep as England finished on 334-9 and Pakistan responded to their Windies drubbing like champions.