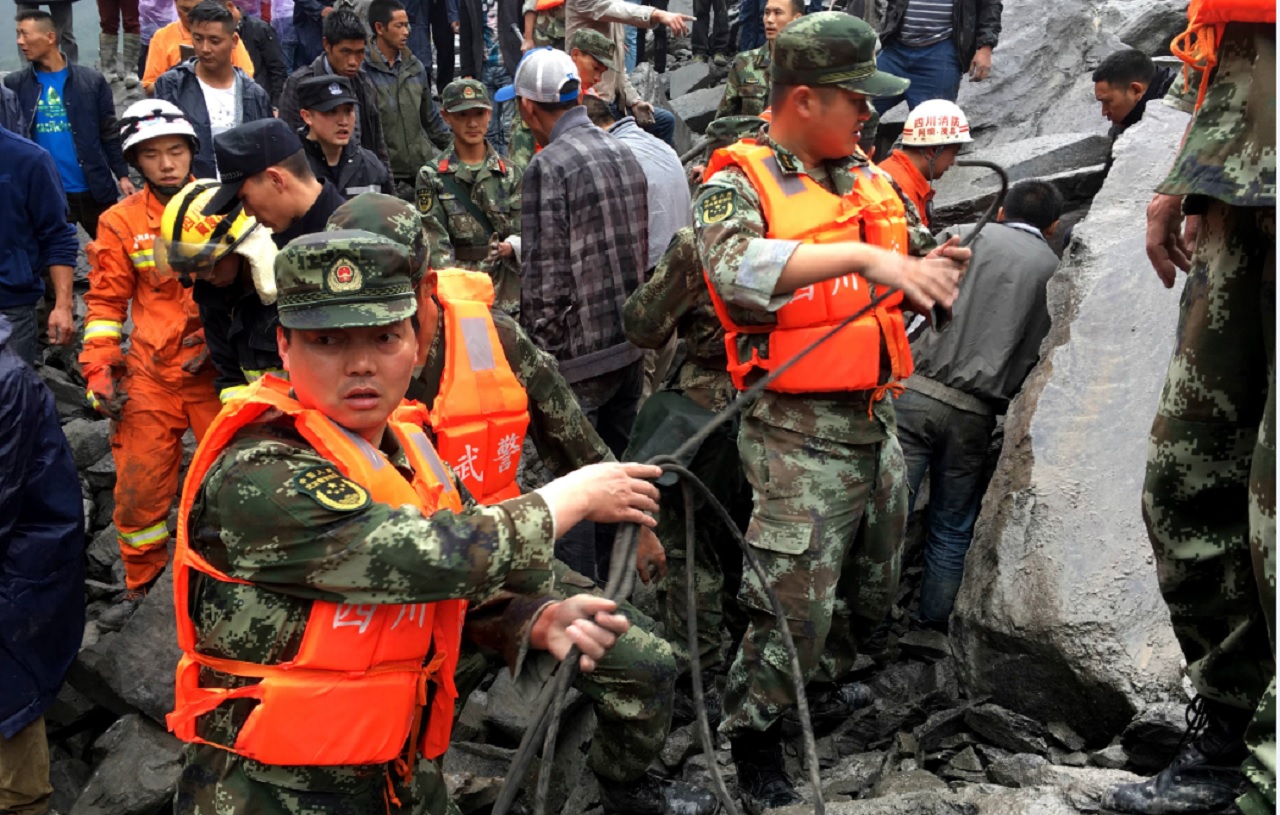 Emergency personnel work at the site of a massive landslide in Xinmo village in Maoxian County in southwestern China's Sichuan Province, Saturday, June 24, 2017.

More than 120 people were buried by a landslide that caused huge rocks and a mass of earth to come crashing into their homes in a mountain village in southwestern China early Saturday, officials said.

The landslide, which came from a mountain, engulfed a cluster of 62 homes and a hotel in the village of Xinmo in Mao County at about 6 a.m., the Sichuan provincial government said. Officials said 1.6 kilometers (1 mile) of road were buried in the disaster.

"It's the biggest landslide to hit this area since the Wenchuan earthquake," Wang Yongbo, an official leading one of the rescue efforts, told state broadcaster China Central Television. Wang was referring to China's deadliest earthquake this century, a magnitude 7.9 temblor that struck Sichuan province in May 2008, killing nearly 90,000 people.

The provincial government said more than 120 people were buried by the landslide. CCTV cited a rescuer as saying five bodies had been found.

Rescuers pulled out three people, two of whom had survived, the official Sichuan Daily newspaper said on its microblog. The paper also said a family of three, including a month-old baby, managed to escape just as the landslide started to hit their house. 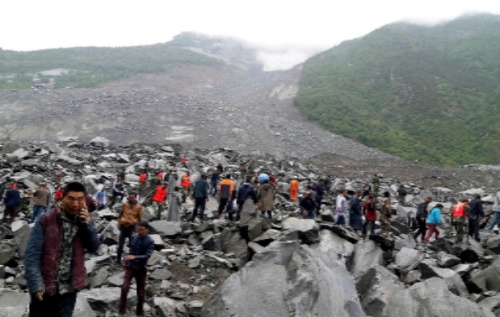 Emergency personnel and locals work at the site of a landslide in Xinmo village in Maoxian County in southwestern China's Sichuan Province, Saturday, June 24, 2017.

Qiao Dashuai told CCTV that the baby saved the family because he was woken up by the child's crying and was going to change the baby's diaper when he heard a noise that alerted him to the landslide.

"We heard a strange noise at the back of our house, and it was rather loud," Qiao said. "Wind was coming into the room so I wanted to close the door. When we came out, water flow swept us away instantly." He said they struggled against the flood of water until they met medical workers who took them to a hospital. Qiao said his parents and other relatives had not been found.

Mao County, or Maoxian, sits on the eastern margin of the Tibetan plateau and is home to about 110,000 people, according to the government's website. Most residents are of the Qiang ethnic minority. The village is known locally for tourism, and Chinese reports said it was unclear if tourists were among those buried by the landslide.

The landslide blocked a 2-kilometer (1.2-mile) section of a river. The provincial government said on its website that an estimated 8 million cubic meters (282 million cubic feet) of earth and rock — equivalent to more than 3,000 Olympic-sized swimming pools — had slid down the mountain.

Experts told CCTV that the landslide was likely triggered by rain. A meteorologist interviewed by CCTV said there was light rain in the area that would continue for a few days.

The Sichuan Daily said rescuers made contact with a villager buried under the rubble who answered her cellphone when they called and burst into tears. The woman was in the bedroom of her home when the landslide hit the village, and rescuers were trying to reach her, the report said.

Search and rescue efforts were underway involving more than 400 workers, including police. CCTV showed footage of rescuers in bright orange uniforms using earth movers and excavators but also relying on ropes to pull at huge rocks and shovels to dig up the dirt.