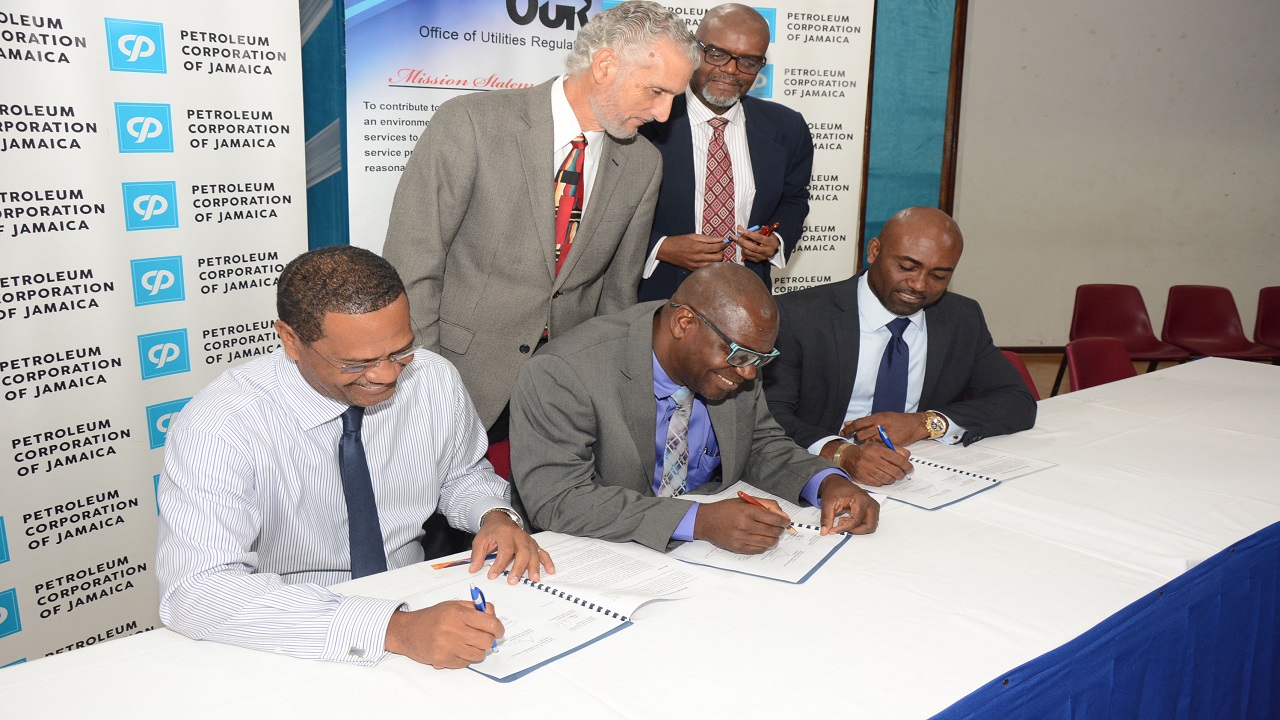 (Seated from left to right) Group General Manager of the PCJ, Winston Watson, Director General of the OUR, Ansord Hewitt and Minister of Science, Energy and Technology, Dr Andrew Wheatley, signing a MOU to cement the partnership between the OUR and the PCJ for the first staging of the Jamaica Natural Gas Conference scheduled for October 4-6, 2017 at the Jamaica Pegasus hotel in Kingston.

The Office of Utilities Regulation (OUR) and the Petroleum Corporation of Jamaica (PCJ) on Tuesday signed a Memorandum of Understanding (MOU), establishing a partnership to host Jamaica’s inaugural natural gas conference slated for October 4 - 6, 2017 at the Jamaica Pegasus hotel in Kingston.

The primary objective of the conference, which is being staged under the theme, “New Horizons: The Development of a Natural Gas Sector in Jamaica – Prospects and Challenges”, is to explore the economic, commercial, legal and regulatory implications of the development of the local natural gas industry, the PCJ said in a news release.

The event’s agenda will include a two-day seminar featuring presentations and panel discussions from key players in the regional and international gas industry; as well as representatives from financial, academic, statutory and regulatory institutions.

Participants will gain a better understanding of the opportunities, changes and benefits that should result from the introduction of natural gas into Jamaica’s energy mix, the PCJ said, noting that the target audience includes organisations and individuals involved in several industries including energy, finance, insurance, transportation and law as well as other sectors.

The agenda is also expected to be of interest to several public sector bodies including the Ministries of Energy, Finance, Transport, Industry and Commerce, Economic Growth and Job Creation, as well as Agencies such as Tax Administration Jamaica, Port Authority of Jamaica, and Jamaica Promotions Corporation (JAMPRO).

The final day of the conference will involve a tour of two Montego Bay based energy facilities: the Bogue Power Station operated by the Jamaica Public Service Company and New Fortress Energy’s storage and regasification site.

Addressing the signing ceremony, Minister of Science, Energy & Technology, Dr Andrew Wheatley said, “The introduction of natural gas to the Jamaican market has been a major step in the Government’s plans to modernize the country’s energy landscape and there will be numerous opportunities and positive spin-offs for several sectors. The Jamaica Gas Conference will help to build greater awareness now, in the important early stages, so we can prepare ourselves to take full advantage of financial, environmental and social benefits we anticipate this new industry will bring.”

The PCJ’s Group General Manager, Winston Watson, who also spoke at the ceremony, said “Our objective in staging this conference is to explore the ways in which public and private sector entities can work together to fully develop this new industry which has the potential to strengthen energy security and lower our country’s energy costs.”

For his part, Director General of the OUR, Ansord Hewitt said, “We hope that the conference will serve to educate the public generally about this nascent industry and to alert all actual and potential stakeholders such as government entities, investors, financiers, professionals, consumers, the media and regulators about the prospects that beckon with the foray into Natural Gas.”

PCJ back as title sponsor of Jamaica Alternative Energy Expo