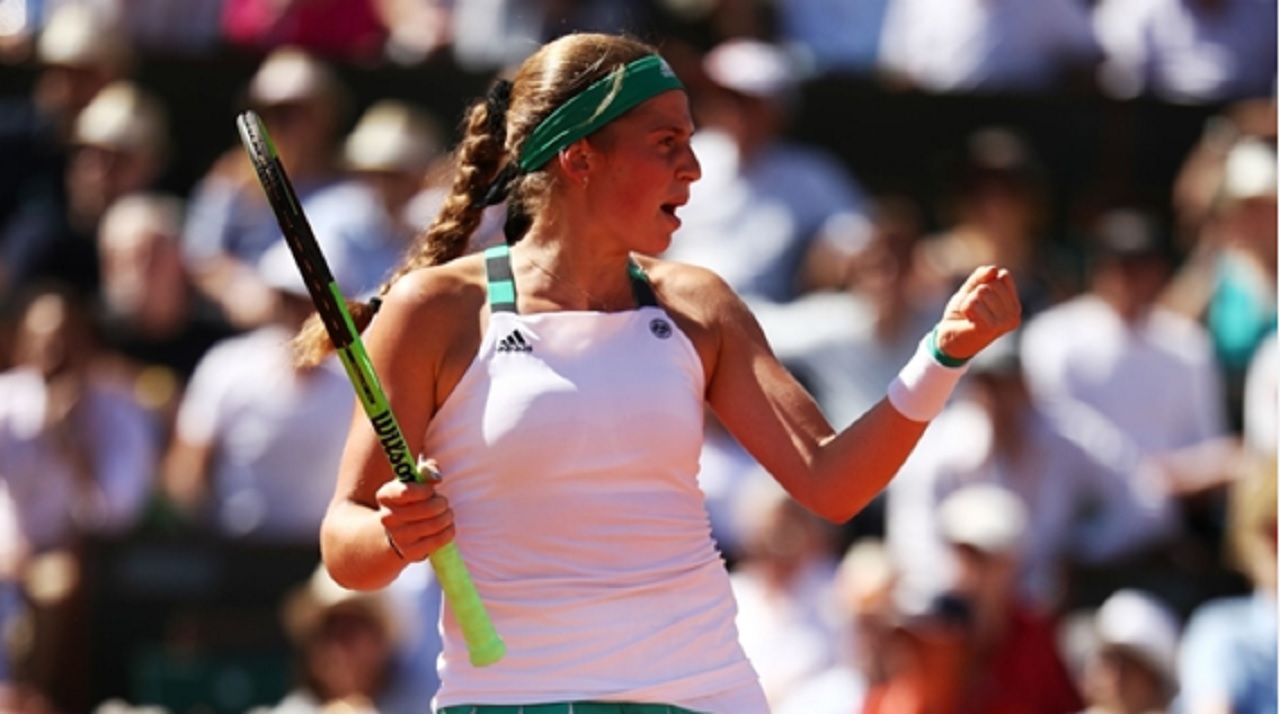 The unseeded Latvian had never before been beyond the third round at a grand slam but she showed maturity beyond her 20 years to keep her cool in roasting conditions in Paris, even when facing three break points at 6-4 3-0 down.

Ostapenko roared back in that second set, winning six of the next seven games and maintained that momentum in the decider as Halep was consigned to her second Roland Garros final defeat in four years, following her loss to Maria Sharapova in 2014.

By contrast Ostapenko - a three-time runner-up on the WTA Tour - became the first player to win her maiden trophy at a grand slam since Gustavo Kuerten in Paris on the day Ostapenko was born in 1997.

The world number 47 had come from behind to win three times in her remarkable run to the final and she climbed the proverbial mountain again when it mattered most in front of Court Philippe Chatrier crowd that lapped up every second.

The match represented a stark contrast in styles, pitting Halep's stoic defence against the gung-ho approach of her raw opponent, who drew gasps of astonishment from the spectators with the ferocity of her groundstrokes en route to the most stunning of slam successes.

Ostapenko - who had never won a match at Roland Garros before 2017 - vowed in Friday's news conference that she would stick with the attacking approach that has served her so well and she proved good to her word in the first game, breaking to love in stunning fashion with a series of backhand winners.

Halep was unbowed, though, and hit back instantly as Ostapenko thrashed a forehand into the tramlines having already saved two break points, the Romanian holding to love to consolidate.

Some further fearsome hitting earned Ostapenko a second break for 3-2 but once again she failed to press home her advantage as a litany of unforced errors saw Halep respond to love.

Halep's gutsy hold for 4-3 elicited the first signs of frustrations from Ostapenko, whose mood was not improved as a pair of wayward forehands three games later relinquished the first set.

Halep rescued three break points at the start of the second and things began to unravel for Ostapenko as she sent a forehand wide to fall further behind.

Ostapenko's unforced errors were starting to outweigh her winners but it was her turn to save three break points and get herself on the board in the next and the Chatrier crowd, enthralled by the entertainment before them, were delighted to see the Latvian get proceedings back on serve at 3-2.

A further courageous hold prompted another roar from the galleries, bettered only by the one that greeted Ostapenko's forehand volley to break for 4-3.

She again failed to consolidate but Halep, perhaps feeling the pressure, dropped serve to love and Ostapenko picked an ideal time to produce her first emphatic hold of the set, sealed with a fizzing forehand down the line.

Ostapenko went long to hand Halep the momentum and a 3-1 lead in the third but still the youngster refused to relent and redeemed herself with a forehand return winner right on the line to hit back immediately.

A huge slice of luck went Ostapenko's way at a crucial juncture in game seven as a backhand up the line thumped into the net cord and dropped on Halep's side to seal a break in the most fortuitous circumstances.

And victory was secured in fitting fashion, a rasping double-handed backhand winner down the line rendering Halep motionless while Ostapenko was left to soak up the adulation of the crowd following a stunning triumph.