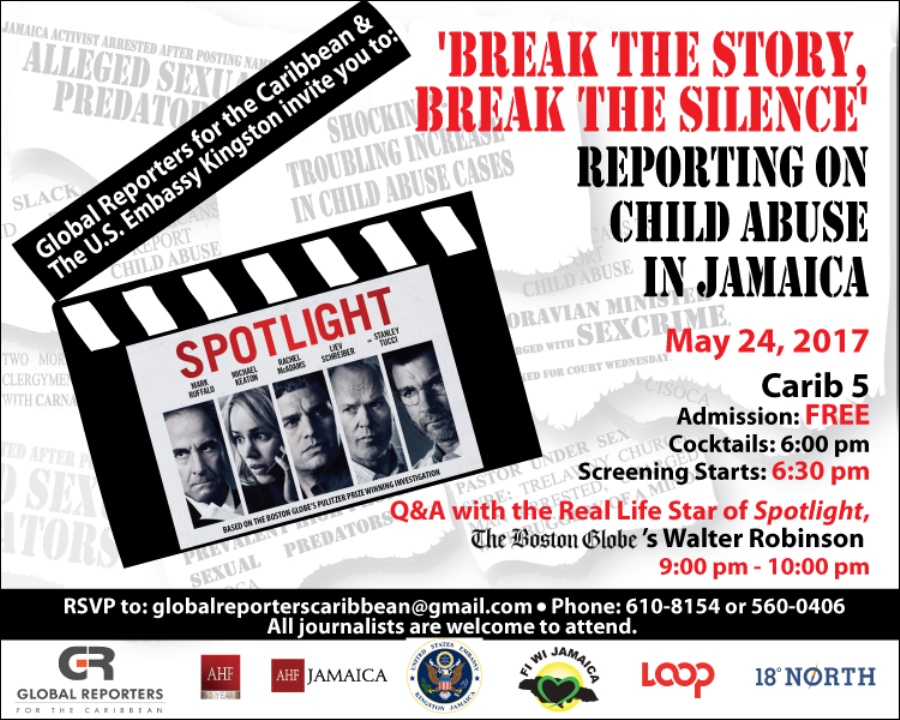 Global Reporters for the Caribbean, producers of the investigative show, 18 Degrees North, in partnership with the Embassy of the United States of America and AIDS Healthcare Foundation will screen the Oscar-winning film 'Spotlight' at Carib 5 in Kingston on Wednesday, May 24th at 6:30p.m.

The screening will target journalists, members of civil society, government agencies, church leaders, parents and those charged with the responsibility to care for and protect the island’s children.

Since the start of 2017, Jamaica has been ignited with a flurry of conversation around child abuse.  In April, the Office of the Children’s Registry (OCR) stated that close to 70,000 cases of child abuse have been reported in Jamaica since 2007.  In 2015 alone, 13,948 reports were received.

Against this local backdrop, we will screen the Oscar-winning film Spotlight, the true life story of how the Boston Globe investigated child sexual abuse in the Catholic Church. Walter Robinson, the Boston Globe's real life editor of the Spotlight investigative team at the time of this probe, will be our guest. With a question-and-answer session after the film, Robinson will help us to develop our thinking and fine-tune our skills when it comes to investigating and reporting on child sexual abuse.

Being from Boston, a big city with a small-town feel, Robinson will help us to understand how he navigated some of the pressures he felt to protect institutions he had been part of and how to get information from friends who were also involved with legally representing institutions accused of trying to brush child sexual abuse cases under the rug.   We’ll also go over what’s different about reporting on child abuse from other stories; how to treat victims, family members, perpetrators, those accused and those that protect abusers, even family members; and how as a journalist, to understand what’s true from untrue in what can sometimes be a maze of he-said, she-said stories

The objective of Global Reporters for the Caribbean and its partners (including FiWi Jamaica and LoopNews) is to raise the bar on investigative journalism in Jamaica. Together we will empower Jamaican journalists to challenge societal norms of self-censorship and surface reporting, to produce truly independent, thought-provoking pieces that have impact. We believe that by arming journalists with the right tools, we will see more investigative pieces and therefore see an increase in accountability. This we hope will drive the movement forward to stamp out corruption and other social ills in our society.