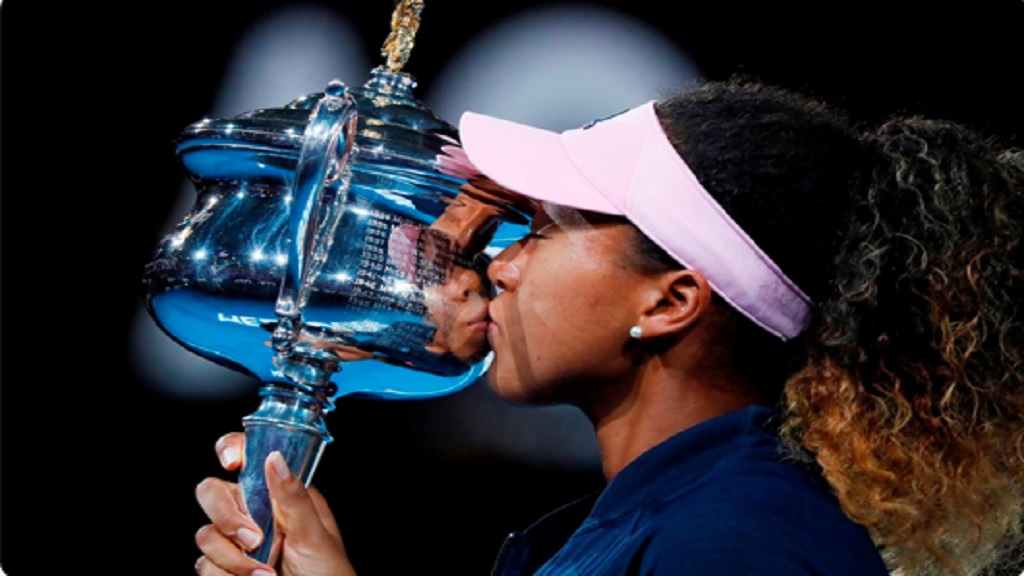 Japan's Naomi Osaka kisses her trophy after defeating Petra Kvitova of the Czech Republic during the women's singles final at the Australian Open tennis championships in Melbourne, Australia, Saturday, Jan. 26, 2019.

So close to victory, Naomi Osaka suddenly was letting the Australian Open final slip away. Three championship points? Gone. A sizable lead? Soon all gone, too.

She was playing poorly. She yelled at herself. Slammed a ball. Tugged at her visor's pink brim. Trudged to the locker room between sets with a towel draped over her head.

And then, after returning to the court, Osaka turned it all around just as quickly as she had dropped 23 of 27 points. Regrouping and reasserting herself, Osaka edged Petra Kvitova 7-6 (2), 5-7, 6-4 on Saturday night to win the Australian Open for a second consecutive Grand Slam title.

On top of that, Osaka will rise to No. 1 in the rankings.

Osaka held three match points in the second set at 5-3, love-40 as Kvitova served. But Osaka couldn't close it out. Instead, she completely lost her way.

That allowed Kvitova to come back and make a match of it, reeling off five games in a row to take the second set and go up 1-0 in the third.

Hard as it must have been, Osaka recovered. She also got her powerful shots going again. After Kvitova double-faulted to offer up a break point at 1-all, Osaka converted it with a cross-court backhand winner. There was still more work to be done, of course, and some additional drama when it began raining at the changeover right before Osaka tried to serve for the match at 5-4 in the third set.

This time, Osaka would not falter. She would not let this lead disappear.

Osaka added the Australian Open trophy to the one she collected in a U.S. Open final last September that forever will be remembered for the way runner-up Serena Williams was docked a game after arguing with the chair umpire.

Unlike that day, there was no jeering from the confused crowd. No controversy. No chaos. No sharing the spotlight.

Clearly marking herself as tennis' bright new star, Osaka is the first woman to win two major championships in a row since Williams picked up four straight in 2014-15.

Osaka was born in Japan — her mother is Japanese, her father is Haitian — and she moved to New York at age 3. Now she's based in Florida and has dual citizenship. Osaka already was the first player representing Japan — female or male — to win a Grand Slam singles title. Now she also is the first to top the WTA or ATP rankings.

At 21, Osaka is the youngest No. 1 in nearly a decade; Caroline Wozniacki was 20 when she first ascended to that spot in 2010.

And to think, a year ago, Osaka was ranked 72nd.

What a climb. What a quick climb.

Kvitova was playing in her first Grand Slam final since winning Wimbledon five years ago — and the first since she was stabbed in the hand by an intruder at her home in the Czech Republic a little more than two years ago.

"You've been through so much," Osaka told Kvitova during the trophy ceremony. "I'm really honored to have played you in the final of a Grand Slam."

On a somewhat cloudy, rather comfortable evening, with only a slight breeze and the temperature around 75 degrees (25 Celsius), both women hit the ball as hard as can be. Exchanges were mostly at the baseline and filled with flat, powerful groundstrokes that barely cleared the net and made retrieving and replying as much about reflexes as anything.

Here's one measure of how even it was: Each finished with 33 winners.

Points were swift and blunt; of 86 in the first set, only four lasted nine strokes or more. There was plenty of strong serving, clean hitting and good movement.

It was Osaka who was the first to get ahead, tearing through the tiebreaker by grabbing five points in a row — four via winners — to go up 5-1. When Kvitova sailed a backhand wide moments later, ceding a set for the first time all tournament, Osaka pumped her fist and screamed, "Come on!"

How pivotal was that moment? Kvitova had won her last 22 Grand Slam matches after winning the first set. Osaka, meanwhile, entered the day having won 59 matches anywhere after going up by a set.

When Osaka broke to lead 3-2 in the second set, and then got to 5-3, the outcome seemed to be a foregone conclusion. Turned out, that wasn't the case. Not at all.

Serena said she was proud of me – Osaka