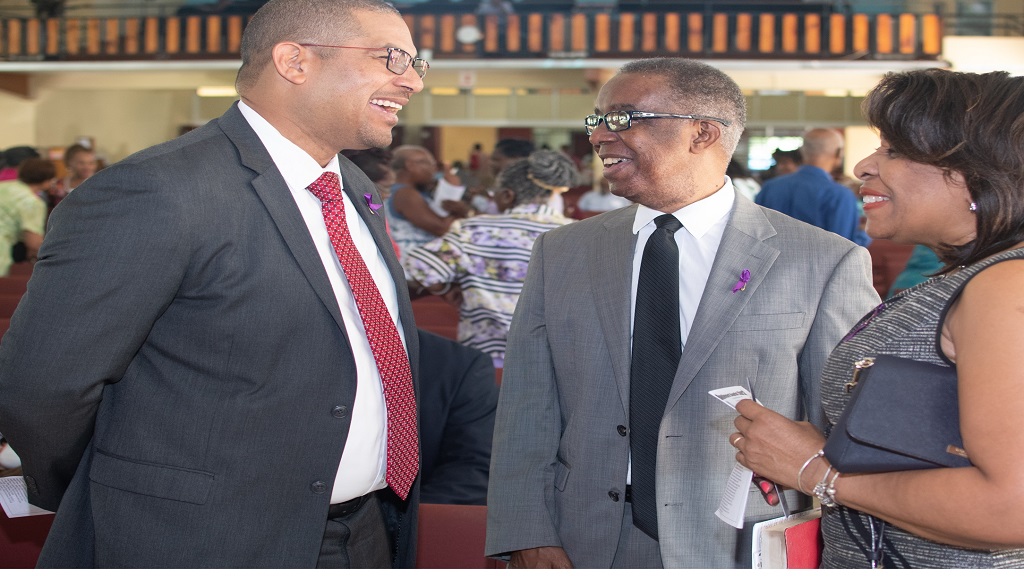 Mikhail Phillips (left) Opposition Spokesperson on Transport and Works makes a point to Dr. Lucien Jones, Vice-Chairman/Convenor of the National Road Safety Council (NRSC) and Paula Fletcher, Executive Director, NRSC at the church service in commemoration of World Day of Remembrance for Road Traffic Victims (WDR) which was held at Boulevard Baptist Church.

The National Road Safety Council (NRSC) has lauded the recent efforts of the government in introducing new measures aimed at tackling the increase in road crash fatalities, through the passage of the new Road Traffic Act 2018 last week Tuesday in the House of Representatives. The 2018 Act also repeals the Road Traffic Act of 1938 and needs to be approved by the Senate and given the Governor General's assent before it takes effect.

The comments came from the NRSC on Sunday at the church service in commemoration of World Day of Remembrance (WDR) for Road Traffic Victims, which was held at the Boulevard Baptist Church in Kingston.

As at November 20 of this year, the Public Safety and Traffic Enforcement Branch (PSTEB) of the Jamaica Constabulary Force has reported that a total of 316 Jamaicans have been killed in 279 crashes. These numbers compare with 286 fatalities from 261 crashes for the same period in 2017.

The Road Traffic Act 2018 will create several new provisions that are best practices for reducing road crashes and are designed to take road safety to a higher level while also providing stiffer penalties for breaches.

Dr. Lucien Jones, Vice-Chairman and Convener of the NRSC, indicated, “It’s important to note that the year has not yet ended and there has already been an eight per cent increase in fatalities on the road. So, we hope that the provisions of the new law will significantly contribute to the reduction of annual fatalities and injuries.”

Dr. Jones continued, “Though there is still work to be done in finalising the Regulations of the Act, this is a big win for road safety promotion, especially as we commemorate World Day of Remembrance (WDR) for Road Traffic Victims.”

WDR was commemorated globally and the theme for 2018 is ‘Roads Have Stories’, based on Pillar 2 - Safer Roads of its ‘Global Plan for the Decade of Action for Road Safety 2011-2020’. In addition to remembering those killed and injured in road crashes, as well as their families and communities, it also aims to raise awareness of the need for safe road networks for the benefit of all road users through infrastructure assessments and improved planning, design, construction and operation of roads.

In reference to the increase in road crash victims this year, the Most Honourable Prime Minister, Andrew Holness, who chairs the NRSC, said in his message for WRD: “On this trajectory, unfortunately Jamaica may surpass the end of year figure for 2017. This is certainly no comfort for the government, as we have been working to find innovative methods to address responsible road usage.”

Prime Minister Holness noted that international agencies have estimated that the cost of road crashes can wipe out up to five per cent of the gross domestic product of some developing countries every year. He said, “As such, the problem is not only a major issue for individual families but is also of immense importance to our economy.”

NRSC Executive Director Paula Fletcher added that WRD for Road Traffic Victims has become an important event to help remember those affected by traffic crashes and also to help to refocus on taking better care on the roads through personal responsibility for safety by obeying the rules of the road. “We hope that WDR will this year bring even more awareness in Jamaica and that we will strive to make road safety a way of life."