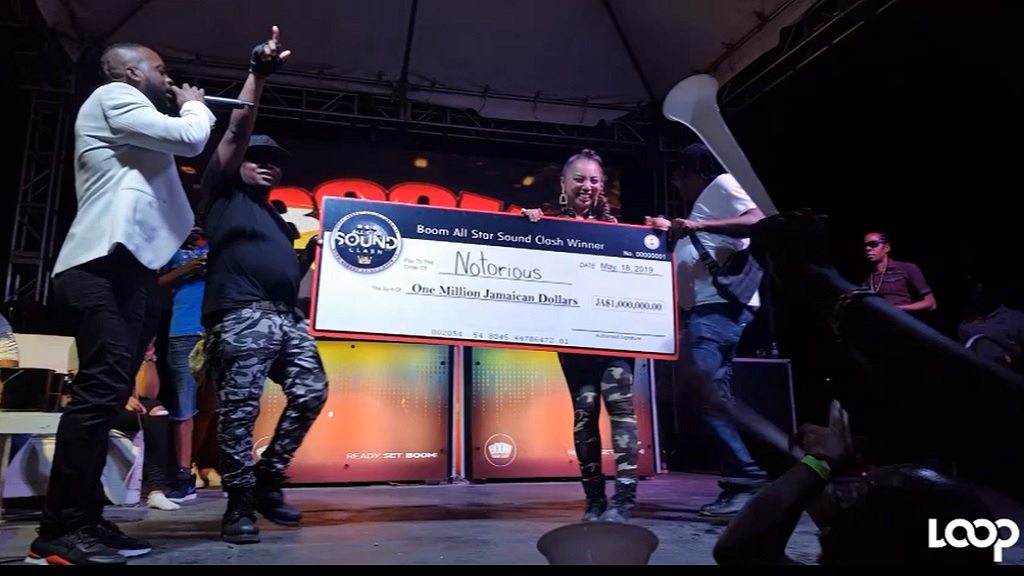 Likkle Shabba and Marie pose with the winning symbolic cheque following their victory in the Boom All-Star Sound Clash.

Notorious International Sound was crowned champions of the Boom All-Star Sound Clash at Mass Camp in St Andrew on Saturday, after easily downsizing the force of Hurricane Sound System, to win the J$1 million prize.

Hurricane’s resistance was nonexistent, as all four judges awarded the six rounds of the contest to Notorious, whose selectors Marie and Likkle Shabba outperformed counterparts Jah B and TG Gangster all night.

From the outset, Notorious showed superiority. During the first round, when both sound systems got 30 minutes to play, it drew on a wide selection of dubplates that included Stephen Marley’s ‘Options’ and left the crowd on a high.

Hurricane stared their set slowly and that left them fighting to re-energize the crowd, which only responded favourably to a dub featuring Vybz Kartel and Vanessa Bling's ‘Stop Gwaan Like Yuh Tuff’, which TG Gangster dedicated to Likkle Shabba.

That was TG Gangster’s best moment of the night, as Notorious moved the standard higher in the second round, which had both sound systems playing five tunes each.

Likkle Shabba had the crowd his way from his entry on stage, decked out in full military garb. He showed lyrical superiority over TG Gangster before having Marie unleashing Notorious’ five tunes, all dubplates.

Hurricane again failed to keep pace in the third round when both sound systems were required to play five collaborations.

With police starting to hover around the venue and interrupting the clash on several occasions, time became essential and both sound systems had to quicken their selections for the next three rounds.

Round four was for singers and Notorious pulled two Beres Hammond songs and one each from Romain Virgo, Chronixx and Stephen Marley that wiped out the selections of Hurricane.

Round five was the challenge round in which each sound system countered five songs from the other, with round seven having them play seven songs.