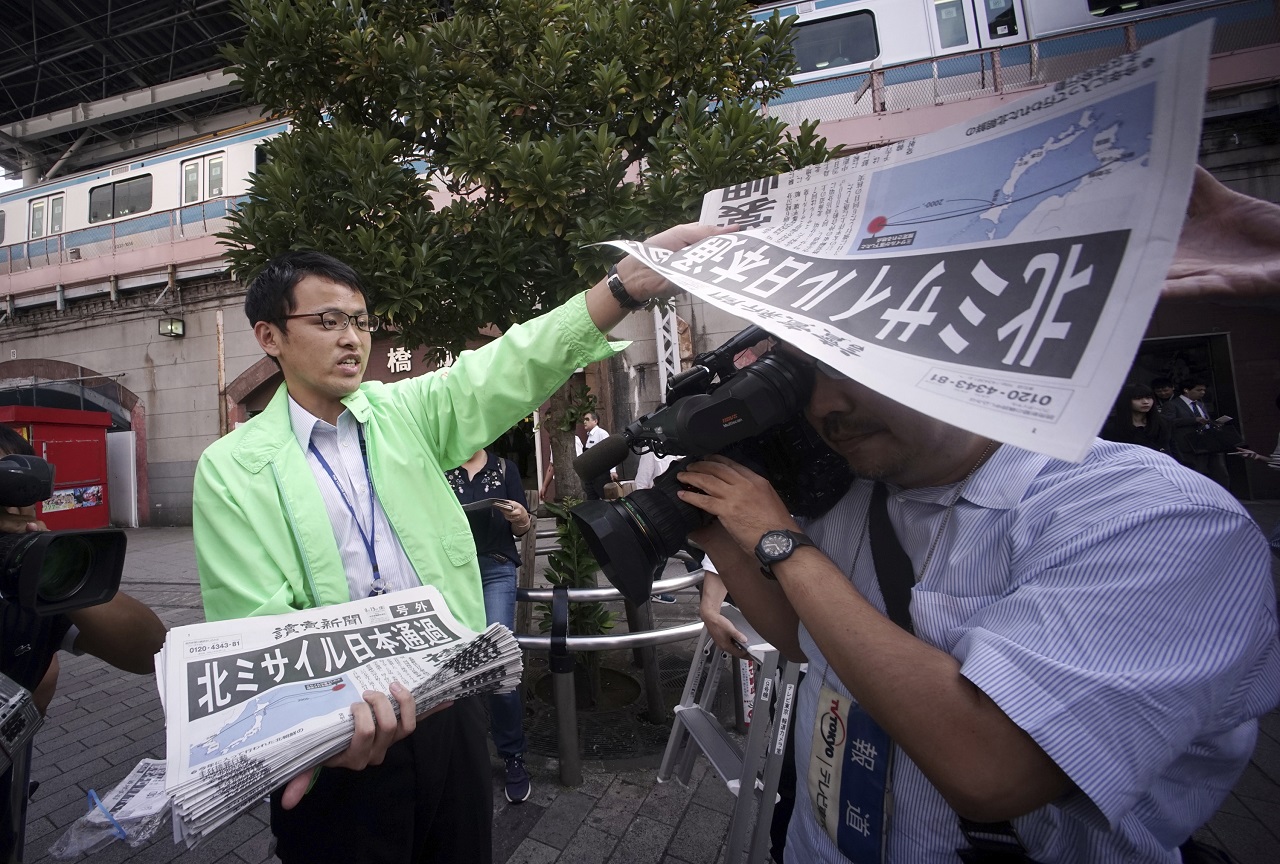 A man distributes an extra edition of a newspaper reporting about North Korea's missile launch, at Shimbashi Station in Tokyo, Friday, Sept. 15, 2017.

North Korea fired an intermediate-range missile over Japan into the northern Pacific Ocean on Friday, U.S. and South Korean militaries said, its longest-ever such flight and a clear message of defiance to its rivals.

Since President Donald Trump threatened the North with "fire and fury" in August, Pyongyang has conducted its most powerful nuclear test and launched two missiles of increasing range over U.S. ally Japan. It tested its first-ever intercontinental ballistic missiles in July.

The growing frequency, power and confidence displayed by these tests seems to confirm what governments and outside experts have long feared: North Korea is closer than ever to its goal of building a military arsenal that can viably target both U.S. troops in Asia and the U.S. homeland. This, in turn, is meant to allow North Korea greater military freedom in the region by raising doubts in Seoul and Tokyo that Washington would risk the annihilation of a U.S. city to protect its Asian allies.

North Korea has repeatedly vowed to continue these tests amid what it calls U.S. hostility — by which it means the presence of tens of thousands of U.S. troops in Japan and South Korea.

Robust diplomacy on the issue has been stalled for years, and there's little sign that senior officials from Pyongyang and Washington might sit down to discuss ways to slow the North's determined march toward inclusion among the world's nuclear weapons powers.

Friday's missile, which triggered sirens and warning messages in northern Japan but caused no apparent damage to aircraft or ships, was the second fired over Japan in less than a month. North Korea conducted its sixth and most powerful nuclear test on Sept. 3.

The missile was launched from Sunan, Pyongyang's international airport and the origin of the earlier missile that flew over Japan. Analysts have speculated the new test was of the same intermediate-range missile launched in that earlier flight, the Hwasong-12.

That missile is linked to North Korea's declaration that it means to contain the U.S. Pacific island territory of Guam, which is the home of important U.S. military assets and appears well within the Hwasong-12's range.

The North American Aerospace Defense Command and the U.S. Pacific Command said the missile posed no threat to North America or to Guam.

South Korean experts have said North Korea wants to make missiles flying over Japan an accepted norm as it seeks to win more military space in a region dominated by its enemies.

North Korea initially flight-tested the Hwasong-12 and the ICBM model Hwasong-14 at highly lofted angles to reduce their range and avoid neighboring countries.

The two launches over Japan indicate North Korea is moving toward using angles close to operational to determine whether its warheads can survive the harsh conditions of atmospheric re-entry and detonate properly.

North Korea has been accelerating its nuclear weapons development under leader Kim Jong Un, a third-generation dictator who has conducted four of North Korea's six nuclear tests since taking power in 2011. The weapons are being tested at a torrid pace and include solid-fuel missiles designed to be launched from road mobile launchers or submarines and are thus less detectable beforehand.

North Korea claimed its latest nuclear test was a detonation of a thermonuclear weapon built for its ICBMs, which could potentially reach deep into the U.S. mainland when perfected.

Trump says 'talking is not the answer' with North Korea

UN Security Council weighs what to do next on North Korea