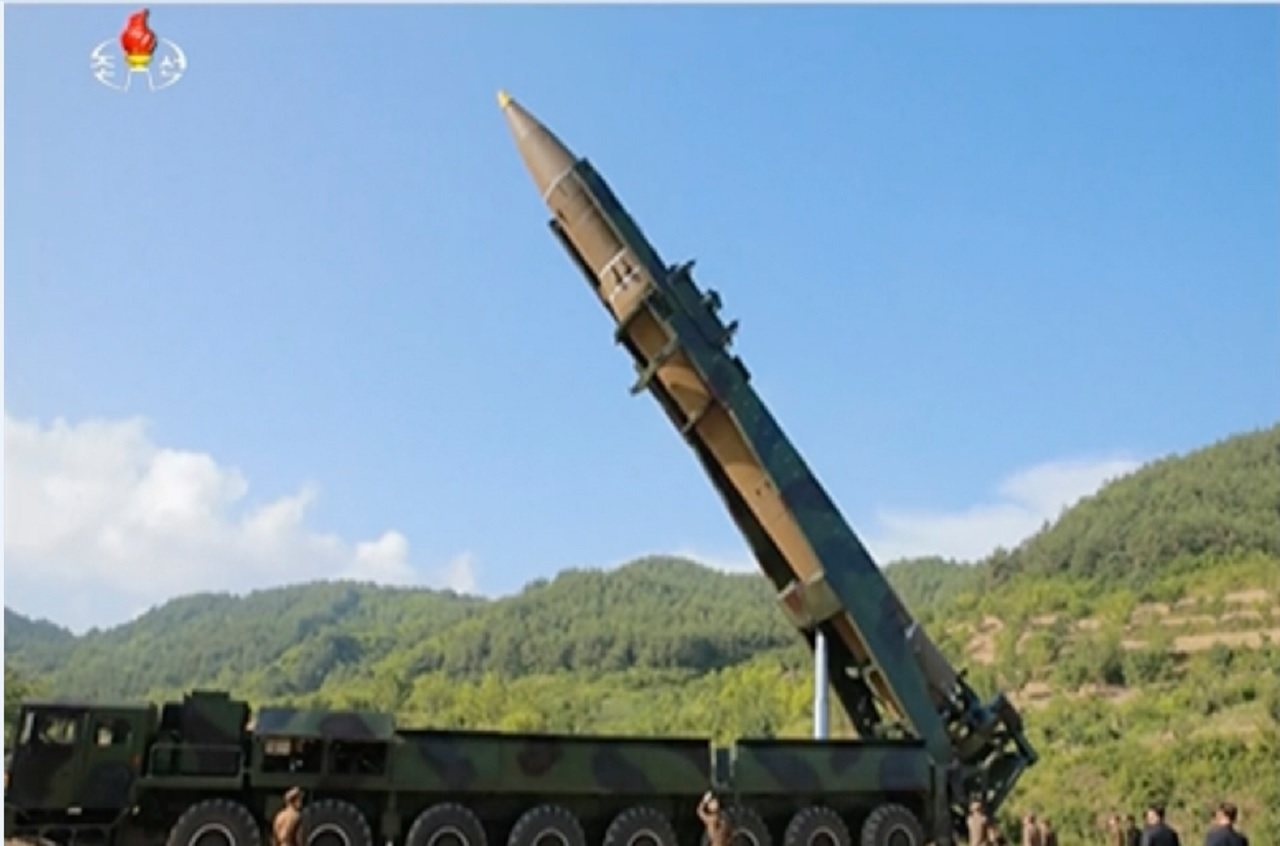 This image made from video of a news bulletin aired by North Korea's KRT on Tuesday, July 4, 2017, shows what was said to be the preparation of the launch of a Hwasong-14 intercontinental ballistic missile, ICBM, in North Korea's northwest.

It is a potential game-changing development in what may be the world's most dangerous nuclear standoff and, if true, a direct rebuke to U.S. President Donald Trump's earlier declaration that such a test "won't happen!"

The launch appeared to be North Korea's most successful missile test yet. A U.S. scientist examining the height and distance said the missile could potentially be powerful enough to reach Alaska.

In typically heated rhetoric, North Korea's Academy of Defense Science said the test of an ICBM — the Hwasong-14 — marked the "final step" in creating a "confident and powerful nuclear state that can strike anywhere on Earth."

It will be difficult to confirm many details about what happened. North Korea's weapons program is perhaps the most closely held state secret in one of the world's most suspicious nations. U.S., South Korean and Japanese officials earlier assessed that the North fired an intermediate-range missile into waters near Japan.

Japanese Chief Cabinet Secretary Yoshihide Suga declined to comment on whether Japan thinks it was an ICBM, and South Korea's Defense Ministry said it was analyzing whether the North's statement was accurate.

North Korea has previously launched satellites in what critics said were disguised tests of its long-range missile technology. A test-launch of an ICBM, however, would be a major step in developing nuclear-armed missiles that could reach anywhere in the United States.

The launch sends a political warning to Washington and its chief Asian allies, Seoul and Tokyo, while also allowing North Korean scientists a chance to perfect their still-incomplete nuclear missile program. It came on the eve of the U.S. Independence Day holiday, days after the first face-to-face meeting of the leaders of South Korea and the United States, and ahead of a global summit of the world's richest economies.

Most outside and North Korean analyses of the missile's height, distance and time in the air were roughly similar.

U.S., South Korean and Japanese officials say it flew for about 40 minutes and reached an altitude of 2,500 kilometers (1,500 miles), which would be longer and higher than any similar North Korean test previously reported. It also covered a distance of about 930 kilometers (580 miles).

Russia's military, however, said the missile flew considerably shorter and lower than others reported.

Before North Korea's announcement of an ICBM, South Korean analysts said it was likely that it was a retest of one of two intermediate-range missiles launched earlier this year.

One U.S. missile scientist, David Wright, estimated that the highly lofted missile, if the reported time and distance are correct, could have a possible maximum range of 6,700 kilometers (4,160 miles), which could put Alaska in its range, if fired at a normal trajectory.

Hamish de Bretton-Gordon, a former commanding officer of the British Armed Forces Joint Chemical Biological Radiological Nuclear Regiment, said that "in capability of missile terms and delivery, it is a major step up and they seem to be making progress week-on-week." He added, however, that "actually marrying the warhead to the missile is probably the biggest challenge, which they appear not to have progressed on."

North Korea has a reliable arsenal of shorter-range missiles and is thought to have a small arsenal of atomic bombs, but is still trying to perfect its longer-range missiles. Some outside civilian experts believe the North has the technology to mount warheads on shorter-range Rodong and Scud missiles that can strike South Korea and Japan, two key U.S. allies where about 80,000 American troops are stationed. But it's unclear if it has mastered the technology needed to build an atomic bomb that can fit on a long-range missile.

Soon after the morning launch, President Trump responded on Twitter: "North Korea has just launched another missile. Does this guy have anything better to do with his life? Hard to believe that South Korea and Japan will put up with this much longer. Perhaps China will put a heavy move on North Korea and end this nonsense once and for all!"

"This guy" presumably refers to North Korean leader Kim Jong Un. China is North Korea's economic lifeline and only major ally, and the Trump administration is pushing Beijing to do more to push the North toward disarmament.

After North Korea claimed earlier this year it was close to an ICBM test launch, Trump took to Twitter and said, "It won't happen!"

China and Russia proposed on Tuesday that North Korea declare a moratorium on nuclear and missile tests while the United States and South Korea refrain from large-scale joint military exercises. North Korea views the exercises as preparation for an invasion and has repeatedly demanded their cancellation. It says it needs nuclear weapons and powerful missiles to cope with what it calls rising U.S. military threats.

The Chinese and Russian foreign ministries issued the proposal in a joint statement after talks between Chinese President Xi Jinping and Russian President Vladimir Putin.

They urged other nations to create a "peaceful atmosphere of mutual trust" to encourage talks between the two sides on commitments not to use force and to make the Korean Peninsula free of nuclear weapons.

Regional disarmament talks on North Korea's nuclear program have been deadlocked since 2009, when the North pulled out of the negotiations to protest international condemnation over a long-range rocket launch.

The missile test could invite a new round of international sanctions, but North Korea is already one of the most sanctioned countries on Earth. U.N. Security Council resolutions ban it from engaging in any ballistic activities. Since late 2012, North Korea has placed two satellites into orbit with long-range rockets, each time triggering new U.N. sanctions and worldwide condemnation.

Last year, North Korea conducted its fourth and fifth atomic bomb tests and claimed a series of technical breakthroughs in its efforts to develop long-range nuclear missiles. The fifth nuclear test in September was the North's most powerful atomic detonation to date.

Abe, who talked by phone with Trump on Monday, said the two leaders plan to seek cooperation from world leaders when they attend a G-20 summit in Germany.

The Korean Peninsula has been divided since before the 1950-53 Korean War. Almost 30,000 U.S. troops are stationed in South Korea.