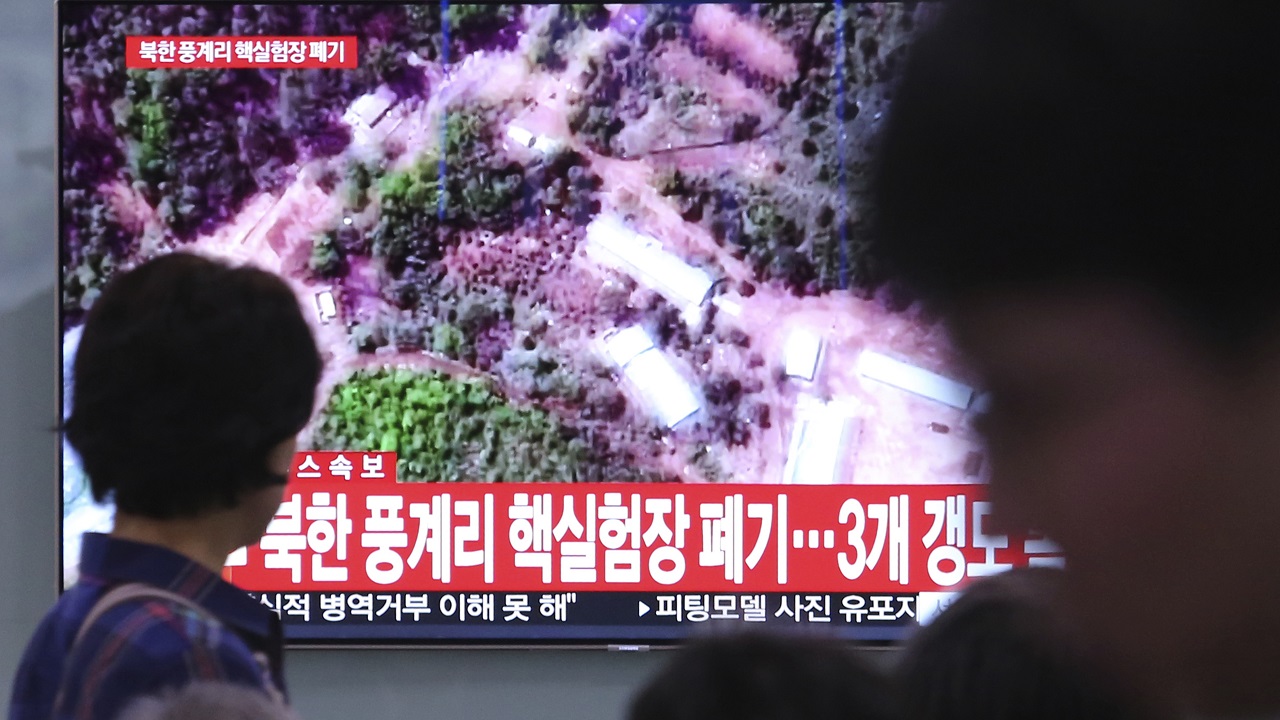 Just weeks ahead of a planned summit with US President Donald Trump, Kim Jong Un made good on his promise to demolish North Korea's nuclear test site, which was formally closed in a series of huge explosions on Thursday.

The explosions at the nuclear test site deep in the mountains were centred on three tunnels at the underground site and a number of buildings in the surrounding area.

North Korea held a closing ceremony afterwards with officials from its nuclear arms program in attendance. The group of international journalists that witnessed the demolition, which touched off landslides near the tunnel entrances and sent up clouds of smoke and dust, included an Associated Press Television crew.

North Korea's state media called the closure of the site part of a process to build "a nuclear-free, peaceful world" and "global nuclear disarmament".

Kim announced his plan to close the site, where North Korea has conducted all six of its underground nuclear tests, ahead of a summit with South Korea's President Moon Jae-in in April and the planned summit with Trump, which is scheduled to take place next month in Singapore.

But even as North Korea made good on its gesture of detente, it lobbed another verbal salvo at Washington, calling Vice-President Mike Pence a "political dummy" and saying it is just as ready to meet in a nuclear confrontation as at the negotiating table.

North Korea's decision to close the Punggye-ri nuclear test site has generally been seen as a welcome gesture by Kim to set a positive tone ahead of the summit. But the closing of the site is not an irreversible move and would need to be followed by many more significant measures to meet Trump's demand for real denuclearisation.

North Korea also did not invite international nuclear weapons inspectors, opting instead for the impact of the television footage to impress the world.

Back in Pyongyang, the outburst directed at Pence came on the heels of another sharp rebuke of Trump's newly appointed national security adviser, John Bolton, raising concerns that a major gap has opened between the two sides as the planned summit nears.

Choe Son Hui, a vice minister of foreign affairs, slammed "ignorant" and "stupid" comments Pence made in an interview with Fox News that compared nuclear-capable North Korea to Libya. Libya gave up its nuclear program at an early stage only to see its long-time dictator overthrown and brutally killed years later.

The summit plan has hit a number of speed bumps recently as both sides have begun trading barbs and taking tougher positions. Trump met South Korean President Moon on Tuesday at the White House for consultations and suggested the summit could be delayed or even called off entirely.