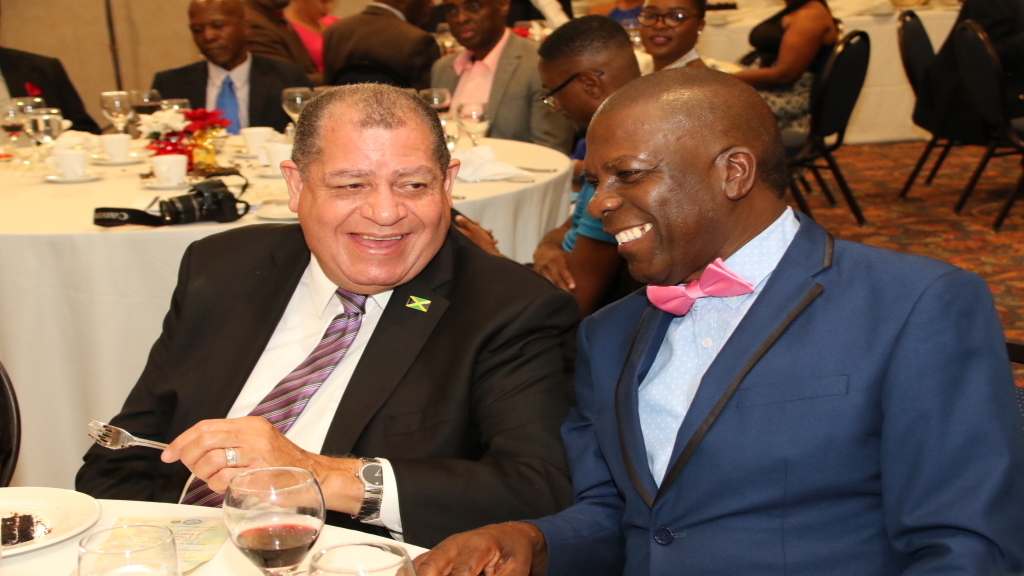 President of the Jamaica Coffee Exporters Association, Norman Grant shares a laugh with Minister of Industry, Commerce, Agriculture and Fisheries Audley Shaw at the annual banquet of the JCEA on Saturday, December 7.

Norman Grant, President of the Jamaica Coffee Exporters Association (JCEA) is calling for the development of a coffee industry stabilisation fund and a marketing fund based on a cess on imports.

This would provide support in times of price volatility as seen in recent times said Grant who spoke at the annual banquet of the JCEA on Saturday, December 7.

In his address, he called on the Jamaican government to allocate annually in the national budget for MICAF between $100 and $150 million to support the coffee farmers in both input and price support over the next five years until there is a total recovery in the market.

“This is important as the coffee sector of over 5,000 farmers supports over 102,000 farm rural families and now generates $15 million in export earnings down from the $25 million four years ago. With this kind of investment we could see export from this sector climb to over $50 million annually in five years,” Grant outlined.

In the most recent years, there has been significant volatility in the pricing of coffee due to demand/supply imbalances.

Most recently, there was a run-up in the export price of Jamaica Blue Mountain (JBM) Coffee, resulting in a 100 per cent increase in price between 2015 and 2017.

While Japanese importers took the volumes they had previously committed to, Japanese consumers shunned the 100 per cent increase in price and demand plummeted.

Importers were left holding over-priced stock that they could not sell, Grant outlined, and many incurred significant losses on the inventory they held. As a consequence, the JBM brand was affected negatively.

In response, the producers/traders in Jamaica had to accept reduced selling price from the market for coffee by approximately 50 per cent for importers to recoup some losses and also to re-kindle the demand from Japanese consumers, according to Grant.

The impact of this was a steep reduction in the cherry price to coffee farmers.

Grant outlined, “The impact was not immediate, as the Japanese importers had to off-load existing high priced inventory. However, that inventory is now finished and since early 2019, the export demand has slowly started to return. We are actually seeing a slow but steady recovery of prices to farmers as the market is now reordering.” 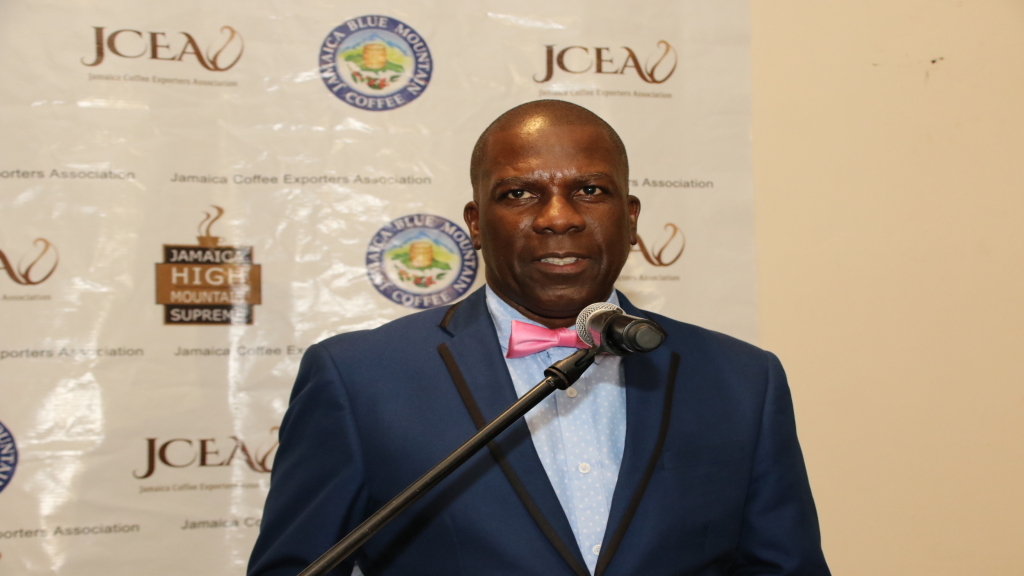 Grant called on the Jamaican government to allocate annually in the national budget for MICAF between $100 and $150 million to support the coffee farmers in both input and price support over the next five years.

The JCEA head said that the Japanese are now increasing their orders, but the current export price for green coffee –averaging US$26 per kg which is a drop from US$60 per kg when the weighted average price to the farmers was around $9,000 per box - is not at a level that will allow for a sustainable price to be paid to farmers.

Grant stated that export prices need to gradually increase by 23 to 25 per cent over the next few years to get to a point where it becomes sustainable for farmers to continue growing coffee.

In order to get there, he outlined, the JCEA will be working closely with the partners in Japan, US and Europe and of course the rest of the world to find not only the right price, but also the right pace of increase that works for the consumers, as well as for the Jamaican farmer/producer.

Marketing efforts of the JCEA, the association of Japanese importers and Jampro are geared towards this outcome.

The JCEA head said the coffee industry is currently producing approximately 200,000 boxes both non-blue mountain and JBM down from the 700,000 boxes produced or seven million pounds in 2003/2004.

Grant, meanwhile is also recommending that the Ministry of Industry, Commerce, Agriculture and Fisheries (MICAF) and the regulatory authority JACRA support the imposition of a cess on imported coffee.

He also stated, “every cent must be spent and supporting the farmers through input and price support as well as marketing and research and development. Not one cent should be spent on administrative expenses so we want an undertaken that this will be done.”

For those producers who are already paying a cess on imported green bean and on roasted coffee, he added, there should be net tax relief when charges for imported coffee is computed.

Grant outlined that imports are now necessary as the demand for the hospitality industry is 500,000 kg or 1.2 million pounds annually, with the last crop production of non-blue mountain [coffee] being less than 200,000 pounds.

JBM production is 1.7 million out of which 1.5 million pounds is exported.

“There is just simply not enough coffee and coffee takes five years to come into production. So we must import and use the cess the expand production.”

He outlined, “as we increase production we [can] revise the cess, or reduce the quantity imported or increase the blending requirement after full consultation with stakeholders.”

He also advocated for quicker turnaround time for the export/import permits, as what should be taking “at the most two weeks rather” is now being done in three to six. “We must improve the Doing Business index in the coffee subsector,” he said.

'Salada instant coffee brand could be compromised by JACRA's demands'