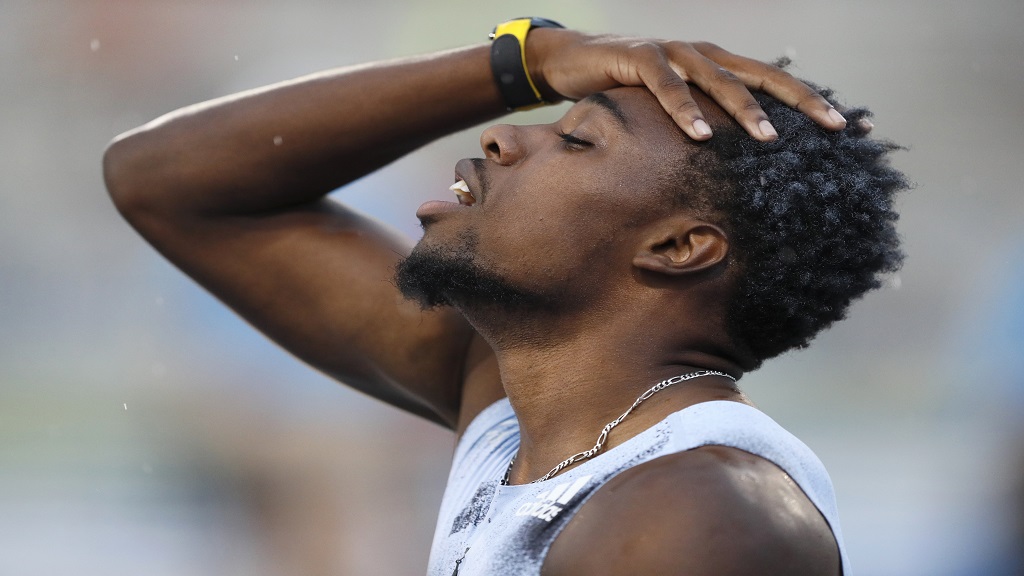 Noah Lyles thought he had shattered the 200 metres world record on Thursday, but the American's joy was short-lived as it transpired he had not run the full distance.

Lyles, running on his own in Florida as part of the Inspiration Games event, crossed the line in a rapid 18.90 seconds.

It appeared the record of 19.19s Usain Bolt set at the 2009 World Championships had gone, but BBC commentator Steve Cram was among those to question the time.

"That cannot be right," said Cram. "Even he has got his hands in the air wondering what is going on."

It was then revealed that world champion Lyles had run 15m less than his opponents competing at other tracks, as he had started in the wrong lane.

The 22-year-old subsequently missed out on a $10,000 winner's cheque, with Christophe Lemaitre taking victory in a time of 20.65 at Letzigrund.

Lyles tweeted: "You can’t be playing with my emotions like this.... got me in the wrong lane smh [shaking my head]."

But it turns out that socially distanced, technologically challenging meets might not be track and field's best plan beyond the coronavirus pandemic.

Sprint great Allyson Felix had a smoother time racing to victories at Walnut, California in a 150-metre sprint and anchoring an American trio in the 3x100 relay.

The six-time Olympic gold medalist timed 16.81 for the 150, also into a headwind, to be 0.34 faster than Shaunae Miller-Uibo racing in Florida. In Switzerland, Mujinga Kambundji was third despite some wind assistance.

“It was very strange and I feel like sort of practice,” Felix said, “but not even because there’s really no teammates or anything.”

Later in the 90-minute worldwide broadcast, a 100-yard dash in Florida brought three men to the same start line. Andre De Grasse won in 9.68, 0.04 ahead of Jimmy Vicaut. Omar McLeod, the 110 metre hurdles Olympic champion, was third in 9.87.

Both pole vault competitions were won in Florida, by Americans Sam Kendricks and Sandi Morris clearing 5.81 metres and 4.66 respectively.

The lack of quality training time and facilities during the lockdown showed in some performances.

Olympic pole vault champion Katerina Stefanidi did not clear her opening height of 4.46 in California. Two-time Olympic triple jump champion Christian Taylor needed a sixth leap to get to 17.27 metres in Florida as the event was won in Portugal by Pedro Pablo Pichardo’s 17.40.

“I think we see what a hardship everyone is going through,” Felix said, “and we just want to bring a little bit of joy, pause a moment and appreciate support.”