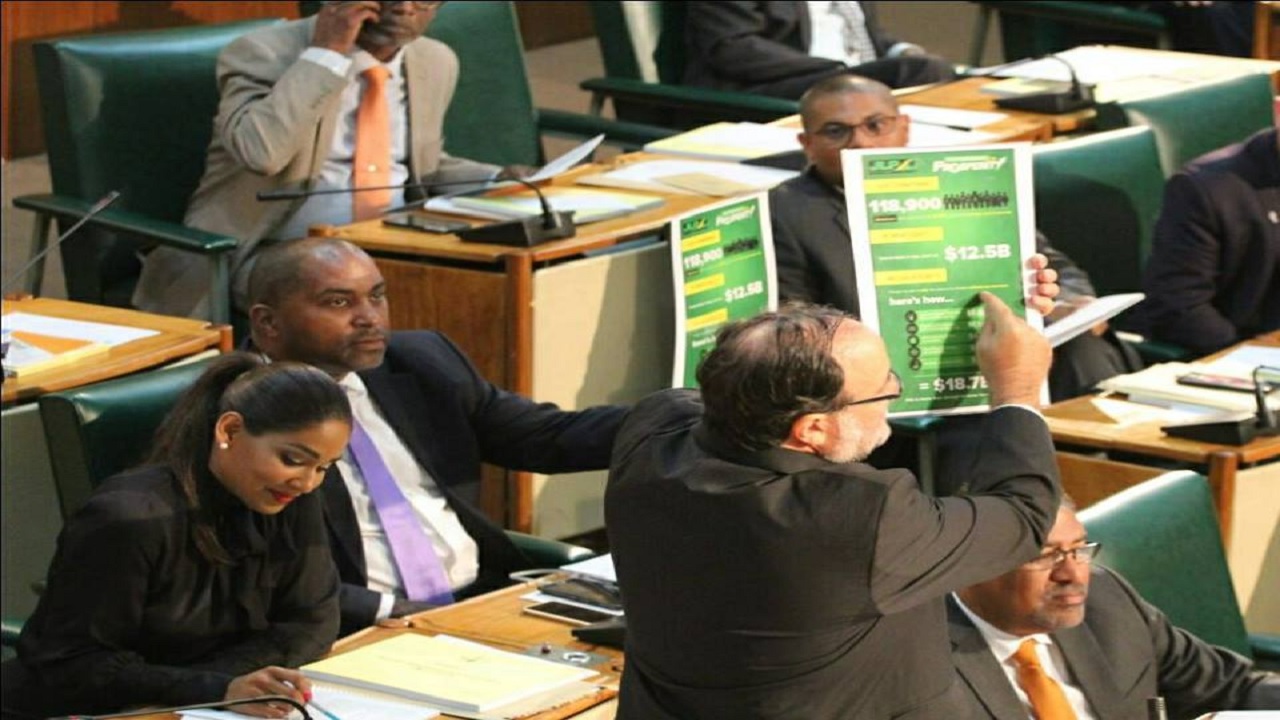 Mark Golding points to the JLP's tax plan during his budget presentation on Tuesday.

Opposition Spokesman on Finance, Mark Golding says the Government's boast of “no new taxes” in the 2018/19 Budget is disingenuous against the background of what he said were huge tax packages the last two cycles.

He made the declaration while making his contribution to the 2018/2019 Budget debate in the House of Representatives on Tuesday, as he described as “political propaganda and fake news” the Government’s $1.5 million income tax break which was imposed after the 2016 General Elections.

Golding said the move to raise the income tax threshold to $1.5 million - an election promise that ultimately got the Jamaica Labour Party (JLP) elected to office, according to political commentators - has caused an increase in social injustice because of $30 billion in new taxes that was necessary to fund the measure.

“Over 100,000 NIS pensioners are worse off. Over 400,000 self employed persons are worse off including farmers, hairdressers and barbers. In other words this government’s tax policy involves the rich getting richer and the poor getting poorer. Prosperity for the few, sufferation for the many,” Golding asserted in his maiden budget presentation.

The opposition spokesman told the House that “the political propaganda at the time said that there would be no additional taxes to pay for it (the increase in the income tax threshold which meant the Government would be giving up significant revenue).”

But Golding pointed out that the government was forced to introduce the $30 billion in new taxes over two budget cycles in 2016 and 2017.

This, he said has shown that “this was a false promise and fake news.”

Golding asserted that “had they (the Jamaican people) realised that the JLP had not thought this $1.5 (million) plan through and that it would in fact cost ordinary Jamaicans an additional $30 billion in new taxes on consumers, that tax plan would never have seen the light of day.”

In the meantime, Golding believes that Government’s boast of “no new taxes” in the 2018/19 Budget is disingenuous as, according to him, there would have been no need to impose $30 billion in taxes over the two previous budget cycles if the income tax plan had not been imposed.

“So Mr Speaker, your no new taxes is three budgets late and your Government is fully responsible for the delay,” Golding said to extended desk thumping from Opposition MPs.