No need for Election Day workers to quarantine for 14 days, says EOJ 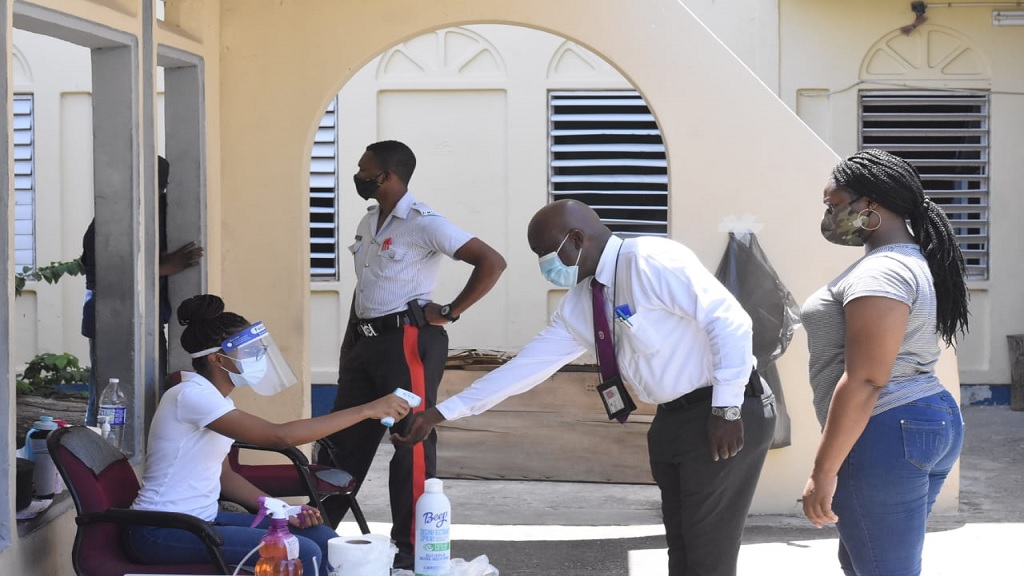 A special services voter has his temperature checked at the Greater Portmore Police Station on Monday. (Photo: Marlon Reid)

The Electoral Office of Jamaica (EOJ) says Election Day workers are reporting they have been informed by their employers that they will be required to quarantine for two weeks after participating in Election Day activities.

The EOJ said it has received similar information from other employees who intend to vote on Thursday.

In a bid to allay the fear of employers and to ensure that it has enough workers to man the several thousand polling stations on Thursday, the EOJ has moved to reassure that the necessary safety precautions will be undertaken. These include mandatory temperature checks, the wearing of masks, continuous sanitisation procedures, physical distancing and the single use of voting pencils by the electorate.

“Consequently, an Election Day worker’s duty on Election Day does not warrant a mandatory 14-day quarantine,” the EOJ said in a statement Tuesday afternoon.

The EOJ said it has also come to its attention that several employers have indicated to staff that they will not be allowed the time-off on Election Day, or will only be allowed two hours.

While stating that employees have the right to time off to vote, the EOJ pointed to the Representation of the People (Leave & Symbols) Regulations, 1944 which states that "...every employer shall permit each of his employees to be absent from work on polling day for three hours in addition to the normal meal hour".

The Electoral Office is also reminding that the law does not apply to persons who commence work at 10am or later or end work at or before 2pm.

Additionally, the EOJ is encouraging persons who intend to vote to make the appropriate arrangements with their employers before Thursday. It is also reminding that the polling stations will open at 7am and close at 5pm. However, electors are encouraged to vote throughout the day, rather than just the first two hours of polling when lines are the longest.

Voters are also reminded to bring their current Voter ID card on Election Day. If individuals do not take their ID card with them, they must answer questions, take an oath of identity and be fingerprinted in order to verify their identity.

Electors with COVID-19 to be allowed to vote - OPM