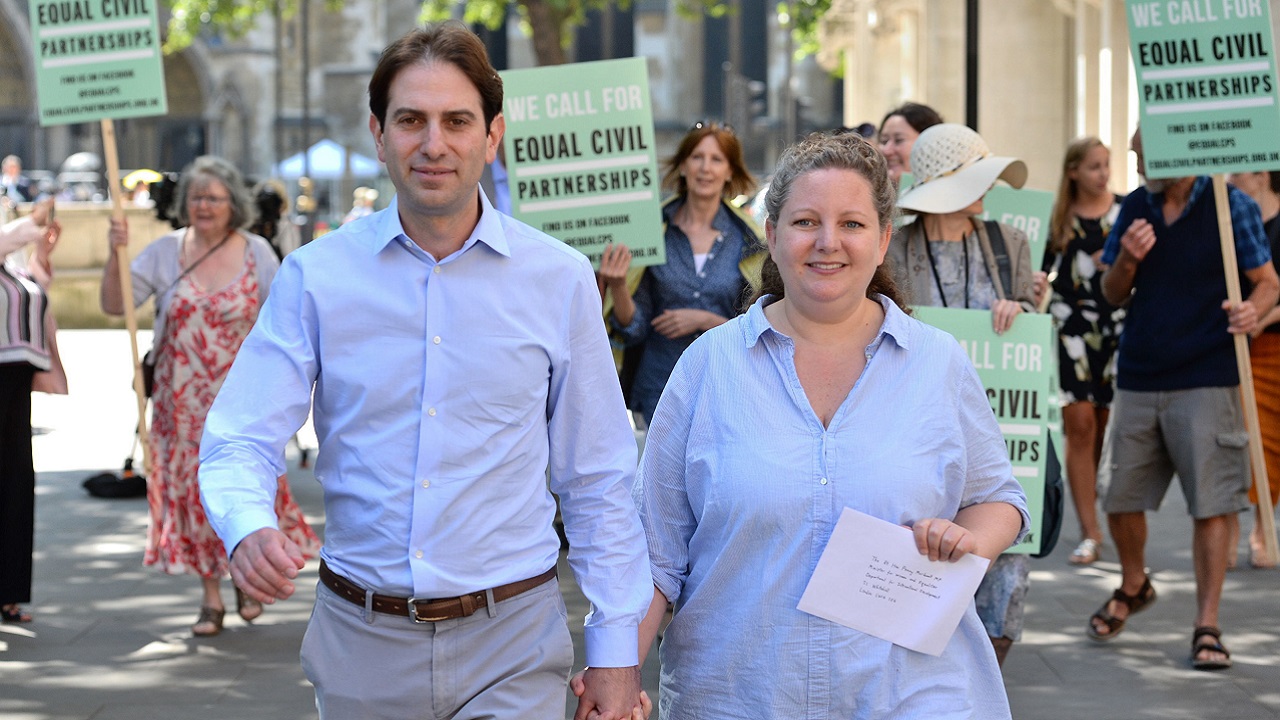 (Image: AP: Rebecca Steinfeld and Charles Keidan outside the Supreme Court in London on 27 June 2018)

Britain's Supreme Court ruled on Wednesday that the ban on civil partnerships for heterosexual couples is "incompatible" with human rights laws, after a couple challenged the legislation.

Rebecca Steinfeld, 37, and Charles Keidan, 41, argued that they face discrimination because only same-sex couples are eligible for civil partnerships.

Gay couples in Britain have been able to form civil partnerships since 2005, giving them the same legal protection, adoption and inheritance rights as heterosexual married partners.

Same-sex marriage became legal in 2014 and now same-sex couples can choose between marriage or a civil partnership, but heterosexual couples can’t.

Steinfeld and Keidan, who met in 2010 and have two children, said the "legacy of marriage" which "treated women as property for centuries" was not an option for them.

"We want to raise our children as equal partners and feel that a civil partnership - a modern, symmetrical institution - sets the best example for them," the BBC quoted them as saying.

The British government has argued it needs time to study the impact of gay marriage on civil partnerships before deciding whether to extend them to everyone, abolish them or phase them out. But in his ruling Justice Brian Kerr wrote that the government position "cannot be characterised as a legitimate aim".

The court decision does not automatically change the law, but Emma Willing, a managing associate at law firm Mishcon de Reya said it will pressure the government to either extend civil partnership to heterosexual couples or to abolish such partnerships.

"In the event that the government did not introduce remedial legislation to amend the incompatible law, it would be open to Rebecca Steinfeld and Charles Keidan to take their case to the European Court of Human Rights," she said.

Rebecca Steinfeld, meanwhile, welcomed the verdict, saying: "Today we are a step closer to opening civil partnerships to all, a measure that would be fair, popular and good for families and children across the country."

Mum shot man who flew round world ‘to attack daughter’

Second man on the Moon: Buzz Aldrin sues his children