Nishikori loses focus but not match to advance at US Open 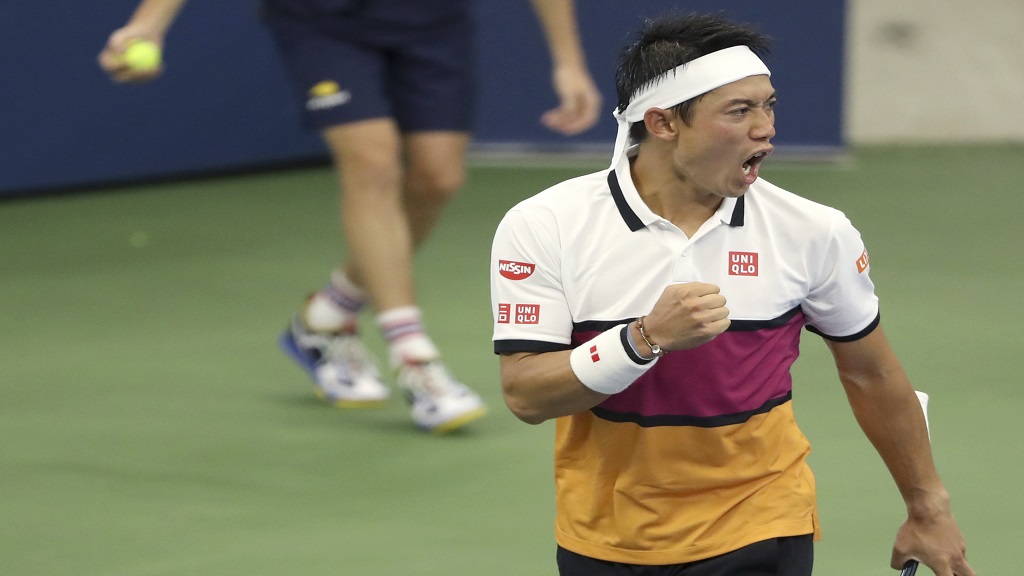 Kei Nishikori, of Japan, reacts after scoring a point against Bradley Klahn, of the United States, during the second round of the US Open tennis championships Wednesday, Aug. 28, 2019, in New York. (AP Photo/Kevin Hagen).

Kei Nishikori lost his focus. At least he didn't lose the match.

The seventh seed from Japan dropped a set, blew a lead in another and let four match points slip away before finally downing American Bradley Klahn 6-2, 4-6, 6-3, 7-5 on Wednesday to advance to the U.S. Open third round and avoid the pitfalls that have forced out half of the top 12 men's seeds.

Nishikori, a finalist at Flushing Meadows in 2014, relied on his strong baseline retrieving game against the hard-serving Klahn, a former NCAA champion at Stanford. But Nishikori appeared to struggle at times, getting only half his first serves in and throwing in a double fault on a break point to help Klahn come back from 5-1 down to tie the fourth set. Four match points slipped away down the stretch before Nishikori prevailed.

"A little bit of lost focus," he said on court after the match. He later added, "I started playing a little bit, not defensive, but I didn't play aggressive. ... That cost me a set. And also the fourth set he almost came back."

Nishikori's was among the first matches of this year's tournament played under the retractable roofs on the two main show courts because of a drizzly rain that began falling early in the morning. That allowed the tournament to keep to its schedule for top matches including Roger Federer, Novak Djokovic, and Venus and Serena Williams.

Under the roof at Arthur Ashe Stadium, third-seeded Karolina Pliskova easily advanced over qualifier Mariam Bolkvadze 6-1, 6-4. Unlike top seed Naomi Osaka and No. 2 Ash Barty, Pliskova has yet to lose a set.

Off the court, No. 12 Borna Coric pulled out the tournament with a lower back strain, giving a second-round walkover to Grigor Dimitrov. That adds to a growing list of men's seeds who are out, including No. 4 Dominic Thiem, No. 8 Stefanos Tsitsipas, No. 9 Karen Khachanov and No. 10 Roberto Bautista Agut, who were all upset Tuesday.

US Open 2019: Djokovic, Federer move into second round