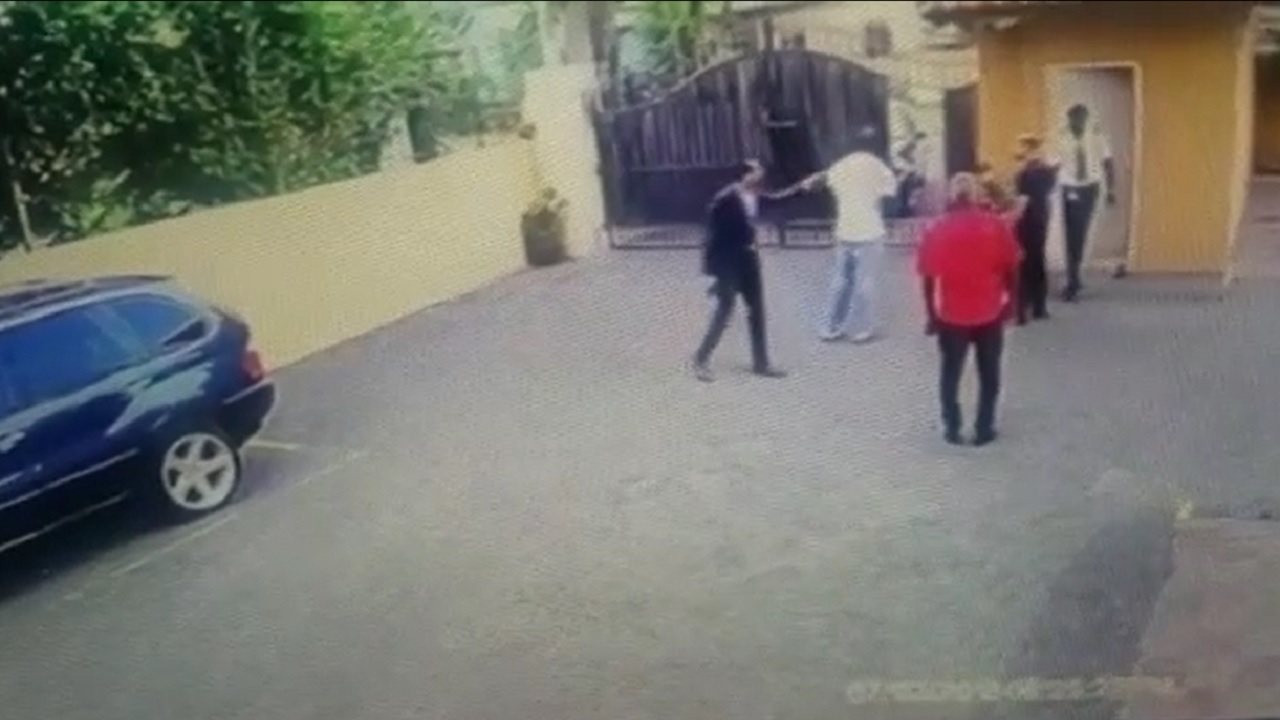 Screenshot of a video showing a dispute between a security guard and other men at Braemar Estate in St Andrew.

New surveillance video footage of Braemar Estate in St Andrew, captured before a licensed firearm holder shot a security guard at the apartment complex, has raised questions over what led to dramatic encounter.

The footage shows a uniformed security guard entering the guard house followed by two men including a man resembling the licensed firearm holder, who closes the door behind him. Another man stands outside the door.

Two men, including the man resembling the licensed firearm holder, are later seen exiting the guard house followed by the security guard who appears incensed at the men.

The man resembling the licensed firearm holder pulls what appears to be a gun from his waist and points it towards the guard who had hurled an item towards him. The video ends with the men still engaged in a heated argument.

The footage raised questions over the version of events amid allegations over who was the aggressor in the affair.

A private email from the property manager, obtained by Loop News, appears to support the version of events promulgated by entertainer Mr Vegas in the previously released altercation video which shows the security guard being shot by the licensed firearm holder.

Mr Vegas had alleged that the security guard had been roughed up and beaten before the arrival of the KingAlarm personnel.

The email, which is addressed to residents of the gated community of Braemar Avenue in New Kingston, is titled 'The incident on Monday'.

"Most if not all of you, would have seen the viral videos in which it appears that (the licensed firearm holder) is being attacked by Mr Brown (the security guard) and then physically restrained by KingAlarm personnel after shooting Mr Brown.

“Unfortunately, the videos do not capture the entire series of events that culminated in the shooting.

“Specifically, it did not capture only minutes before, when according to Mr Brown, (the licensed firearm holder who owns two units in the property) and another property owner … entered the guard house with him in it and closed the door while they beat him with fists and gun…

“Occupants have reported that it was upon hearing a commotion, they called KingAlarm and the police… The viral videos also do not capture when (the licensed firearm holder) pulled his firearm before KingAlarm arrived... This was capture by our surveillance cameras,” the email said.

Asked if he felt vindicated now that the surveillance footage had been released, a penitent-sounding Mr Vegas told Loop Jamaica reporter Claude Mills that "there was no vindication".

"Some things you wish you could re-do, this is one of them. I have to address self, and why waste your days trying to preach black love, it is not worth my sanity, this whole thing has got way out of control," he said.

Mr Vegas accepted that he may have made some missteps and apologised for his role in filming the video which has now gone viral online.

"After watching the whole 20 minutes now that is online,  I accept the wrongs that I did, I was wrong to try to bring peace, and calmness to a hostile situation and wrong to videotape it to try and save lives. I thought that having the camera on would ease the tension. I was wrong to pronounce the youth dead after I heard him gasping for breath and saw him stumbling," he said.

"However, where I was standing with the camera, I could not see what initially transpired between the licensed firearm holder and the security guard because the car was blocking my view. So my first thought when I heard the shot, and saw him stumble away while holding his neck, was that he had been fatally shot

“Based on the fact that I thought that I was doing the right thing to defuse the situation, I was frustrated, and I apologize for some of my harsh comments on camera, but that was out of frustration, and my desire to have the situation de-escalated earlier if they had only listened to me," he said.

He admitted that his "naivete" and "desire of peace" caused him to be pulled into a volatile situation at the expense of his family's well-being.

The artiste will be leaving the island to embark on a European tour this weekend, and he is gearing up for the release of his reggae album, 'Ism'.

Female KingAlarm officer in altercation video is a former cop