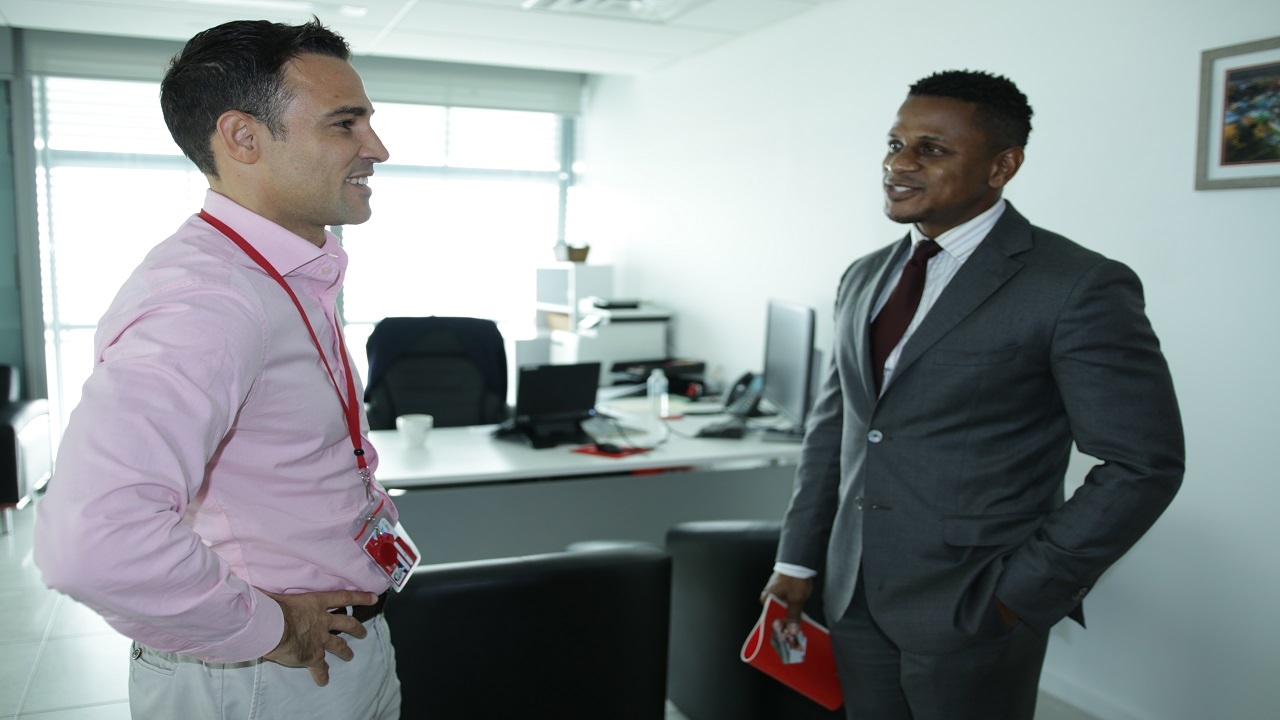 The new US Embassy’s Counselor for Public Affairs Jeremiah Knight paid a courtesy call on the headquarters of Loop News and Digicel where he met a number of  team members.

He also took the opportunity to have a chat with Digicel Jamaica’s new CEO Justin Morin.

Jeremiah entered the United States Foreign Service in the summer of 2003. His first assignment was as a consular officer in Santo Domingo, Dominican Republic and also served in Santiago, Chile.

In Islamabad, Pakistan, he served as the Deputy Spokesperson and Assistant Press Attaché of the U.S. Embassy.  He held the position of Special Assistant to the Assistant Secretary of State for International Narcotics and Law Enforcement. Also while in Washington, DC he took on the role as director of the Hometown Diplomats, Intergovernmental Affairs Programs in the Bureau of Public Affairs, and Special Assistant to the Under Secretary of Public Diplomacy and Public Affairs.

He later worked in the Strategic Planning Office of the Under Secretary of Public Diplomacy and Public Affairs.  Jeremiah returned to the Dominican Republic where he was assigned as the Embassy’s Press Attaché.  He also held the position of Public Affairs Officer at the U.S Embassy in South Sudan.

Jeremiah graduated from Morehouse College in Atlanta, GA and also studied at the University of Westminster in London, England.

After graduating from Morehouse College he worked for 5 months as a marketing apprentice in BP’s global headquarters in London, England. Upon Jeremiah’s return to the U.S. he received the Thomas J. Pickering Foreign Affairs and DACOR-Bacon International Affairs Fellowships. In the fall of 2001, he began his graduate studies at the University of Maryland’s School of Public Policy/International Affairs where he received his master’s degree.

Apart from his work as a U.S. Foreign Service Officer, he has engaged in civic society. During his time in the Dominican Republic he was principally responsible for the creation of Santo Domingo International (SDI), a Dominican non-profit organization based in the Foreign Ministry that sought to provide untenured and junior officers from all diplomatic missions (and NGOs) a forum for intercultural exchanges.

Jeremiah also served as special advisor for public relations to the Board of Directors of the Mount Sinai Holy Church of America, Inc and public affairs coordinator for the organization’s National Youth Convention.  Jeremiah is a columnist for the Manjar Magazine (a magazine dedicated to culinary arts).

Knight has received the State Department’s Superior Honor, Meritorious Honor and the Benjamin Franklin Awards for excellence in public diplomacy. His foreign languages are Spanish and French.

See photo slider with highlights of Knight's visit below.

US Embassy in Kingston celebrates 4th of July - early