New tool launched to tackle waste and excess in government 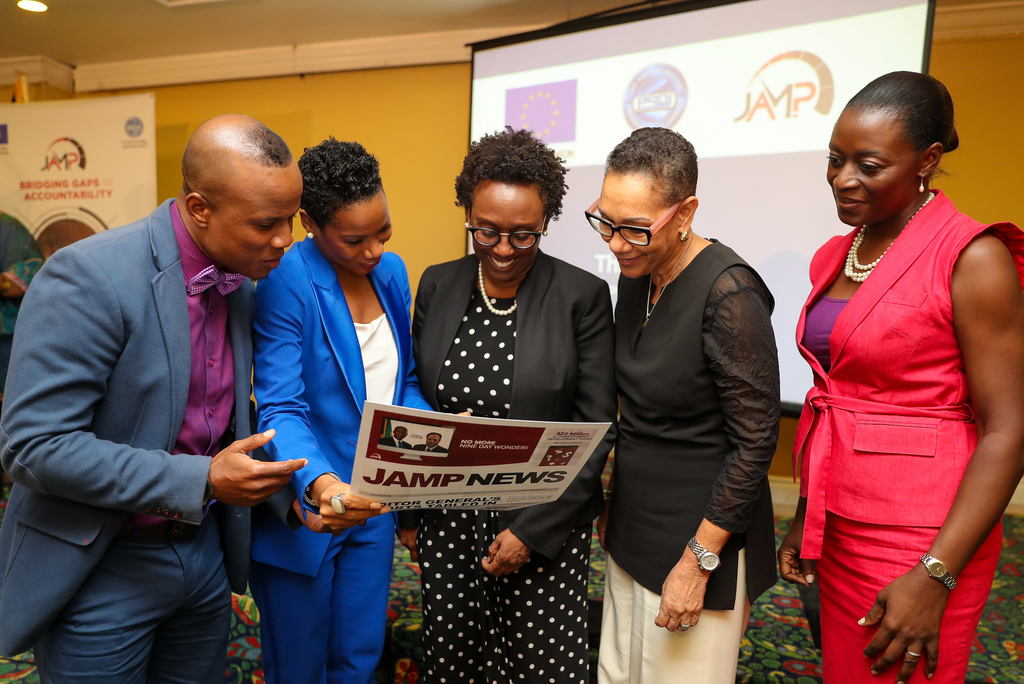 The Jamaica Accountability Meter Portal (JAMP) - a new, online tool which promises to empower citizens in the fight against waste and excess in government – was formally launched on Wednesday.

JAMP is operated as a non-governmental organization (NGO) under the theme “Measuring Accountability in Government” and aims at improving delivery of public goods and services; increasing citizen understanding of government and mobilizing engagement and action among Jamaicans for change.

Founder and Executive Director, Jeanette Calder said: “With JAMP’s online accountability tracking tool, we intend to foster an informed, engaged citizenry, monitoring and taking action to ensure accountable and effective leadership and improved governance in Jamaica. We see ourselves as supporting Governments to improve stewardship of our taxes and other public resources.”

The JAMP website will enable citizens to track the progress of government ministries, departments and agencies in response to the findings and recommendations of reports of the Auditor General's Department and Parliamentary oversight committees; trace the performance of their MPs in key areas; and follow the legislative process from Bills through to the passage of Laws.

The JAMP executive - an architect-turned-researcher-turned advocate – is urging individuals and organisations to utilise the tool, stating that “JAMP is a means of achieving greater value from our taxes, influencing improvement in the quality of representation and decision-making and in the delivery of public goods and services.”

The citizen-friendly interactive website will educate the public on how government functions, provide users with easier access to public officials and an effective means of engagement in public affairs.

In addition to the accountability meter, JAMP serves as a vehicle for citizens’ participation and involvement in other ways including volunteering, subscription, donating, sharing via social media, supporting and promoting calls to action and advocacy.

JAMP’s operations are overseen by a small board of Directors chaired by Howard Mitchell, Immediate Past President of the Private Sector Organisation of Jamaica (PSOJ).

Through a partnership with the PSOJ as Principal Recipient, the initiative has received full grant funding from the European Union to support its programmes for the next three years.

PSOJ President, Keith Duncan, has praised the JAMP project, noting that “The PSOJ places great emphasis on transparency and accountability as we recognise the connection between good governance and development. We are committed to partnering with various stakeholders, both in the public sector and civil society, to support efforts to create a safe society, and to promote a culture of transparency and accountability.”

Head of the European Union (EU) Delegation in Jamaica, Ambassador Malgorzata Wasilewska also adds her support: “The EU has ensured that in all areas of funding in Jamaica dedicated funding is provided to support civil society actions to implement projects which support and translate the respective programme objectives; and the JAMP project is an example of this commitment… The EU, therefore, supports the goals of this project to improve accountability and transparency. It is our belief that a strong civil society will aid the realisation of the Jamaica's Vision 2030 goals, and the EU is committed to being a partner in this development process.”

Auditor General of Jamaica, Pamela Munroe-Ellis, welcomes the Portal, too: “Although our functions and that of civil society organisations are different in nature, the oversight actions that they provide make it possible to establish spaces for cooperation. It is timely and significant initiative, and we welcome this innovative channel as a space for improved accountability and collaboration between citizens, civil society organisations and the government.”

Given these forceful endorsements, Calder is optimistic about the future for JAMP.

“Jamaicans want change. Jamaicans are becoming vocal about their need for transformation. We are banking on the fact that citizens are willing to try something different in order to achieve a different outcome - a culture of responsibility and good stewardship among both public servants and ourselves as citizens.”

PSOJ calls for immediate action to curb violence against children