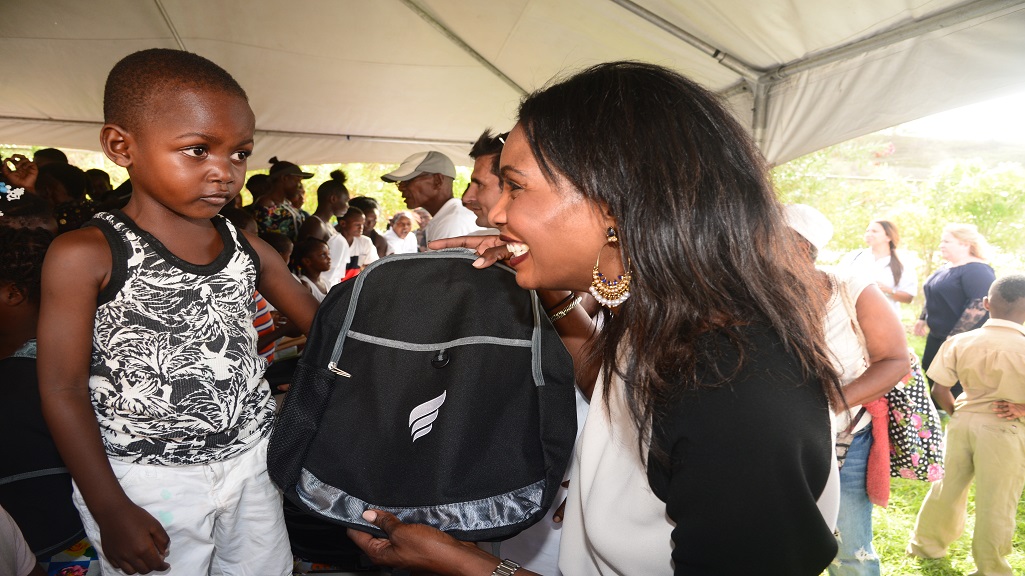 Verona Carter, Vice President, New Fortress Energy shares a moment with a youngster during a previously held fair organised by the company.

During each fair, students will receive a voucher valued at $7,000 to purchase uniforms and school supplies from local-partnered stores, as well as a backpack pre-packed with notebooks, pens and pencils. The company is also partnering with doctors and dentists who will be conducting school medicals and dental examinations. Community barbers will provide haircuts for the boys.

“At New Fortress Energy, we are passionate about playing a key role in fostering the economic and social development of the communities in which we operate. Education is a fundamental tool that can transform lives and provide a pathway to economic prosperity for our next generation of the workforce,” said Verona Carter, Vice President, New Fortress Energy.

“That is what our Back to School Education Assistance Programme is all about. We work with the schools and the community leaders to identify those boys and girls who have huge potential academically but who need financial support to realize their true potential while relieving parents of some of the stresses that come with the back to school preparations,” continued Carter.

Recognizing the importance of STEM in early childhood education, New Fortress Energy has also partnered with Halls of Learning, official partners of the World Robot Olympiad, for the second consecutive year, to deliver a robotics and coding camp to students attending the Back to School Fair in the Jamalco refinery communities on Wednesday.

As part of the NFE’s overall Education Assistance Programme, 50 students attending high schools in its operating communities will also be awarded bursaries of $50,000 each to cover tuition and the cost of CSEC/CAPE exams.

Then in September, approximately 30 students pursuing studies in STEM at The University of the West Indies, Mona, (UWI), the Caribbean Maritime University (CMU) and the University of Technology Jamaica (UTECH), will also benefit from full and partial scholarships to complete their studies.

Since the start of its operations in Jamaica over three years ago, New Fortress Energy has invested over $54 million in awarding scholarships, bursaries and other back-to-school support to over five thousand students across the primary, high school and tertiary levels.

“A big part of our commitment to the sustainable socio-economic development of Jamaica is giving back to the young people in the communities where we operate in meaningful and impactful ways that will empower them – whether it’s through education, skills training or providing the tools and resources to foster entrepreneurship,” added Carter.

New Fortress awarding 1,000 students with back to school supplies