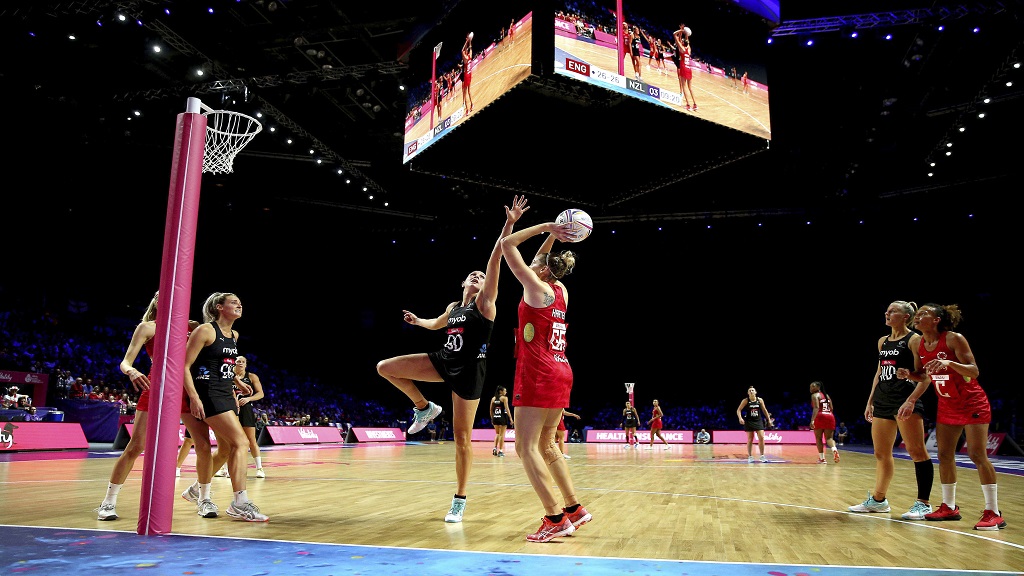 A general view of the match action between England and New Zealand during their Netball World Cup semi-final match in Liverpool, England, Saturday July 20, 2019. (Nigel French/PA via AP).

New Zealand produced a stunning performance as they advanced to the Vitality Netball World Cup final with a 47-45 victory over a brave England on Saturday.

The Silver Ferns repeated their 2015 World Cup semi-final performance to knock-out Tracey Neville’s side, who was backed by an incredible home crowd in Liverpool.

New Zealand had won 13 of the 14 World Cup meetings between the two sides, and the Silver Ferns raced out of the blocks here, as Jane Watson, in particular, forced early errors from England and Maria Folau was a perfect five from five in goal attempts.

The Roses didn’t get off the mark until Helen Housby converted to make it 5-1 four minutes into the contest.

The first goal on the board for the Roses proved to be a kick-start, and they began to settle into the contest, forcing New Zealand into errors of their own, as Jo Harten and Housby reduced the deficit to 6-5.

The frantic start to the contest continued for the remainder of the quarter with both sides’ defensive pressure forcing errors from their opponents as neither side could build a lead. Harten recovered from her slow shooting start to make her final three goal attempts but at the other end, Folau kept the scoreboard ticking for New Zealand as they led 12-9 at the end of the period.

England opened the scoring in the second quarter through Harten and they looked more confident in their all-round play, levelling the contest at 13-13.

A poor pass from Chelsea Pitman allowed New Zealand to retake the lead, and England began to pay for their sloppy passing when in possession and Folau and Ameliaranne Ekenasio shot at 90%.

The Silver Ferns led by six with six minutes remaining until half time, but England once again fought their way back into the contest. Geva Mentor and Eboni Usoro-Brown set the tempo defensively and – energised by the unbelievable noise created by the crowd – the Roses scored ten of the next 11 goals to completely turn the game on its head and lead 24-21 at half time.

Housby, who shot brilliantly in the first half, making 14 of her 16 goal attempts, picked up where she left off making her first goal attempt of the third quarter to answer Folau’s opening goal. New Zealand had the better of the opening exchanges though and they scored three straight goals to level the contest at 25-25.

England were finding a way to keep their noses in front, however, including some superb athleticism from Serena Guthrie as the two sides continued to trade goals.

The back-and-forth continued until a loose pass from Housby allowed New Zealand to force a turnover which Ekenasio converted, giving New Zealand a 32-31 lead.

It was the swing of momentum the Silver Ferns had been looking for and Ekenasio and Folau combined to extend New Zealand’s lead to four before Housby’s last shot of the quarter reduced the score to 36-33.

With the score at 38-34 early in the final quarter, Harten forced a New Zealand turnover which allowed England to reduce the deficit to two. However, the impressive shooting from Folau and Ekenasio didn’t allowed the Roses to build any kind of momentum.

Both sides were beginning to feel the pressure as the quarter ticked on as England once again reduced the deficit to two with five minutes remaining, but New Zealand kept responding as the contest continued to ebb and flow.

Harten made the score 45-43 with two minutes left on the clock, but New Zealand managed to control the tempo and keep possession, as their nerveless shooters helped to take them into a familiar-looking World Cup final.

“I’m proud. The girls gave it their all and we were playing against a world-class team. It was do-or-die, the pressure was on the team and we didn’t start well enough. Some of the basic errors were things we haven’t done during this tournament, and we just didn’t have the legs at the end to get back into the game.”

“Everyone out there did their jobs and did them well for 60 minutes. To play on a stage like that was a pretty special moment.”