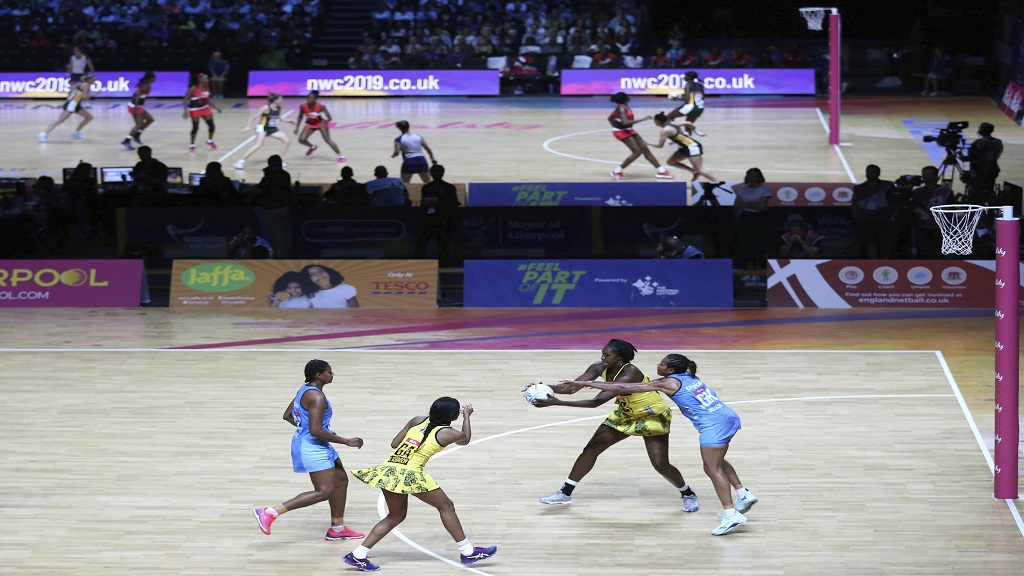 A general view of Jamaica against Fiji, foreground, with South Africa against Trinidad and Tobago on court two during the Netball World Cup match at the M&S Bank Arena in Liverpool, England, Friday, July 12, 2019. (Nigel French/PA via AP).

Jamaica's Sunshine Girls started their campaign at the 2019 Netball World Cup with an 85-29 rout of Fiji at the M&S Bank Arena in Liverpool, England on Friday.

The Sunshine Girls, who are the number two ranked team, raced into a 19-8 lead at the end of the first quarter to set the pattern for the genuine David and Goliath battle.

At half-time, the Sunshine Girls piled up a 35-point lead with the scores at 49-14. Fiji scored eight goals in the first quarter, six in the second, four in the third and 11 in the last quarter.

Captain Jhaniele Fowler led the way for the Sunshine Girls with 33 goals from 35 attempts. Romelda Aiken supported with 26 goals from, 36 attempts, Rebekah Robinson (17 goals from 16 attempts) and Shanice Beckford (11 from 13).

Sixteen teams in four round-robin groups are competing in the tournament.

The bottom team from each group in the first preliminary stage will go into Group E and will play off for places 13 to 16.

Teams finishing first and second in groups F and G will go through to the semi-finals on 20 July, with the top-placed team in each group facing the second team in the other group.

Jamaica and Fiji are playing out of Group C alongside South Africa and Trinidad and Tobago.

SATURDAY'S SCHEDULE
9am Australia vs Zimbabwe
9.25am Northern Ireland vs Sri Lanka
11am New Zealand vs Barbados
11.25am Malawi vs Singapore
3pm England vs Scotland
3.25pm Uganda vs Samoa
5pm Jamaica vs Trinidad & Tobago
5.25pm South Africa vs Fiji