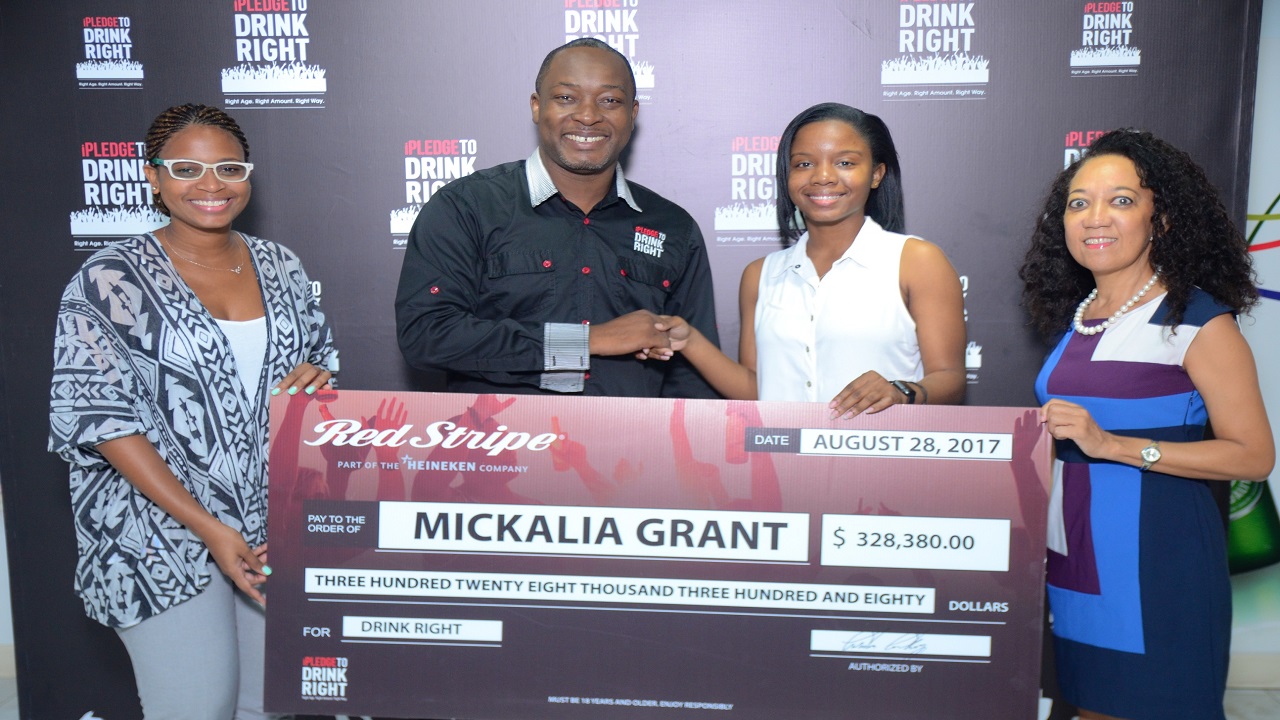 “I developed an affinity for technology at an early age, from as far back as high school and pretty soon I was the go-to person among family members and friends for all things high-tech,” said Grant.

Now at age 20, the NCU fourth year student is majoring in Information Systems with a focus on computer software and hardware. She applied the skills garnered in the programme to influence peers around responsible drinking by participating in the Red Stripe Drink Right App Design Competition.

Launched on December 22, 2016, the competition saw entries from students of various tertiary level institutions across Jamaica, with Information Technology and Computer Science majors at The University of the West Indies, The University of Technology, and NCU among those vying for first place.

Supplied with only the source code for the company’s previous application, students were given one month to conceptualise and execute a completely new and appealing app design.

“When I heard about the Drink Right App Design Competition I was both nervous and excited,” said Grant. “I was nervous about entering the competition because I did not believe I could finish in time for submission, while having to balance studies for my final examinations. However, with the support of my parents, friends and my faculty advisor at NCU, I found the confidence and drive to complete the app, while still passing all my exams.”

An expert panel of information technology and computer science professionals was assembled to evaluate the entries, to assess how well each met the established guidelines.

The main areas of assessment included the incorporation of a Blood Alcohol Concentration calculator that met the standard of the International Alliance for Responsible Drinking, an improved user interface, social media integration, an age verification mechanism, an event calendar, and a user feedback mechanism.

Red Stripe first introduced the Drink Right mobile app in 2015, where it formed part of a broader responsible drinking campaign dubbed Drink Right. Since then, the company has sought to increase the visual appeal of the app and expand its functionalities.

“Our aim is to have more young adults practicing responsible drinking. It made perfect sense to recruit one of them to help us re-design this app,” explained Garth Williams, Red Stripe’s sustainability manager.

“This competition has also given us an opportunity to aid in the progress of Jamaica’s future in software engineering and show the world just how talented our youth are,” Williams said.

Williams added that Che-Andre Gordon, computer scientist and Co-founder of Pionic Works assisted Grant in arranging the final aesthetics of the app and making it more user friendly, but it was Grant who did the work to bring her vision for the app to reality.

In addition to her academic scholarship and a three-month paid internship at the Red Stripe, Grant shared that entering the competition was a fulfilling experience that has contributed significantly to her personal growth and development.

“It was a great opportunity to learn more and channel my passion into something that could really make a difference in the lives of others. I was motivated by the possibility of my design encouraging people to drink responsibly or even saving a life,” she shared.

The newly designed app is equipped with exciting new features and is it expected to be launched later this month.